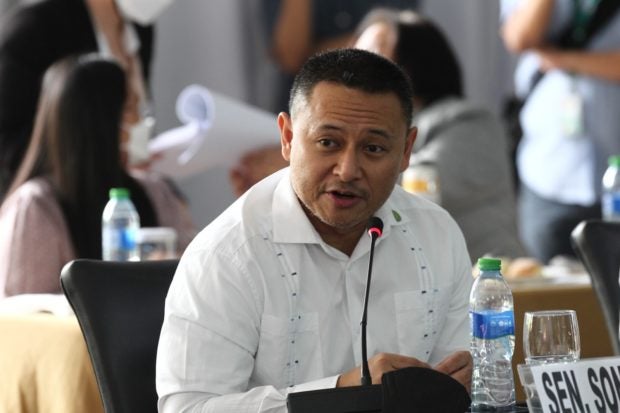 MANILA, Philippines — Senator Sonny Angara on Wednesday said he is “open to giving up” the chairmanship of the Senate committee on finance, even to Senator Imee Marcos.

While he said he would be happy to retain the committee chairmanship, Angara said he is ready to yield as long as it is acceptable to all members of the Senate majority bloc of the incoming 19th Congress.

“I’m happy to continue as a chair of finance kung rerespetuhin ‘yung equity of the incumbent… Sabi ko open naman ako dahil we don’t have an entitlement. Wala naman tayong title dito sa mga committees natin,” he said in a Kapihan sa Manila Bay forum when asked if he would be willing to let go of the post for Marcos.

(I’m happy to continue as chair of the finance committee if the equity of the incumbent will be respected. I said I am open to giving up the post because we don’t have entitlement over the committees.)

Angara said he believes in the upholding of the equity of the incumbent – where incumbent senators are given priority on committee chairmanships – saying a full reshuffle of Senate leadership could ruffle a lot of feathers.

(If you reshuffle all, many will feel bad. They would ask, “Why? Just because the administration has changed? It’s like they didn’t respect our work for the past years.”)

He said respecting the equity of the incumbent has been a “tradition that has been observed over many Congresses” and he hopes it will be followed in the incoming 19th Congress.

Nevertheless, he said it would be okay for him to lose chairmanship over the finance committee and accept other committees if it would help in the smooth workings of the majority.

He said that he is open to changes in the committee chairmanship as long as it is “acceptable to all members of the majority.”

“It’s not a one-on-one arrangement. It’s something na pwede pag- usapan pero (that can be discussed but) at the end of the day, it must be agreed upon by all the members of the majority,” the senator said.

“It’s the will of the majority of the chamber who all carries strong mandates from the people, nationwide mandates. Mayorya talaga ang magsasabi niyan,” he added.

Angara has said Marcos is gunning for the chairmanship of the finance committee. The eldest sister of presumptive president Ferdinand Marcos Jr. is also eyeing the second top post in the Senate, he said.