Pahiyas Festival back but tourists greeted with austere celebration 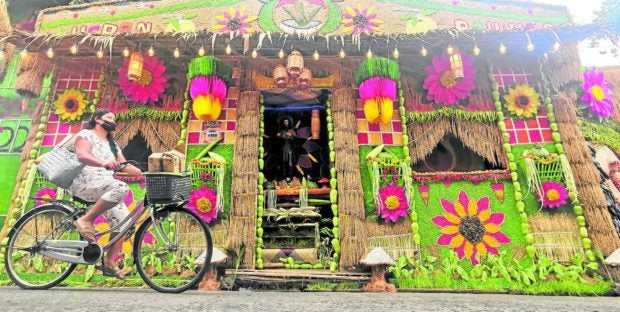 SIMPLE CELEBRATION The most colorful and popular of Quezon province’s festivals, the Pahiyas of Lucban town, is restaged on May 15 after a two-year break due to the pandemic. Visitors, however, notice that houses along the procession route have modest decor made from fresh local produce. —DELFIN T. MALLARI JR.

LUCBAN, Quezon, Philippines — Tourists returned to this farming town at the foot of Mt. Banahaw on Sunday to witness the colorful Pahiyas Festival, which was restaged after a two-year break due to the COVID-19 pandemic.

But many out-of-town visitors said they were somewhat disappointed as the festival’s atmosphere was subdued. They said the displays of colorful “kiping” (rice wafers arranged in chandelier-style artwork), vegetables, fruits and other native products in houses to mark the feast of San Isidro Labrador, the patron saint of farmers, did not live up to their expectations.

Houses along the procession route were barely decorated, with some owners just draping the façade of their homes with whatever festival ornaments and farm produce they could buy from the local market.

“I’ve been here several times in the past and this was not the same Pahiyas as before. Now, there are lots of houses without decorations,” Vic Arias, a visitor, told the Inquirer. Arias came with his high-school batchmates from Tondo, Manila, most of them were there to witness the festival for the first time.

The procession route changes every year to give other house owners a chance to showcase their artistry.

Residents believe that houses along the route are bound to receive special blessings in the coming year.

But with the high cost of living as a result of the pandemic, the quality of the traditional displays had suffered.

“The pandemic also hit us hard,” Berto Sales, 69, a former overseas contract worker, said.He said decorating their houses would entail expenses. “And for most of us, money for decorations to satisfy tourists is last on the list,” Sales said.

Maria Jenifer Babat, Lucban tourism officer, shared the observation of tourists and the sentiments of her townmates.

“We have anticipated this situation,” Babat said.

In 2020 and 2021, the Pahiyas Festival, that put Lucban on the list of must-see festivals in May, was canceled due to the threat of COVID-19.

Babat said that when the local government conducted surveys in preparation for the festival, most homeowners expressed concern about the lack of resources as a result of the pandemic.

She said that with the absence of the festival in the past two years, the traditional recyclable decorative pieces that were left in the storage had been damaged.

Though she noted that some house owners were still able to decorate their houses to vie for the P150,000 award from the local government for the best decorated home. However, only around 600 houses joined the contest this year compared to the more than 1,000 before the pandemic, Babat said.

Quoting Lucban Mayor Olivier Dator, Babat said: “We are celebrating the Pahiyas Festival for us, for the Lucbanins. Kung may puna man sila (If they are disappointed), it’s OK. That’s how it is, we’re in a pandemic.”Babat said they held the festival this year because they wanted to celebrate the feast of San Isidro.

The Department of Tourism, in February, encouraged the local government to stage the festival this year due to the decline in COVID-19 cases, Babat said.