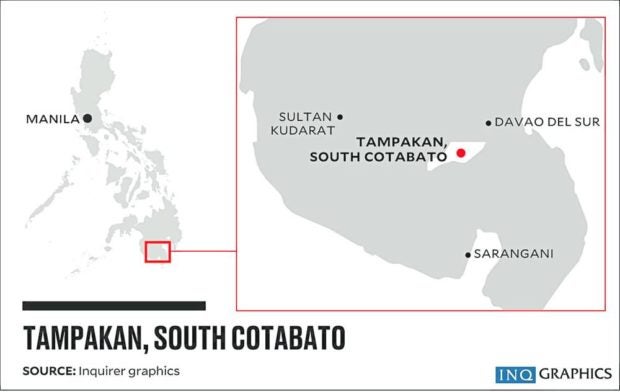 KORONADAL CITY, South Cotabato, Philippines —The lifting of the open-pit mining ban in South Cotabato sparked outrage here with environmental and religious groups calling those who opposed it to join a solidarity march on Thursday.

Different groups in Mindanao on Tuesday voiced their grief over the decision of the Sangguniang Panlalawigan (SP) of South Cotabato on Monday to lift the 12-year-old ban on open-pit mining, which effectively removed the obstacle that stalled the $5.9 billion (about P295 billion) Tampakan project, Southeast Asia’s largest untapped copper and gold minefield pursued by Sagittarius Mines Inc. (SMI).

Bishop Cerilo Casicas of the Diocese of Marbel lamented that the lifting of the prohibition on open-pit mining, the method SMI would employ to extract the deposits, was a sad and tragic day for South Cotabato.

“The future of the province was decided in less than 15 minutes,” Casicas said in a statement on Monday.

But the Chamber of Mines of the Philippines (COMP) lauded the decision of the South Cotabato provincial board, saying the move would help revitalize the mining industry and aid in the country’s economic recovery more than two years after the coronavirus pandemic stalled economic activities worldwide.

“Together with Silangan and Kingking — two other copper-gold projects in Mindanao — Tampakan would be a powerful vehicle to achieve a vibrant, multifaceted local and regional economy that provides sustainable employment, business opportunities, and access to education, health, infrastructure, and other social development programs that will improve and enhance the quality of life of those living in these projects’ host and neighboring communities, including their children,” said COMP chair Michael Toledo.

“The Tampakan Project will be an essential post-pandemic economic recovery tool whose actual and potential benefits far outweigh the potential negative impacts,” Toledo said. “We believe no other sector is likely to provide a more responsible and sustainable alternative.”

No one from among the 11 members of the provincial board present during the session objected and explained their stance in approving the removal of the prohibition on open-pit mining.

The session was presided over by Board Member Glycel Mariano-Trabado, in place of Vice Gov. Vicente de Jesus, who was on leave.

Board Member Ester Marin Catorce, who openly stood against the lifting of the ban, was not present during the session. She was designated as acting governor since Gov. Reynaldo Tamayo was on leave.

Casicas said the saddest tragedy that struck South Cotabato on Monday was that “only 10 persons, SP members all, decided … the fate of almost a million people of the province, not counting the future generation.”

“Clearly, the SP members listened, [but] not to the voice of the people that they represented,” he added.

The Diocese of Marbel, which is staunchly opposing the Tampakan project on concerns over the environment, food security and human rights, vowed to mobilize protest action against the development favorable to the Tampakan propject.

Casicas said it seemed like there was “betrayal” in the decision of the provincial board, noting, among others, that the results of the public consultation in February was not tackled by the plenary.

The Legal Rights and Natural Resources Center (LRC), which campaigned for the repeal of the Philippine Mining Act of 1995, described the decade-long ban on open-pit mining in South Cotabato as a model for other local governments in integrating environmental conservation to development.

“It is tragic that the provision banning open-pit mining in their landmark ordinance has been lifted. The province changed its stance from protecting the environment and ensuring sustainability for generations of its constituents to supporting the profit-driven exploitation of the environment,” LRC said in a statement.

The Tampakan project is touted as the largest undeveloped copper-gold minefield in Southeast Asia and among the biggest of its kind in the world. It has the potential to yield an average of 375,000 tons of copper and 360,000 ounces of gold in concentrate per annum in the expected 17-year life of the mine.

SMI has repeatedly vowed to employ “responsible mining” in the Tampakan project.