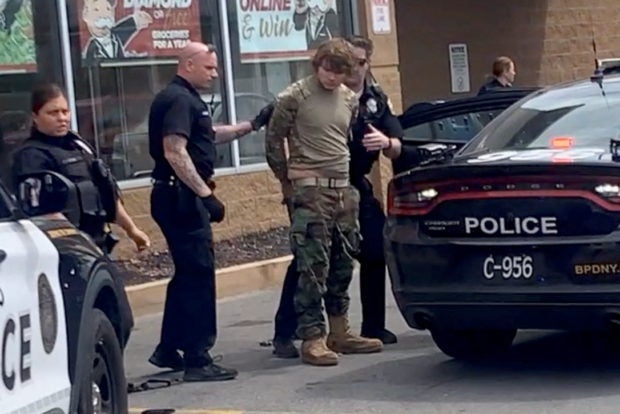 A man is detained following a mass shooting in the parking lot of TOPS supermarket, in a still image from a social media video in Buffalo, New York, U.S. May 14, 2022. (Courtesy of BigDawg/ via REUTERS)

MANILA, Philippines — There are no Filipino casualties in the grocery shooting incident in Buffalo, New York that resulted in the death of 10 people, the Philippine Consulate there said Sunday.

Consul General Elmer Cato said there are 540 Filipinos in Buffalo, where the shooting incident happened.

Initial reports received by @PHinNewYork indicate no Filipino casualties in mass shooting incident in Buffalo, New York this afternoon that left 10 people dead. There are more than 540 Filipinos in Buffalo. https://t.co/jxtQH4wLYX

The shooting was carried out by an 18-year old gunman who also left three people wounded, said a Reuters report.

Authorities said the white suspect, who was armed with an assault-style rifle and appeared to have acted alone, came to Buffalo from a New York county “hours away” to target the store in a predominantly black community.

Authorities said the case would be investigated as a hate crime and an act of “racially motivated violent extremism.”