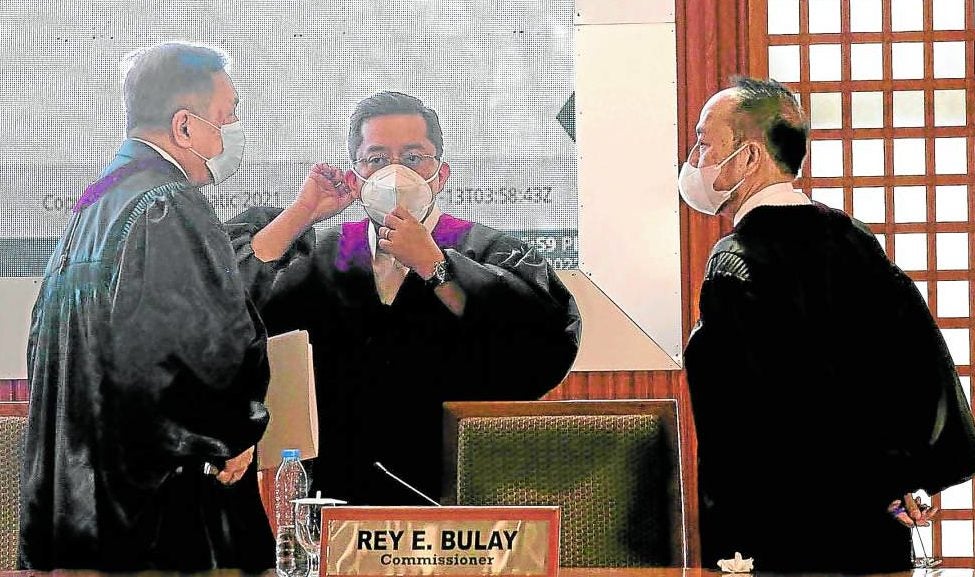 POLL ARBITERS Commission of Election Chair Saidamen Pangarungan, Commissioners George Garcia and Rey Bulay huddle during a break in the canvassing for senators and party list representatives at the Philippine International Convention Center in Pasay City. —RICHARD A. REYES

The Commission on Elections (Comelec) has taken a neutral stand on President Duterte’s call to abolish the party list system, saying it cannot be abolished without amending the Constitution.

John Rex Laudiangco, acting spokesperson for the Comelec, said it was not up to the poll body to decide on whether or not to abolish the party list system.

“These matters are within the wisdom and jurisdiction of Congress,” he said, adding that the poll body will have to comply with what is provided for by election laws.

“For as long as there is that law providing for the party list system, we will comply with that,” said Laudiangco, referring to Republic Act No. 7941, or the Party-List System Act, which then President Fidel Ramos signed into law in 1995.

The Party-List System Act was enacted in compliance with Section 5, Article VI of the Constitution, which instituted the party list system, that was meant to enable marginalized sectors to get congressional representation.

The marginalized sectors included “labor, peasant, urban poor, indigenous cultural communities, women, youth and such other sectors as may be provided by law, except the religious sector.”

But in 2013, the Supreme Court clarified that the party list is a system of proportional representation open to various kinds of groups and parties and not exclusively to marginalized sectors.

On March, poll watchdog Kontra Daya said the majority of the 177 party list groups seeking at least one sectoral seat in the House of Representatives in the May 9 elections were linked to powerful interest groups.

Kontra Daya said at least 120, or 67 percent, of the 177 party list groups accredited by the Comelec were either connected to political clans, big business, incumbent politicians, the government or the military; have pending court cases or criminal charges; or have dubious backgrounds.

Duterte made no such calls for the abolition of the party list system at that time.

But on Thursday, Duterte urged presumptive president Ferdinand Marcos Jr. to push for the abolition of the party list system and an amendment of the Constitution, which he also tried, but failed, to accomplish in the past five years. INQ