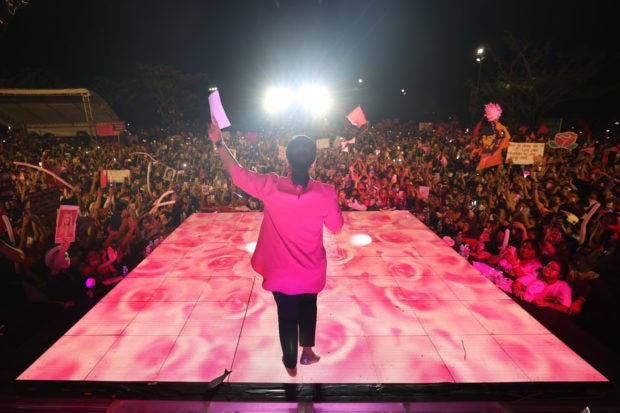 MANILA, Philippines — Still no concession from Vice President Leni Robredo, but she appealed to her supporters on Friday to accept the decision of the majority.

During the thanksgiving event of the Leni-Kiko tandem and slate at the Ateneo de Manila University, Robredo said their “data teams” have been monitoring the vote counting.

Robredo also reiterated her message last Tuesday morning – after initial partial and unofficial results from the Commission on Elections (Comelec) came in – that they should not be responsible for the creation of further divisiveness in the country.

Robredo’s statements were similar to the remarks of her spokesperson, lawyer Barry Gutierrez, who said in an interview with OnePH’s Sa Totoo Lang on Thursday that while there are questions surrounding the May 9 elections, they are not questioning the election results at this point.

READ: Robredo spox: We want clarity on issues, but we’re not questioning results at this point

The story is the same for their running mates with Davao City Mayor Sara Duterte-Carpio obtaining 31.55 million votes and Senator Francis “Kiko” Pangilinan having 9.230 million votes.