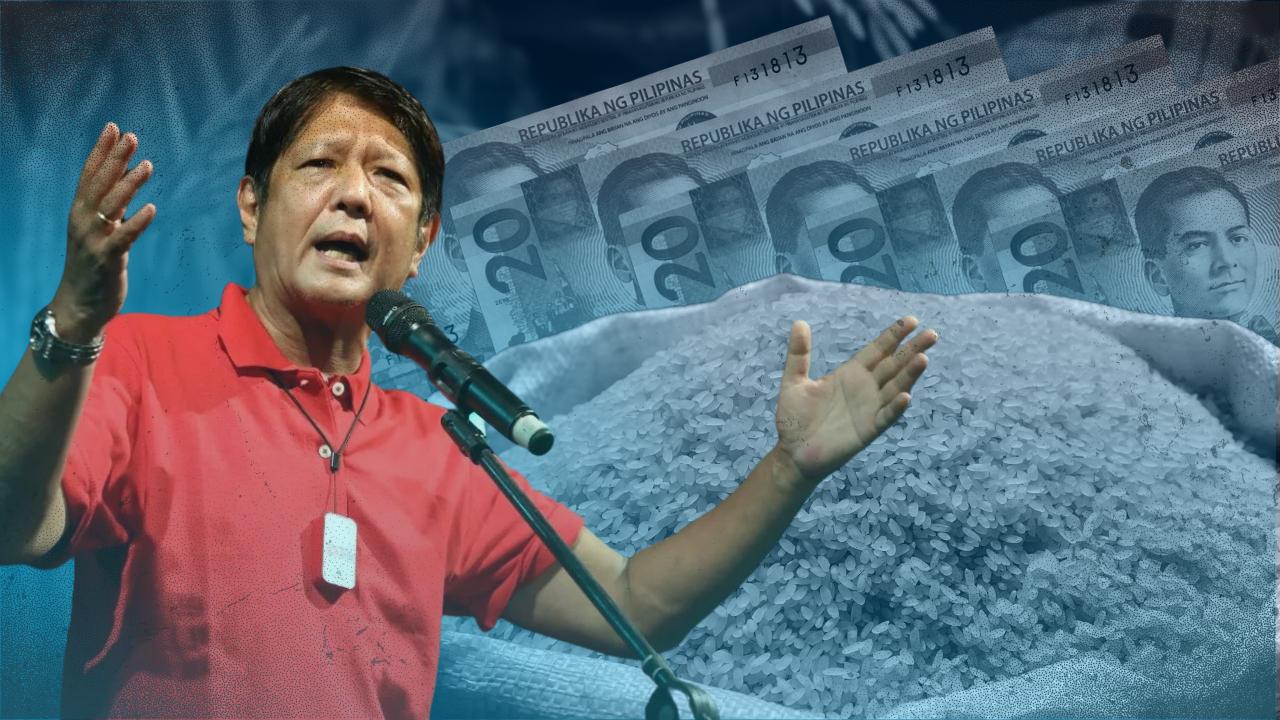 MANILA, Philippines—As former senator Ferdinand “Bongbong” Marcos Jr. became the clear winner in the presidential race, people are in a wait-and-see mode on how he would run the country.

Marcos remained the frontrunner in the 2022 presidential race as he garnered 31,088,020 million votes, equivalent to 58.7 percent of all votes counted as of 5:02 p.m. on Wednesday (May 11) based on the electronically transmitted results received by the Parish Pastoral Council for Responsible Voting (PPCRV) from the Commission of Elections’ transparency server.

Now considered as the presumptive president, who will soon replace current President Rodrigo Duterte, many people eagerly await how the only son of the late dictator Ferdinand Marcos will run his administration amid the lack of clear policy platforms during the campaign period.

Although throughout the campaign, Marcos ran on a platform of “unity”, he—on several occasions—has stated some of his plans and promises if elected as the next Philippine president.

In this article, INQUIRER.net looks back at one of Marcos’ glowing promises—which has gained the attention of many Filipinos: the lowering of rice price, or as many calls it, the “P20 rice” promise.

Bring down price of rice in PH

In April, Marcos said subsidizing the price of rice will be among the options he will look into in his first year in office.

If elected as president, Marcos promised to bring down the price of rice to as low as P20 to P30 per kilo by recommending a price cap on the staple. 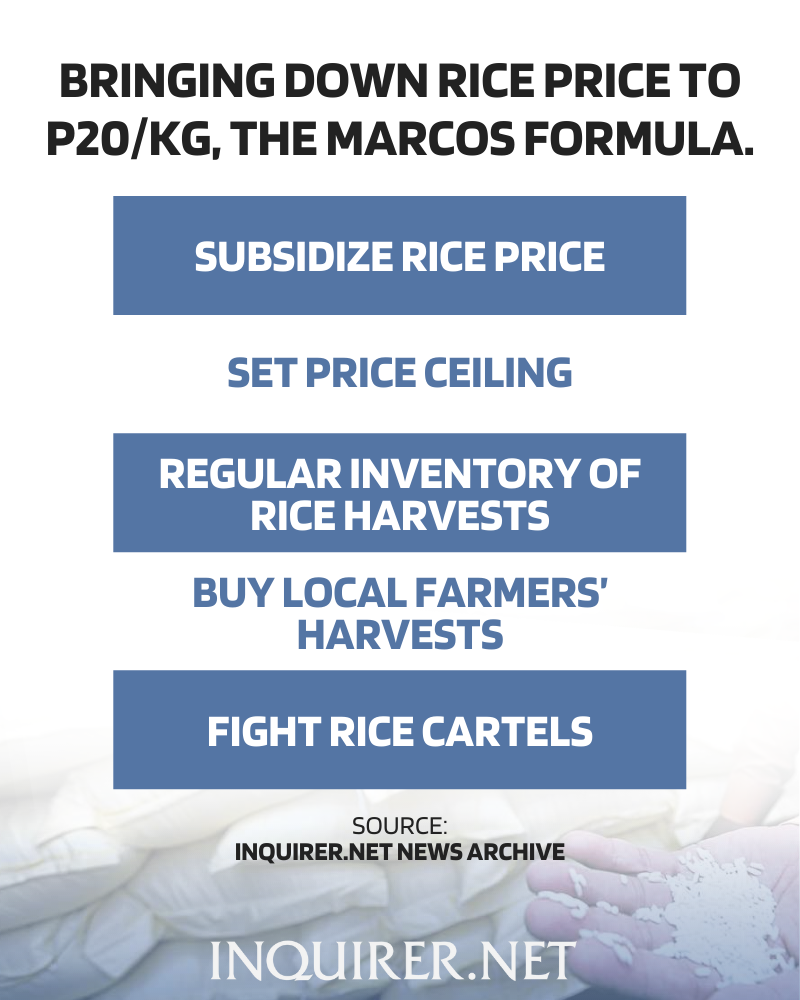 To achieve this goal, Marcos said there must be a regular and thorough inventory of rice harvests in the country through the Department of Agriculture (DA) and the National Food Authority (NFA)—which will both procure rice harvests from local farmers at higher and more competitive prices.

According to Marcos, this will prevent rice cartels from controlling the supply.

Peasant group Kilusang Magbubukid ng Pilipinas (KMP), however, reacted with disbelief to Marcos’ promise to bring down the price of rice to P20 per kilo, saying it looked familiar—the candidate’s father, Ferdinand Marcos, had already tried it through Kadiwa Stores, which KMP said “miserably failed.”

The farmer leader said bringing back Kadiwa Stores to every barangay was, indeed, one of Marcos Jr.’s campaign promises.

The Kadiwa store system was a government program during the late dictator’s era, which was introduced supposedly to help bring down the prices of agricultural commodities, including rice. 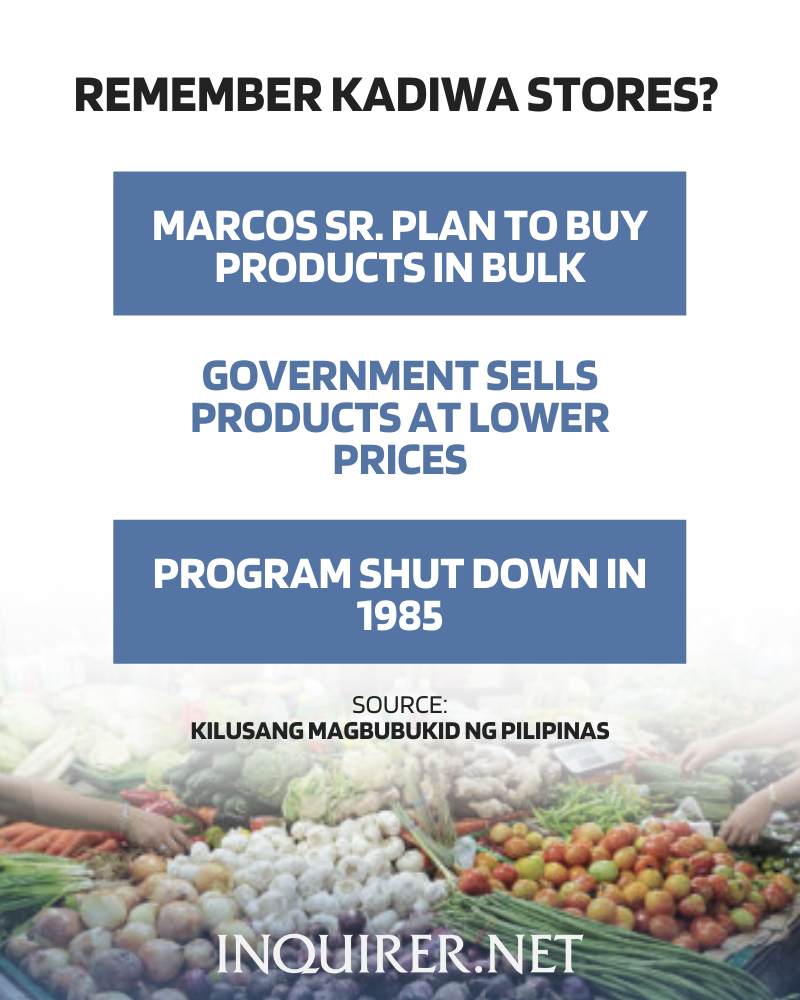 “Started in 1980, the Kadiwa program was meant to provide basic commodities, procured by the government in bulk, at affordable prices. It was backed by four government agencies all headed by Imelda Marcos,” said Ramos.

“Costing the government P18 million within two years, Kadiwa was characterized by hoarding, raids, and by 1983, empty rice shelves. By May to November 1984, rice prices even surged by 25.9% to P5.35/kilo, eating up a third of the then P16 daily minimum wage.,” he added.

“Why would we repeat another failure? But then again that pretty much sums up Marcos Jr.’s candidacy,” Ramos said, adding that the presidential candidate’s agricultural promises were just a rehash of his late father’s programs.

The only sustainable way to make rice affordable, according to KMP, is through increasing local production.

“Marcos Jr. has had numerous opportunities to push laws for the development of the Philippine’s rice industry – but what has he done? Marcos Jr. had multiple terms in Congress during the 30 years of public service he has boasted, yet he has repeatedly snubbed pro-farmer bills,” said Ramos.

“How can we believe the words of someone who has sidelined us farmers for years? Tigil-tigilan kami ni Bongbong,” he added.

In a recent interview, Albay Rep. Joey Salceda, an economist, said Marcos’ campaign promise to bring down the price of rice to P20 was impossible to achieve.

“You can bring it down to P20, but you will kill 3.4 million rice farmers,” he told the reporters. However, the lawmaker said Marcos might have only been misquoted. 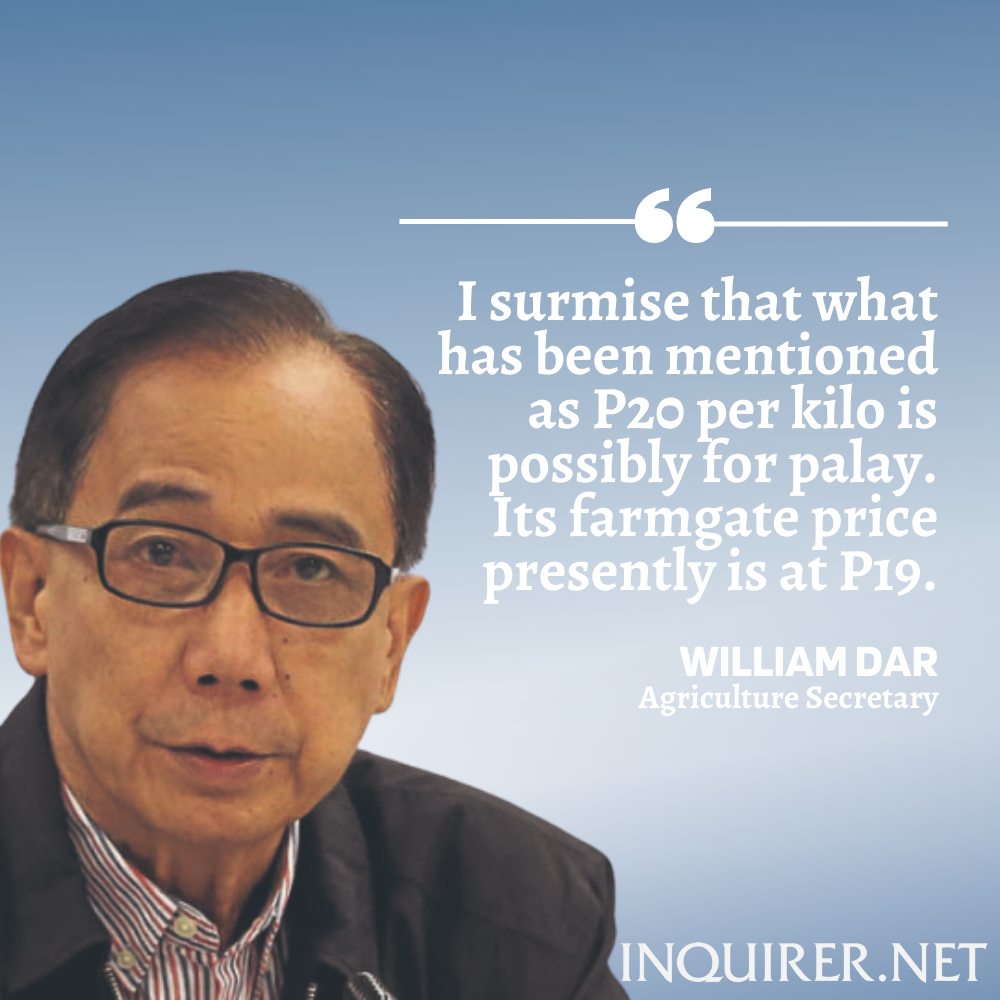 Agriculture Secretary William Dar shared the same sentiments, explaining that Marcos might be talking about lowering the farmgate prices of palay, not rice, which is currently at P19 per kilo.

“I surmise that what has been mentioned as P20 per kilo is possibly for palay. Its farmgate price presently is at P19. So, for me, I am supporting the idea to make it P20 to increase the income of our farmers,” Dar said at an online seminar last May 11.

Even if Marcos was pertaining to the price of palay, members of the Pambansang Kilusan ng mga Samahang Magsasaka (Pakisama) said at a press briefing last month that implementing such a policy would be alarming.

Rene Cerilla, legal and policy advocacy officer of Pakisama, explained that at that time, the price of palay stood at P12 per kilo, while milled rice is sold at the market for P42 per kilo.

“If they implement that P20, the farmgate prices might plunge to P6—which makes a stick of cigarette more expensive than a kilo of palay,” Carilla added.

Based on data from the Philippine Statistics Authority (PSA), the price of regular milled rice was at a nationwide average of P38.50 per kilo in March.

Given the said data, former National Economic and Development Authority (NEDA) director-general Cielito Habito explained that lowering the price of rice to P20 would imply a price of P18.50 to as low as P8.50 per kilo of regular milled rice.

“He may not know that as a rule of thumb, the farmgate price of unmilled palay is about half the retail price of milled rice, given milling recovery efficiency, and costs of milling, transport, and logistics through the supply chain,” Habito said in a column published on INQUIRER.net.

“His promised P20 rice price thus implies a farmgate palay price of about P10 per kilo — well below the P12 to P15 farmers cite as their production cost. No wonder farmers’ groups aren’t jumping for joy over his P20 promise,” he added.