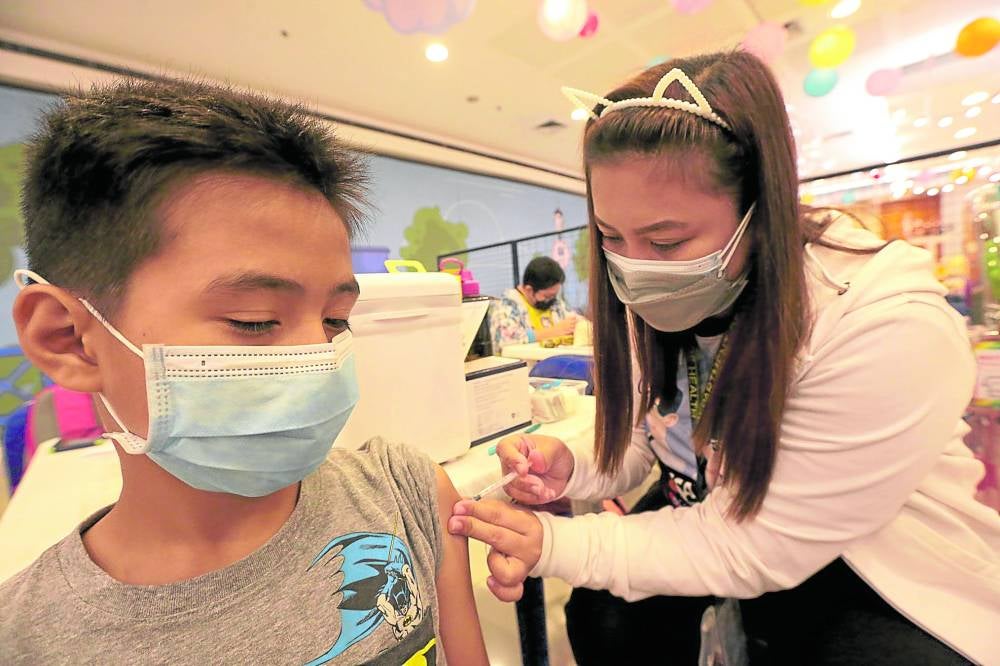 PEDIATRIC VACCINATION A boy reacts with his eyes as he is administered a COVID-19 vaccine dose during an inoculation drive in Marikina last month. —GRIG C. MONTEGRANDE

A group of concerned citizens asked the Supreme Court on Thursday to declare null and void for being unconstitutional several of the government’s COVID-19 related policies, including a resolution issued by the Inter-Agency Task Force for the Management of Emerging Infectious Diseases (IATF) on mandatory vaccination.

The petition for certiorari, prohibition, and mandamus with urgent application for writ of preliminary injunction and/or temporary restraining order was filed by a group of 15 petitioners, including members of the Concerned Doctors and Citizens of the Philippines, Covid Call to Humanity, Legal Lightworkers for Life and Liberty, and Juan Dakila Movement.

Since last year, they have been calling out the government for supposedly forcing Filipinos to get vaccinated against COVID-19 and implementing policies that discriminate against those who refuse.

The petition mainly cited IATF Resolution No. 148-B issued on Nov. 11, 2021, which requires employees in private and public establishments doing on-site work to be fully vaccinated.

“We have a very powerful and comprehensive legal case against these government bodies,” said lead petitioner Nicanor Perlas.

“The science and the law do not support the assailed executive issuances of these agencies. The COVID-19 vaccines are not safe and effective. Many authoritative scientific studies and data from prestigious government agencies show that the vaccinated can still get sick with COVID-19, can still end up in the hospital, and still die from the disease,” he added.

“In addition, the vaccines themselves have killed tens of thousands and harmed millions as revealed by official government statistics around the world,” Perlas said.

The government, especially the Department of Health and the National Task Force Against COVID-19, has repeatedly assured the public that COVID-19 vaccines are safe and effective as shown by legitimate studies and health experts.

It has also cited “minimal” cases of adverse side effects, especially among minors given the COVID-19 vaccine developed by Pfizer.

“We hope that the Supreme Court will be open and take judicial notice of the massive amount of legal evidence against mandatory vaccinations that we have presented. If the people feel that government leaders have failed them, they should still be able to rely on the courts to uphold the Constitution and the Bill of Rights,” said Juan Dakila convener lawyer Aaron Soguilon, a member of the petitioners’ legal team.

As of May 11, more than 68 million Filipinos had been fully vaccinated against COVID-19, or 62 percent of the country’s more than 110 million population. Only 13.5 million, however, have availed themselves of booster shots.

The government’s goal is to fully vaccinate 90 million people before President Duterte leaves office by June 30.

Read Next
Palace names transition team members
EDITORS' PICK
Geek out at TOYCON 2022 powered by Smart Signature
UK’s Boris Johnson will resign, BBC reports
High inflation: Your P1 is now worth only 87 centavos
High-risk pregnancy: Reducing your risk is in your hands
Unemployment rate up to 6% in May
House energy committee chair Arroyo bats for cheap electricity
MOST READ
Suspect in grisly killing of missing woman in Bulacan arrested
Kim Atienza’s daughter flaunts bikini body in response to critics of her ‘revealing photos’
AFP on Garcia conviction: We learned our lesson, instituted steps vs corruption
Cop slain in Isabela ambush
Don't miss out on the latest news and information.