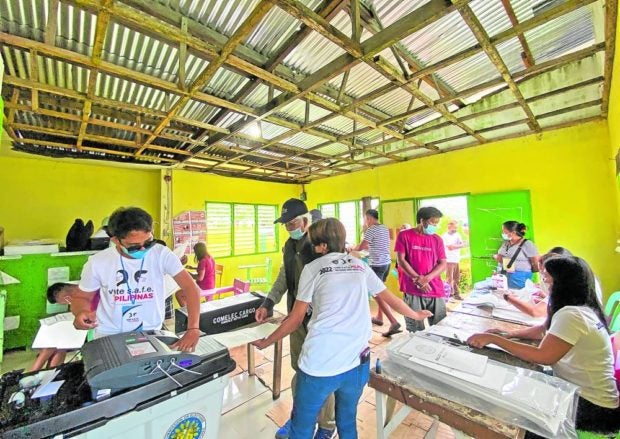 Teachers turn a storm-damaged office at Paniog Elementary School in Basilisa, Dinagat Islands, into a polling precinct during the May 9 elections. (ERWIN M. MASCARIÑAS / INQUIRER)

MANILA, Philippines — Teachers who worked overtime on election day this year shall receive an “additional honoraria”, the Commission on Elections (Comelec) assured Thursday.

While there is no data yet on how much the additional honoraria will be, Comelec acting spokesperson John Rex Laudiangco said that a similar honoraria was distributed in 2019.

(To our heroic teachers and electoral boards, do not worry. This is not the first time that the Comelec will provide an additional honoraria, it’s not necessarily an overtime pay.)

(We did this in 2019 for the electoral boards that served beyond their supposed hours. To our electoral boards, do not worry, the Comelec will process this just like what it did in 2019.)

Laudiangco said that under the law, the honoraria within 15 days from the day of the elections.

(The Comelec will ensure that this will be given to them within the timeframe allowed by law. That’s absolute. There are no excuses and we will give them that.)