Camp says holding of Marcos-Duterte joint thanksgiving is in place 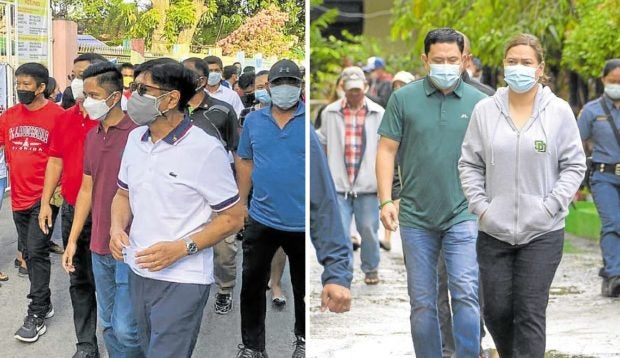 MANILA, Philippines — The holding of a “joint thanksgiving” between tandem Ferdinand Marcos Jr. and Davao City mayor Sara Duterte-Carpio, who have overwhelming leads in the 2022 presidential and vice presidential race, is “in order,” the former senator’s camp said Wednesday.

This is to celebrate the “tremendous” and “overwhelming” support of the Filipinos for the duo, the both of whom got 31 million votes, based on the partial and unofficial count on the Commission on Elections’ (Comelec) transparency server, reflecting 98.31% of election returns.

“I think a joint thanksgiving is in order with the tremendous and overwhelming vote that they have received from the great majority of the Filipino people at 31 million more or less tingin ko ko dapat magkaroon ng isang thanksgiving,” Marcos spokesman Atty. Vic Rodriguez said in a press briefing.

He said the thanksgiving would be similar to the three legs of miting de avance the tandem held to cap off the election campaign last week.

(There should be a thanksgiving for the millions of people who supported — and even those who did not — Marcos and Duterte because the politicking is over, the election is over, the great majority of the Filipino people have chosen.)

The Marcos-Duterte tandem has overwhelming leads of votes over their opponents with both of them getting 31 million votes.

This is according to the Comelec’s transparency server reflecting 98.24% of election returns.