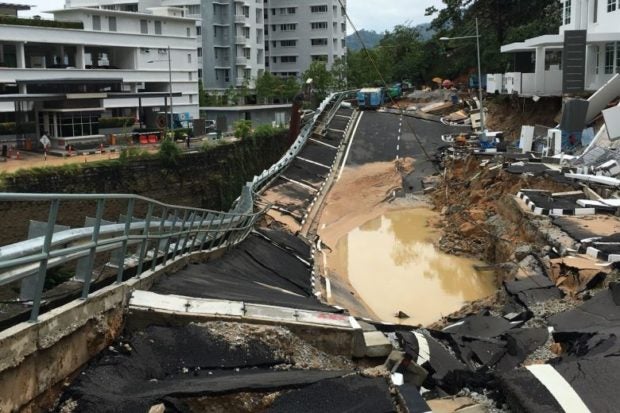 A sinkhole caused by a landslide in Tanjung Bungah. The state’s worst floods caused more than 3,500 people to be evacuated from Penang, mostly on the mainland. FILE PHOTO: The Star/Asia News Network

GEORGE TOWN, Malaysia — Continuous rain since 6am has caused flash floods in some low-lying areas in Penang, Malaysia on Wednesday (May 11).

State welfare and environment committee chairman Phee Boon Poh said among the affected areas in northeast district were the junction of Jalan P.Ramlee and Jalan Terengganu.

He also said that Lebuh Kimberley,Lorong Ngah About, Jalan Pintal Tali and Lebuh Cintra in George Town were also affected.

Phee added that the water level at the affected areas were between 100mm to 300mm and the continuous rain caused these areas to be flooded for about one hour.

He said the Penang Island City Council (MBPP) Prangin station recorded 95mm of rainfall at about 6am.

The continuous rain also caused some part of the southwest of Penang island to be inundated with water.

Meanwhile, the heavy rain has caused massive traffic congestion at Tun Dr Lim Chong Eu Expressway when water flooded the middle of the road in front of the Mutiara Height condominium.

The MBPP has conducted excavation work to create a waterway at the expressway.

“Road users are advised to use alternative routes to avoid traffic congestion in the area,” it said in its Facebook post.

Floods in Malaysia displace over 29,000 people