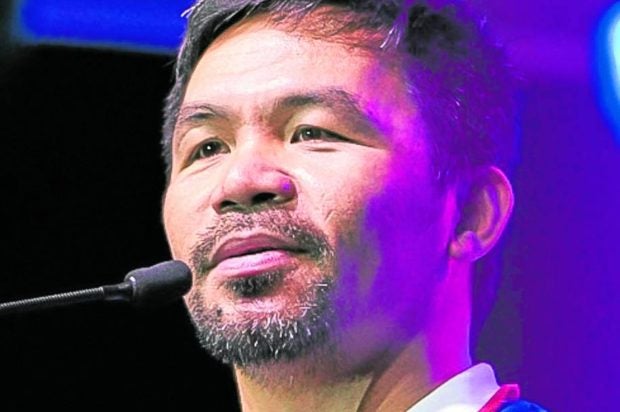 MANILA, Philippines — While confident that the poor will help secure his victory, Sen. Manny Pacquiao on Monday called on Filipinos to report any plans or attempts to commit fraud in the 2022 elections.

Atienza, who wore a red shirt, cast his vote on a wheelchair as he is still recovering from a knee surgery.

On the eve of the May 9 elections, Pacquiao said he attended a church service as part of his preparations for Election Day. On Monday morning, he, his family and supporters prayed together before traveling to Kiamba town to vote.

He only voted for 10 senatorial candidates who “passed my qualifications,” like former actor, martial artist and Rep. Monsour del Rosario, who is seeking a Senate seat.

Pacquiao said he had yet to decide as to where he would await the results of the presidential race, although it was likely that he would wait in his home turf in General Santos City.

He denied that he skipped the long queue of voters and maintained that he lined up and waited for his turn like everybody else.

Read Next
Partial, unofficial tally: Marcos has 30M votes, Robredo 14M
EDITORS' PICK
Geek out at TOYCON 2022 powered by Smart Signature
Unemployment rate up to 6% in May
Bye bye Boris: UK PM Johnson bows out with regrets but no apologies
House energy committee chair Arroyo bats for cheap electricity
High inflation: Your P1 is now worth only 87 centavos
High-risk pregnancy: Reducing your risk is in your hands
MOST READ
Suspect in grisly killing of missing woman in Bulacan arrested
Kim Atienza’s daughter flaunts bikini body in response to critics of her ‘revealing photos’
Bongbong Marcos’ first order: Abolish PACC, Office of Cabinet Secretary
Ex-Defense chief Lorenzana is the new BCDA chair
Don't miss out on the latest news and information.