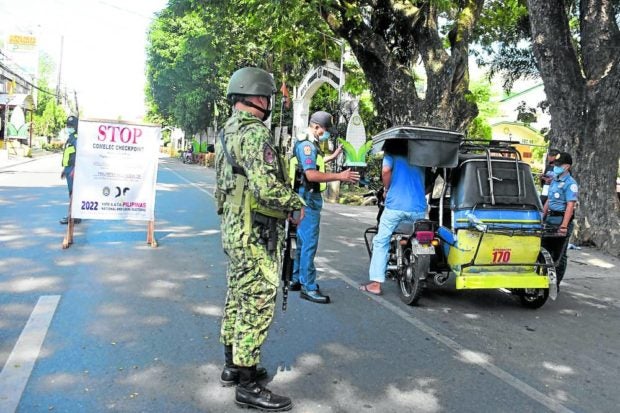 Police officers deployed during the May 9, 2022 elections.

MANILA, Philippines — Six people were killed while dozens more were wounded in around 16 separate poll-related incidents recorded mostly in the Bangsamoro Autonomous Region in Muslim Mindanao (BARMM) on Election Day.

But these were downplayed by the Philippine National Police which called the situation “more manageable” compared to the violence reported in previous polls.

“We have prevented attempts by some groups to commit atrocities, threaten voters to go out and cast their votes,” Año said.

The 16 validated election-related violence incidents were “very isolated,” mostly in Maguindanao and Lanao del Sur in Mindanao, and in Abra and Nueva Ecija provinces in Luzon, he added.

According to PNP spokesperson Col. Jean Fajardo, a total of 73 election-related incidents have been recorded since the poll period kicked off on Jan. 9.

Of the total, only 16 were confirmed to be election-related. Another 15 were suspected to be poll-related while the rest were found to have nothing to do with the elections.

Overall, Fajardo described this year’s polls as “relatively peaceful, except for isolated cases in Maguindanao.”

“We have not recorded any significant crime incidents that would somehow tell us that our elections are violent,” she said, adding that historically, Maguindanao was a “high-tension” area during election time.

Six municipalities of the province—Buluan, Datu Odin Sinsuat, Datu Piang, Mangudadatu, Pandag and Sultan Kudarat—were earlier placed under the control of Comelec, allowing it to order the deployment of additional police and military personnel if necessary.

Around 8:15 a.m. on Monday, unidentified men armed with assault rifles killed three members of a barangay peacekeeping action team (BPAT) who were helping guard a poll precinct in the town proper of Buluan, Maguindanao.

Based on a report from the 16th Military Intelligence Company, the gun attack happened at the back of Pilot Elementary School and was carried out by gunmen in two white vans.

In Malabang town, Lanao del Sur, another three persons were killed and two others hurt when supporters of local candidates traded shots inside a voting center.

The fighting that erupted shortly before noon also left Saidamen Macapodi and Alikman Sidic wounded. They are now recuperating in a hospital.

Six voters were injured when a rifle grenade landed beside the covered court of Datu Piang Elementary School in Barangay Buayan, Datu Piang town, at 11:15 a.m.

Earlier, several explosions were reported in Datu Unsay that left nine voters wounded. Another one occurred in Shariff Aguak but no one was injured.

The police also reported strafing incidents in two towns in Basilan province—Sumisip and on the island village of Bulo-bulo in Tabuan-Lasa—with no casualties.

The only exception to this were five polling precincts in Tuburan, Basilan, which started accommodating voters past 1 p.m. due to the late delivery of ballots and a “disagreement” among candidates.

The Department of Education (DepEd), meanwhile, reported various violent incidents, including the killing of a teacher who was about to serve in the elections, and provincial candidates forcibly closing school gates to prevent voters from entering and harassing teachers.

Although it was still unclear if the death of Mercy Miguel from Himamaylan National High School in Negros Occidental was related to the polls, the DepEd denounced his killing and called on provincial authorities to “deliver swift justice” to the victim.

According to Education Undersecretary Alain Pascua, the DepEd had received 33 reports of harassment against teachers as of 4:30 p.m. on Monday.

On a report that teachers were allegedly caught shading ballots in Barangay Makaguiling, Sultan Kudarat, despite protests from poll watchers, Marcelo Bragado Jr. of the DepEd’s election task force said they would refer the incident to the Comelec.

“We will be asking Comelec to look into that because even if they say that teachers [were involved], the election is still under Comelec,” he told the Inquirer, saying that they did not want the DepEd personnel to be used for any dirty tactic.

The Alliance of Concerned Teachers expressed alarm over election-related violence “that put both the teachers’ and voters’ safety in peril, as well as jeopardize the sanctity of the ballots.”

It cited reports about a strafing incident and “heavy firing” in Basilan, as well as cases of armed men barging into a polling center in Lanao del Sur and destroying vote-counting machines and ballots.

In Tuao town, Cagayan province, a hand grenade lobbed at a group of village workers in Barangay Lallayug, on the eve of May 9 wounded three persons, the police said.

Capt. Isabelita Gano, Cagayan police spokesperson, said that village councilor Hermogenes Gannaban and watchmen Honorato Tangaro and Domingo Sanchez were manning an outpost in front of the barangay hall when one of two men on a motorcycle lobbed a grenade at them before fleeing.

The victims sustained shrapnel wounds and were taken to Tuao District Hospital.

A follow-up investigation identified the motorcycle driver as Paolo Doctor of Bagumbayan, also of Tuao, while his pillion rider, who lobbed the grenade, remains unidentified.

Comelec: Hot pursuit on vs gunmen in attack near Maguindanao polling center

3 killed, one hurt in gun attack near polling precinct in Maguindanao town