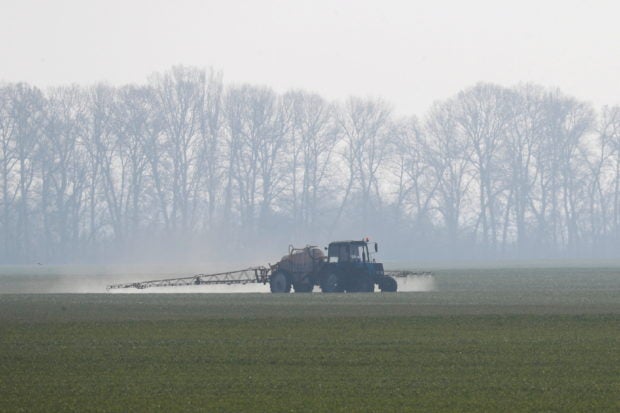 FILE PHOTO: An agricultural worker drives a tractor spreading fertilizers to a field of winter wheat near the village of Husachivka in Kiev region, Ukraine April 17, 2020. REUTERS/Valentyn Ogirenko/File Photo

KYIV — Ukraine has sown about 7 million hectares of spring crops so far this year, or 25-30% less than in the corresponding period of 2021, and exported 1.090 million tons of grain in April, Agriculture Minister Mykola Solskyi said Monday.

He underlined the importance of exports of Ukrainian grain via Romania while Russia is blockading Ukrainian ports, but said those exports could be complicated in two months by exports of the new wheat crop in Romania and Bulgaria.

“The sowing campaign is going on actively despite the difficulties associated primarily with logistics,” Solskyi told a news conference.

He said the sowing this year was not of the same quality as last year and that the sowing area for corn was smaller.

Ukraine had been the world’s fourth-largest exporter of maize (corn) in the 2020/21 season and the number six wheat exporter, according to International Grains Council data.

Nearly 25 million tons of grains are stuck in Ukraine and unable to leave the country due to infrastructure challenges and blocked Black Sea ports, a U.N. food agency official said on Friday.

Ukrainian agriculture officials say the exportable surplus is around 12 million tons and analysts have said Ukraine’s currently large stocks will leave no room for storing the new harvest when it comes.

U.N. Secretary-General Antonio Guterres has said that the problem of global food security could not be solved without restoring Ukrainian agricultural production to the world market.

Repeating allegations that Russia has been stealing grain from Ukraine during the war, Solskyi said Ukraine regarded any ships carrying grain via the port of Sevastopol in the Crimea region to be stolen.

“Work is underway so that this stolen grain can be quickly seized,” he said, without giving details.

Russia, which annexed Crimea from Ukraine in 2014, has denied stealing Ukrainian grain.

Solskyi welcomed the “interest and understanding” shown by Romania over exports of Ukrainian grain and said Baltic ports looked the most attractive alternative.