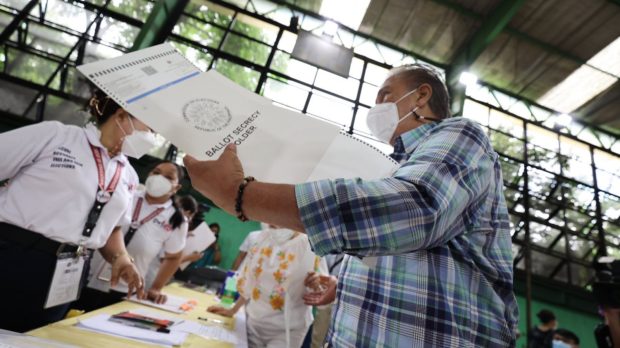 Sotto arrived at the White Plains Covered Court in Quezon City at around 9:30 a.m.

Now seeking the vice presidential post, Sotto’s first foray in politics was when he won as vice mayor of Quezon City in 1988 and served as such until 1992.

Fast forward to 2022, Sotto and his running mate presidential candidate Senator Panfilo Lacson were the first to announce their intention to run for the two highest positions in the country.

READ: Lacson to run for president in 2022 with Sotto as his vice president

In urging voters to choose them, Sotto cited his and Lacson’s decades worth of experience in public service, with their campaign anchored on ability, honesty, and courage — “kakayahan, katapatan, at katapangan.”

“Put us in the executive department so we can properly implement the laws we crafted,” he’d often say to voters during their campaign activities.

During his final speech before the campaign ended last week, Sotto also reiterated the need for a new kind of politics—one that is free from corruption.

“Gusto namin ng bagong pulitika. Ang kailangan natin sa Pilipinas, walang korapsyon, ang pera ng gobyerno dapat ibigay sa taumbayan [We want a new kind of politics. What we need in the Philippines is no corruption, the funds of the government should be given to the people],” he had said.

In last rally, Lacson thanks Sotto for shunning ‘temptations’ to drop tandem