Up to last day of campaign, Bongbong Marcos sticks to unity message 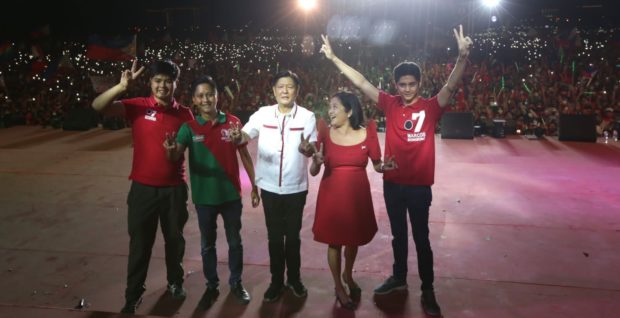 PARAÑAQUE CITY, Philippines — In Philippine Arena back on February 8, the first day of the campaign, presidential candidate Ferdinand “Bongbong” Marcos Jr. made clear his battle cry for the 2022 national elections: For Filipinos to unite.

Three months later and two days before the elections, Marcos Jr. made his one last appeal to the public, sticking to his unity strategy while also thanking those who have joined him in what he now calls a “movement”.

Right before delivering his final speech before his supporters in Paranaque City on Saturday, Marcos Jr. carried a Philippine flag—a similar scene to when he launched his campaign at the Philippine Arena 90 days prior.

From small meetings with different sectors to grand rallies attended by thousands of his supporters, Marcos Jr.’s campaign has circled around his call for unity.

Marcos Jr. stressed that unity is the first step for the country to recover from the coronavirus pandemic.

Initially, Marcos has dubbed his message as a “call for unity”, but later on, the presidential bet said it has transformed into a “movement”, claiming that more Filipinos are joining the call to unite as the campaign season progressed.

In the past, he has mentioned his push to strengthen the agriculture and tourism sectors as well as the improving infrastructure in the country.

Organizers of the Marcos-Duterte miting de avance estimate that over one million supporters attended the Paranaque event.

On election day, Marcos Jr. will vote in Ilocos Norte.