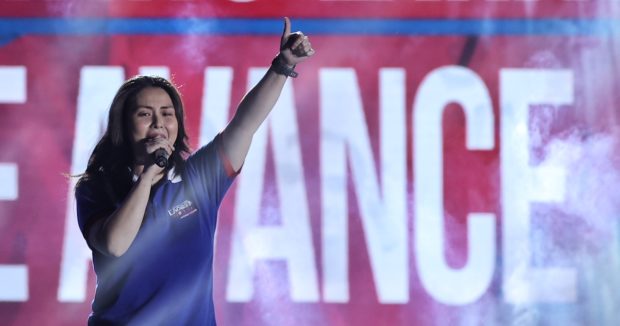 CARMONA, Cavite — In what could be considered as the most performance- and celebrity-packed rally of the Lacson-Sotto tandem, famous supporters made a final push to gain votes for the two senators, with some taking a dig at other candidates who resort to dancing to woo voters.

Sotto’s brother, Vic, graced the latter part of the program and gained the most cheers from the crowd. He reiterated his support for the Senate president and Lacson.

Following several musical performances, the crowd erupted into cheers as “Eat Bulaga” comedians Jose Manalo and Wally Bayola were introduced to the stage, where they performed two songs.

Both were also at the Lacson-Sotto tandem’s kick-off proclamation rally in Imus, Cavite last February.

“Wag tayong magpadala sa social media [Don’t be swayed with what you see on social media],” he added.

Actor Kier Legaspi likewise expressed support for the tandem, saying voters should base their choice on competence, intelligence and track record.

Kakai Bautista, introduced as the “Dental Diva,” was also among artists who hyped up the crowd during the miting de avance.

She declared her support for Sotto, citing his and family’s “sincere” nature, which she said is “very rare” to find in the showbiz industry.

“Ang hahanapin po natin na iluluklok sa posisyon ay yung mga totoong taong mabait kahit walang kamera [What we should look for in a candidate to elect is if they’re really kind even without a camera],” she added.

Lacson’s daughter-in-law, Iwa Moto, meanwhile told voters why the senator, a former top cop, is not the most jovial of people.

“Hindi siya malambing, don’t get me wrong, nakakatakot siya. Strikto siya. Pero alam niyo kung bakit kasi ang sabi niya sa amin? ‘Bakit ako magiging palatawa, at bakit ako sasayaw e ang hirap ng problema ng bansa?’ [He’s not tender, don’t get me wrong, he’s scary. He’s strict. But you know what he said to us? ‘Why would I be prone to laughing? And why would I dance when the country is facing tough problems]” Moto said.

Lacson and Sotto have done away with dancing or singing to woo voters, preferring to conduct town hall meetings instead.

The Lacson-Sotto tandem are set to visit Rizal, Laguna, Batangas and Cavite in a caravan on May 7, the last day of the campaign before Filipinos cast their votes on May 9.