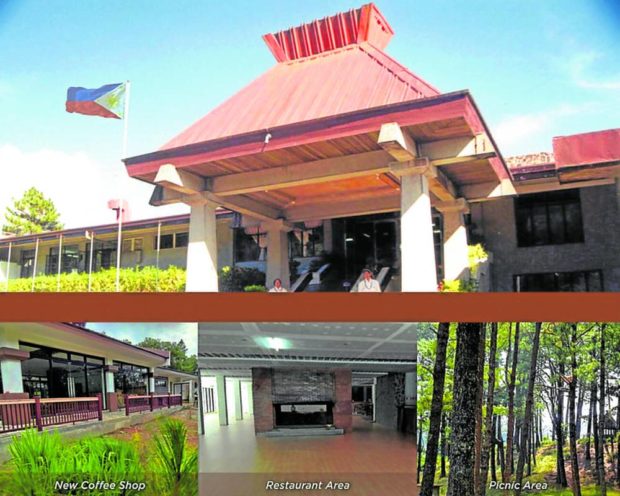 Also called Mount Data Lodge, the 24-room facility will “play a new role in tourism development [by] assisting in the recovery of the tourism industry,” said Jovita Ganongan, director of the Department of Tourism (DOT) in the Cordillera, who attended the launch at Bauko town.

The lodge, which was rehabilitated by the Tourism Infrastructure and Enterprise Zone Authority (Tieza), was put up during the term of the late President Diosdado Macapagal, who served from 1961 to 1965, “with the goal of promoting tourism in Mountain Province and the central Cordillera region,” Ganongan said.

The Tieza website describes the old hotel, which is located along Halsema Highway, as a rest stop for motorists on their way to some of the Cordillera’s top tourist attractions—the hanging coffins and caves of Sagada town, also in Mountain Province, as well as the Ifugao rice terraces.

The lodge is near the 5,512-hectare Mount Data National Park, one of the first watersheds to be protected by the American colonial government.

It has been refurbished and now features comfortable rooms, a cafe and bar that serves Cordillera coffee, and convention facilities, so it would serve as a tourist destination, given its role in the formation of the Cordillera Administrative Region.

The 1986 “sipat” (cessation of hostilities), which was formalized at the hotel, was followed by the issuance of Executive Order No. 220, which formed the region.

“As the tourism industry recovers and moves forward, the reopening of Mount Data will boost tourism and contribute to the gradual and safe revival of the Cordilleras’ local tourism industry,” Ganongan said.

Many tourism-oriented towns in the region have welcomed back guests, although most travelers still head to Baguio City, she said.

The region’s tourism-related businesses suffered from community quarantines and lockdowns, when visitor numbers plunged from 2.025 million tourists in 2019 to 335,028 when the pandemic broke out in 2020, and further down to 143,222 in 2021 when businesses slowly resumed operations, according to DOT records.

But Baguio has experienced prepandemic visitor numbers in March and April this year, with 20,000 to 50,000 daily arrivals.

“As it has been demonstrated, comfortable hotels and lodging facilities play a critical role in increasing the popularity of any tourist destination,” Ganongan said.

She added: “If tourists who are far from home are able to enjoy world-class facilities and services that will make them more satisfied with their visit and make their stay memorable, they are likely to become attached to the location.”

Mount Data Lodge would also be part of a “farm tourism circuit connecting Benguet with Mountain Province, where tourists could visit vegetable and flower farms in Atok and Buguias in Benguet and proceed to the vegetable farms in Tadian and Bauko in Mountain Province,” she said.

Bird watchers could stay there while visiting Sabangan in Mountain Province, “which will be connected to similar bird-watching sites in Alfonso Lista town in Ifugao all the way to Apayao province,” Ganongan said.