INC endorsements: Do they matter? 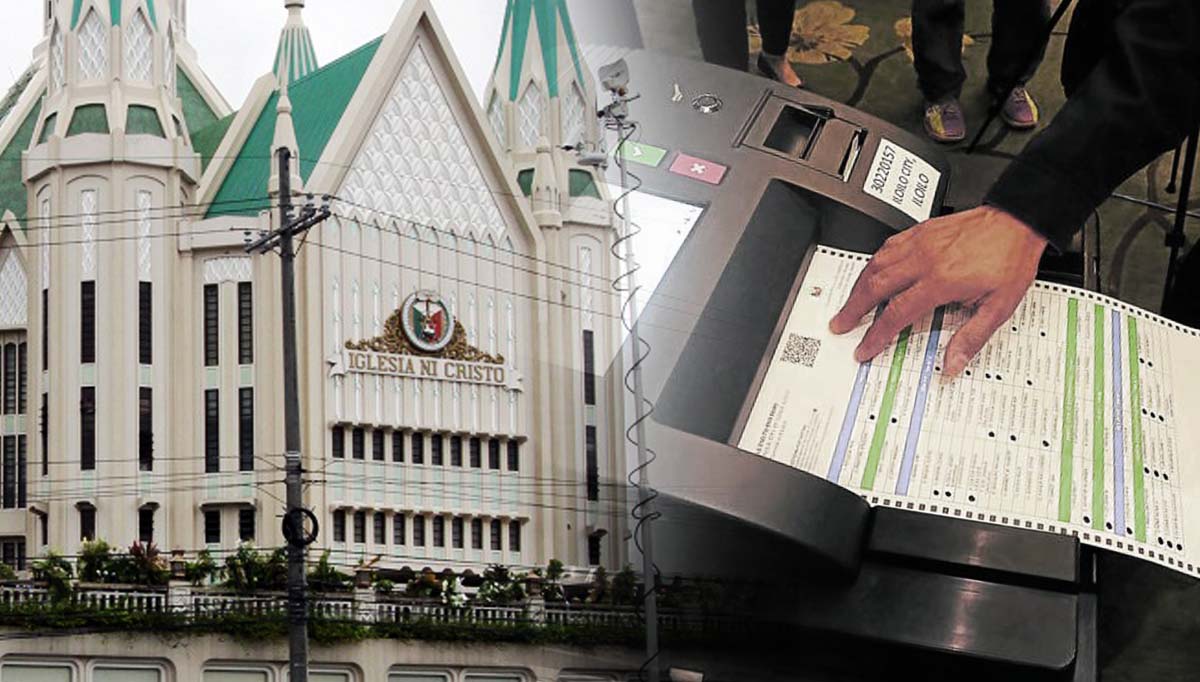 MANILA, Philippines—With over 2.6 million members in the Philippines as of the last national census in 2015, it is no surprise that some candidates try to woo Iglesia ni Cristo (INC) for support every election period.

Founded in 1914 by Felix Manalo, INC is a religious movement, whose members are believed to obey long-held bloc voting practices inside their church and vote for candidates endorsed by their leaders.

With millions of members nationwide, endorsement from INC has always been believed as influential, especially for candidates running for top government positions—president, vice president, and senators. 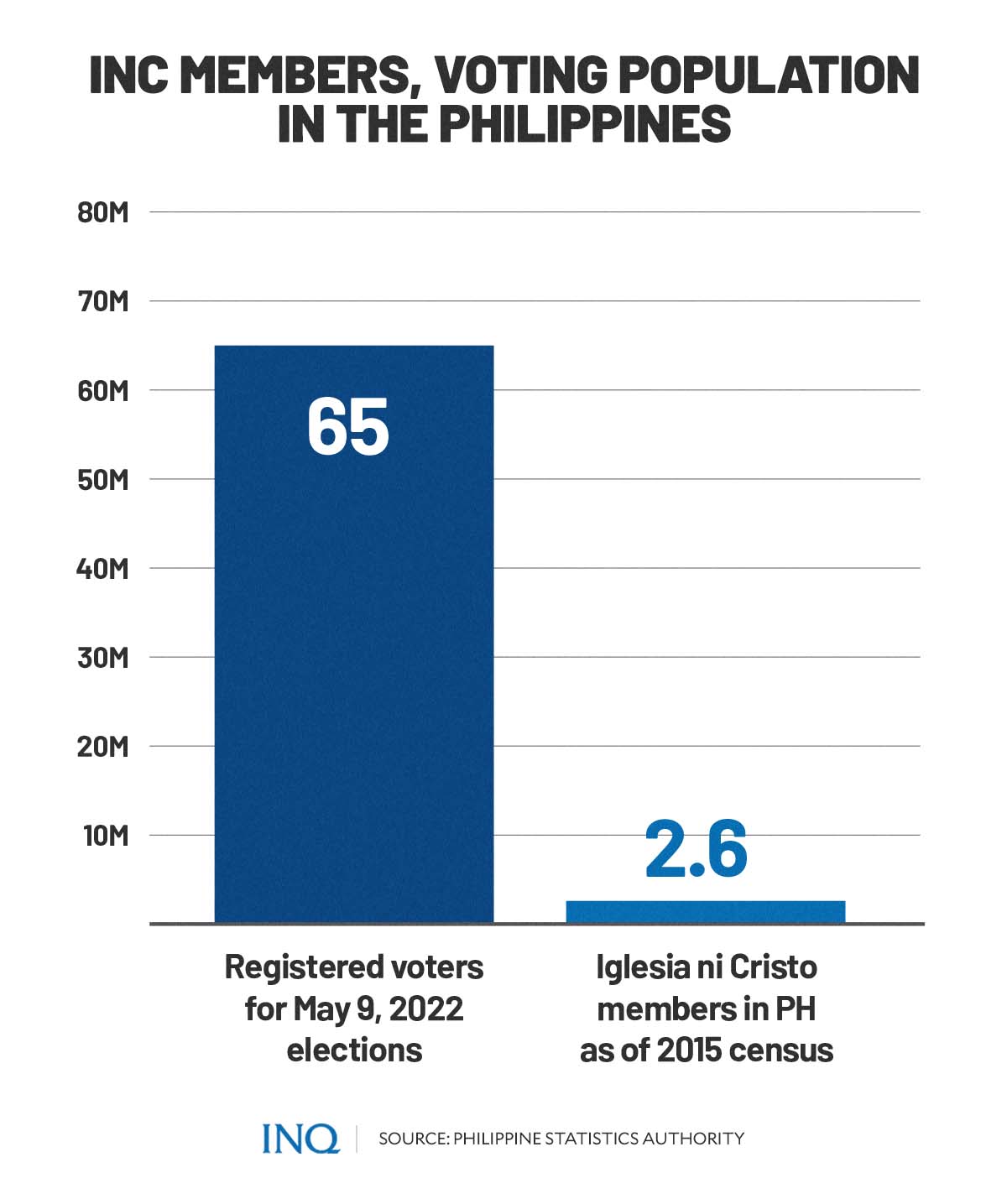 What makes the endorsement more enticing, especially for presidential and vice-presidential candidates, was that some candidates previously endorsed by INC attribute their victories to the religious group.

The INC endorsement, however, doesn’t have a perfect batting average. Many other candidates endorsed by the religious group lost while others won but were ousted later.

This week, just a few days ahead of the May 9 general elections, INC has announced its candidates of choice for president, vice president, and senators.

The announcement was made during the primetime evening news program of INC’s broadcaster NET25.

“[T]he unity of Iglesia is recognized by its members as one of the teachings of the Bible that should be followed,” the television anchor said in Filipino, announcing the endorsement.

“The decision of the Iglesia leadership is respected by its members,” he said. “The politicians, meanwhile, recognize the help that the Iglesia unity may offer to their candidacy on election day.”

Speculations that the INC would endorse the Marcos-Duterte tandem began circulating as early as February after the team held their proclamation rally at the Philippine Arena in Bulacan, a sprawling complex owned by the religious group.

The establishment, known as the largest indoor arena in the world, is owned by INC.

At that time, however, Marcos’ spokesperson lawyer Vic Rodriguez quashed the rumors, explaining that the Philippine Arena was just “a venue.”

“You’re reading too much between the lines. We have not said anything close to that. This is only a venue,” Rodriguez told reporters.

“We chose this because this is the biggest and can accommodate thousands of our supporters,” he went on.

“This is the biggest but if there are other bigger venues, we would probably be there,” added Rodriguez.

INC also announced that it was endorsing 12 senatorial candidates, most of whom belonged to the senatorial ticket of the Marcos-Duterte tandem.

The candidates endorsed were:

On May 3, the Lakas-Christian Muslim Democrats (CMD) party expressed its gratitude to INC for endorsing or supporting the presidential and vice-presidential bids of the Marcos-Duterte tandem.

“In (sic) behalf of Lakas-CMD, under which Mayor Sara is running for vice president, let me express our sincerest gratitude to the INC and its millions of members for supporting our candidates. There are no words to describe our appreciation for their decision, and we cannot thank them enough,” said Rep. Martin Romualdez (first district, Leyte), Lakas-CMD president and House majority leader.

“The INC is one of the biggest religious groups in the country. It is known to vote as a bloc. Its announcement today, together with the expressions of support for the BBM-Sara tandem of other religious and sectoral organizations and local officials, seals what we expect to be the landslide victory on Monday of our candidates,” said Romualdez, a cousin of Bongbong Marcos.

“With broad support from our people, including INC members, it will be easier for our candidates, should they win the vote, to deliver on their promise of uniting the nation behind its new leaders and the difficult challenges it will face ahead.”

In a statement, Marcos’ spokesperson also thanked the religious group.

Amid the celebration, however, some were quick to point out online the stark difference between the Marcos’ camp statement following endorsement from INC and its statement last March directed at the Catholic clergy.

In a statement two months ago, Rodriguez said that while Marcos is calling for unity, his camp is “saddened by the men and women of the Catholic clergy who are doing the exact opposite and have abused the pulpit, allowing it to become a platform for hateful and negative campaigning.”

“As men and women of the cloth, they should be more circumspect, refrain from openly meddling with politics and stop making reckless imputation or statement that only serves as a spiritual, moral, social and cultural poison,” Rodriguez said.

Rodriguez, however, did not give an exact instance where the Catholic Church engaged in a negative campaign and meddled with politics as an institution.

According to pollster Mahar Mangahas, the sect usually announces its “anointed candidates” around a week before Election Day, “when the rankings of the candidates in the polls have stabilized.”

“It endorses candidates not on the basis of any moral or political standard but on who the public opinion polls show to be the most likely winners,” Mangahas said in an opinion piece published on INQUIRER.net on January 29.

“That has been shown to be true in past electoral exercises. In 2004, it delayed its endorsement of Gloria Arroyo until the week before election day when she emerged as being ahead of Fernando Poe Jr., the rumored preference of the sect, in the polls,” he said.

“In 2010, it switched from Sen. Manuel Villar to Sen. Noynoy Aquino five days before election day, when Aquino had dislodged Villar from being the topnotcher in the polls,” he added.

The endorsement this year was announced days after Pulse Asia released controversial results of its survey conducted from April 16 to 21. In that survey, Marcos remains at the top spot among presidential candidates after 56 percent of respondents said they will vote for him.

Marcos’ running mate, Duterte, was also leading among the vice-presidential candidates in the same survey with 55 percent preference rate, nearly identical to that of Bongbong Marcos.

Meanwhile, out of the 12 senatorial candidates endorsed by INC, 10 were in the same survey’s top 12 candidates which Pulse said had statistical chances of winning.

From the INC’s senatorial list, only Joel Villanueva and Guillermo Eleazar did not make it to the latest Pulse Asia’s top 12. Villanueva, running for reelection as senator, was ranked 13-14 while Eleazar, former national police chief, was at rank 16-20.

The senatorial candidate on top of the preference list in Pulse’s survey, broadcast personality Raffy Tulfo, is not endorsed by INC. Risa Hontiveros—ranked eighth to 12th in the survey—was also not on the INC list.

In 2016, the sect endorsed then-Davao City Mayor Rodrigo Duterte for president and Bongbong Marcos for vice president. Duterte won but Bongbong Marcos lost. The INC endorsement came after SWS and Pulse released the results of their final survey for the 2016 elections. 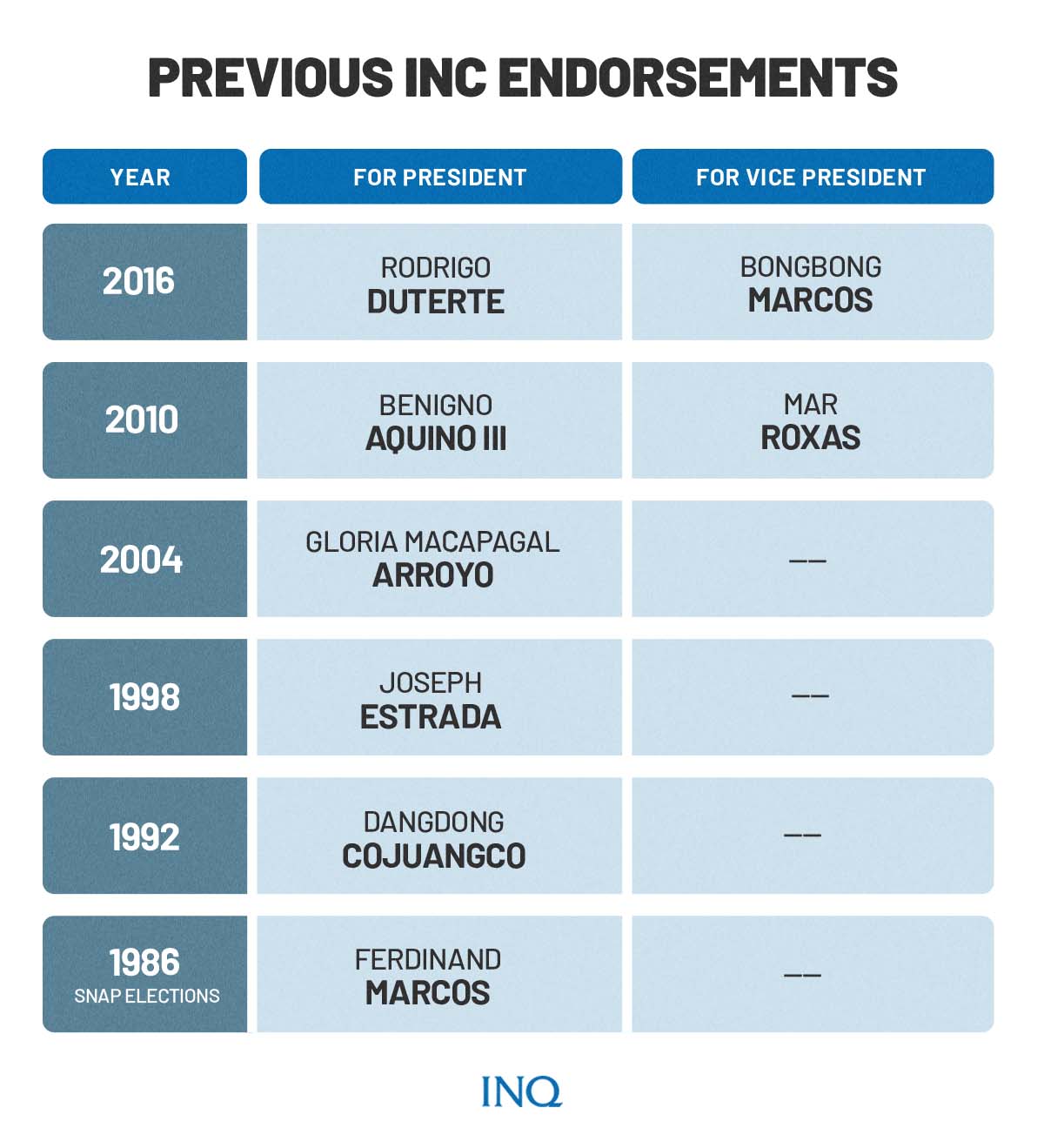 Those survey results showed Duterte in the lead with 33 percent preference rate.

Bongbong Marcos led in the survey for presidential candidates with a preference rate of 42 percent in the SWS survey. In the Pulse Asia survey, however, he was only second to Robredo with a 28 percent preference rate.

In 2010, INC endorsed the late Benigno “Ninoy” Aquino III, who ranked first in both SWS and Pulse Asia’s final election survey for the 2016 polls. Gloria Macapagal Arroyo, who was backed by the sect in 2004, was also the leading presidential candidate in the last surveys by SWS and Pulse Asia for the 2004 elections.

Meanwhile, in an interview last year, JV Ejercito explained why he failed to get support from INC when he ran for senator in 2019. He said that the survey result “is a big factor” in securing a spot on the sect’s coveted endorsement list.

“I was not the one supported by Iglesia [ni Cristo]. Probably because of my low rankings [in surveys] prior to the last [survey before elections]. But had I been the one supported, I would’ve ended up at number 8,” said Ejercito in an interview over ANC’s “Headstart” on October 5, 2021.

“It’s a big factor,” he continued.

“I’ve been supported by Iglesia ever since I started my political career. It was only last election that they did not see us worthy. I’m hoping that this time around…They said it was unfortunate that I lagged behind in previous surveys. I only broke in the top 12 in the last survey. Probably at the time they already made the decision.”

Citing Ejercito’s statement, Mangahas said the religious group chooses which candidates to endorse depending on who will be included in the “winning circle” based on survey results.

“That is how the INC chooses the candidates it asks its faithful to vote for. It endorses only those candidates that the polls show to be likely winners.”

“That practice has given the less discerning traditional politicians the impression that INC’s bloc vote is the deciding factor in the success of a candidate’s quest for an elective post,” said Mangahas.

Based on the 2015 national census by the Philippine Statistics Authority (PSA), there were over 2.6 million INC members in the country.

In 2010, the SWS/TV5 exit poll showed that 4.23 percent of valid votes for president were cast by people who declared their religion as INC. Figures from the Commission on Elections (Comelec) showed that 36.14 million votes were cast for president during the sam election period, excluding stray votes for valid candidates. 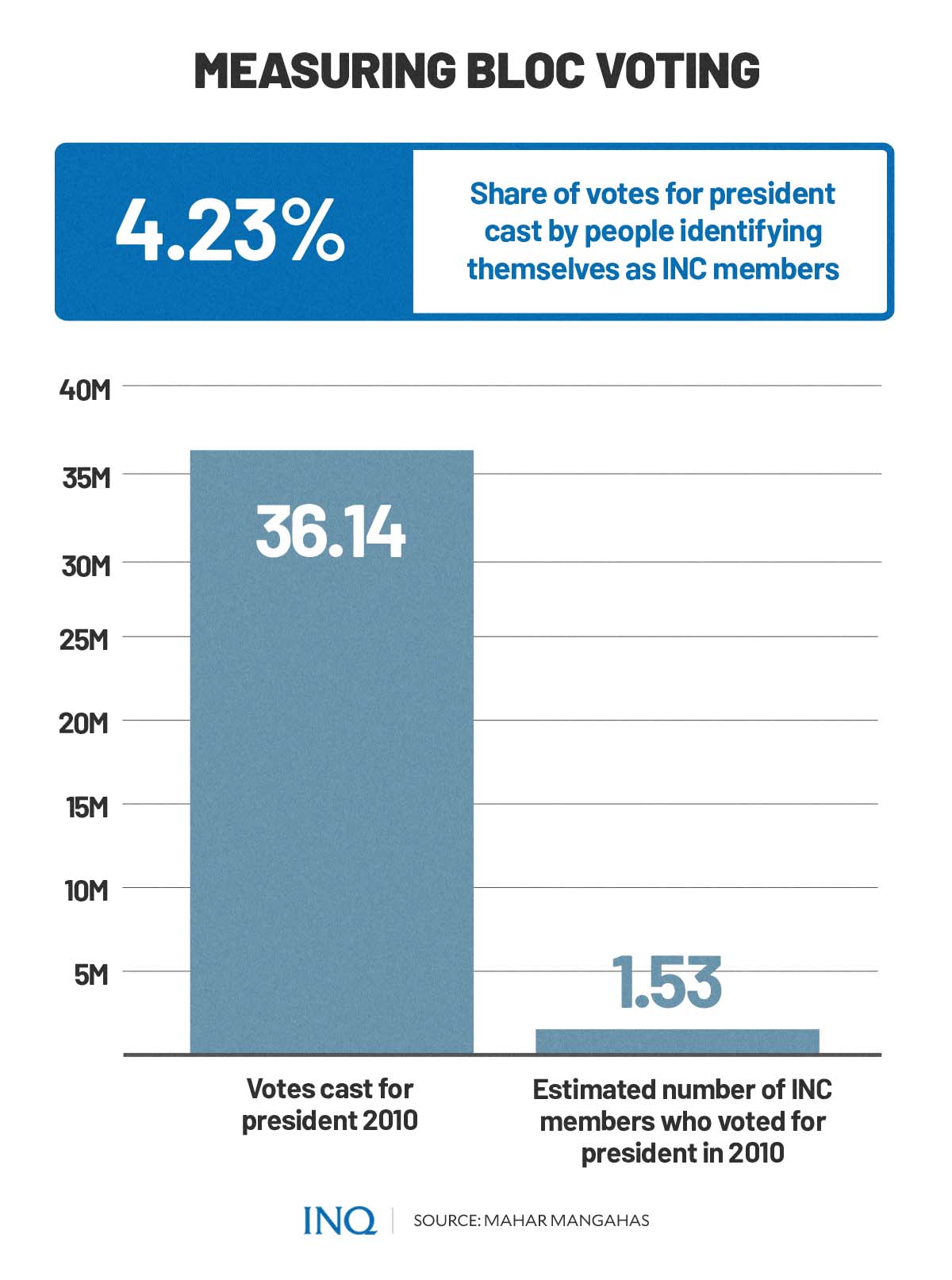 With these data, Mahar Mangahas estimated that there were 1.53 million votes from INC members for president in 2010.

“Multiplying the two gives an estimated 1.51 million votes of INCs for vice president in 2010, ” Mangahas said.

READ: SWS statistics about the INC

Aside from looking at figures, how did the endorsed candidates fare during the previous elections?

In 2016, 11 out of 14 total endorsed candidates for president, vice president, and Senate won in 2016, while it was difficult to measure how much weight the INC endorsement had in the results.

In 2010, 12 out of 14 total INC-endorsed candidates for president, VP and senator won in the 2010 elections, although it was difficult to measure how big a role the INC endorsement played in the results.

“The Iglesia Ni Cristo’s endorsement as the deciding factor in a candidate’s success is a myth,” Mangahas wrote in his opinion piece.

Endorsements: ‘Tell me who your friends are…’