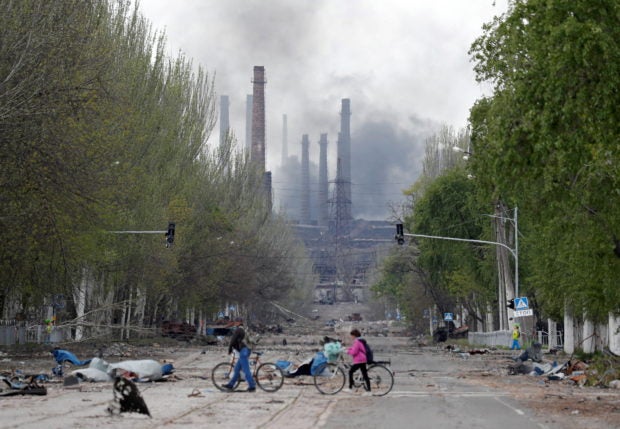 People walk their bikes across the street as smoke rises above a plant of Azovstal Iron and Steel Works during Ukraine-Russia conflict in the southern port city of Mariupol, Ukraine May 2, 2022. REUTERS FILE PHOTO

The mayor of the destroyed Ukrainian city of Mariupol says contact has been lost with Ukrainian forces holed up in the Azovstal steel plant amid “heavy fighting” with Russian troops.

City officials have no way of knowing “what’s going on, whether they are safe or not”, Vadym Boichenko tells Ukrainian television.

The Kremlin denied Russia was storming the plant after Ukraine accused Moscow of launching a “powerful” assault on the industrial zone, the last redoubt of Ukrainian forces.

The bodies of another 20 civilians were found in the past 24 hours in the Kyiv region, police say, raising the total number found there so far to 1,235.

Kyiv regional police chief Andriy Nebytov says the latest discoveries were found in Borodianka and the surrounding villages, some 25 kilometers (15 miles) from Bucha, the town near Kyiv now synonymous with allegations of Russian war crimes.

US President Joe Biden says he is “open” to imposing more sanctions on Russia and will discuss measures with allies from the G7 in the next few days.

Ukraine says EU countries blocking an embargo on imports of Russian oil would be complicit in crimes committed by Russian troops on Ukrainian territory by funding Moscow’s military.

“If there is any country in Europe who will continue to oppose the embargo on Russian oil, there will be good reason to say, this country is complicit in the crimes committed by Russia in the territory of Ukraine,” Ukraine Foreign Minister Dmytro Kuleba says in a briefing on social media.

Ukraine accuses Russia of planning to hold a military parade in the destroyed city of Mariupol on May 9 to celebrate victory over the Nazis in World War II.

Kyiv says an official from Russia’s presidential administration has arrived in the strategic southern port city, to oversee plans for the Victory Day parade.

“We will phase out Russian supply of crude oil within six months and refined products by the end of the year,” she tells the European Parliament.

Russian forces continue to pound sites to the east of the country, Ukraine’s general staff says, as Moscow seeks to establish “full control” of the regions of Lugansk and Donetsk, and to maintain a land corridor to occupied Crimea.

In Lugansk, governor Sergiy Gaiday says two people have died in the last 24 hours, and “the whole region is under fire completely, there is no safe place”.

Further evacuations from Mariupol are expected Wednesday, a day after 156 people arrived in the Ukrainian-held city of Zaporizhzhia.

Belarus, a Moscow ally that shares a border with Ukraine, launches “surprise” military manoeuvres, to test the reactive capacity of its army, its defence ministry says.

Belarus military units were testing their capacity to “go on the alert, move to predetermined zones and undertake combat training,” it says.