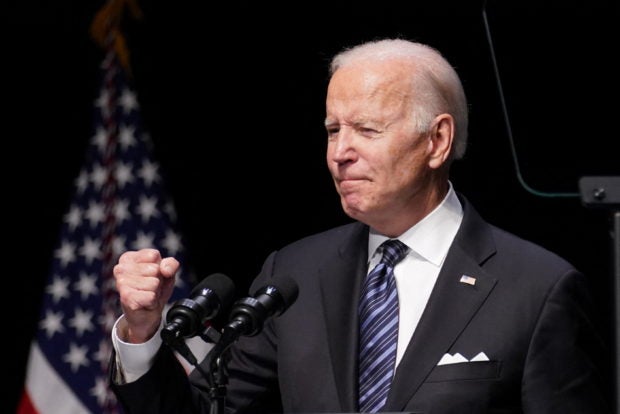 WASHINGTON—Only the second Roman Catholic to be elected US president, Joe Biden now finds himself thrust into the role of championing abortion rights as the Democrats’ potential best path to preventing heavy defeat in upcoming midterm elections.

Biden, who attends Mass almost every weekend and talks often of the importance of his religious faith, has long walked a somewhat delicate line between his party and a church that fiercely opposes abortion.

But with a leaked draft ruling showing that the Supreme Court is set to overturn the national right to abortion enshrined in the 1973 Roe v. Wade ruling, Biden’s presidency will now be in part defined by this most divisive of issues.

“I believe that a woman’s right to choose is fundamental… and basic fairness and the stability of our law demand that it not be overturned,” Biden said in a statement cementing abortion as a pillar in the upcoming election.

If the court hands power over abortion to individual states, then “it will fall on voters” to decide what happens next.

With a career stretching back four decades in the Senate, eight years as vice president under Barack Obama and now into his second year as president, it’s not surprising that Biden’s position on abortion has fluctuated.

A fair summary would seem to be that while lukewarm himself, he has become fully committed to the party line endorsing the universal right to abortion across the country — the basic freedom set to end if the draft court ruling is adopted.

In his 2007 book, “Promises to Keep,” Biden wrote that he was “personally opposed” to abortion but didn’t have the “right to impose” his position on society.

Since becoming president, he has backed pro-abortion rights measures, such as immediately rescinding a ban on US government funding to health providers around the world that perform or advise on abortions.

But he has also tried keeping symbolic distance, for example steering mostly clear of the word “abortion” itself — a least until Tuesday, when he was discussing the political bombshell of the draft Supreme Court ruling.

“It’s the first time, as far as I know, that a statement from him uses the word ‘abortion,’ which is important to destigmatize,” said Morgan Hopkins at All Above All, a campaign group backing access to abortion.

Biden’s approval ratings are stuck in the low 40 percent range ahead of the November midterms. Most polls show the Democrats being stripped of power in the House of Representatives as well as the Senate, where even now they have only one extra vote.

A battering in the midterms raises the prospect of Biden’s second two years in office becoming an ugly grind, with a Republican-controlled Congress making good on its leaders’ threats to jam up the works with investigations and obstruction.

The White House argues that Biden has done a good job steering the United States out of the Covid pandemic and now taking a strong lead on the Western response to Russia’s invasion of Ukraine.

But with inflation at a 40-year high and former president Donald Trump’s hardliners continuing to push conspiracy theories discrediting US democracy, the mood is sour and Democrats can appear rudderless.

The looming demise of Roe v. Wade may offer a lifeline.

“The leaked opinion could galvanize support for Democratic nominees and perhaps enable Democrats to retain their thin majorities in the Senate and the House,” said Carl Tobias, professor at University of Richmond School of Law.

Tobias noted that the shocking leak of an opinion from the usually leak-proof court illustrates the volatility of the moment and “could exacerbate the political fallout by galvanizing opposition.”

Former Obama advisor Dan Pfieffer said it was “way too early” to know if an abortion rallying cry will spur Democrats to flip the midterms odds.

But the fight is on, he said.

“There was a dumb circular debate among Democrats about whether to engage in the ‘culture war’ attacks from Republicans. That debate ended with the leak of this opinion.”