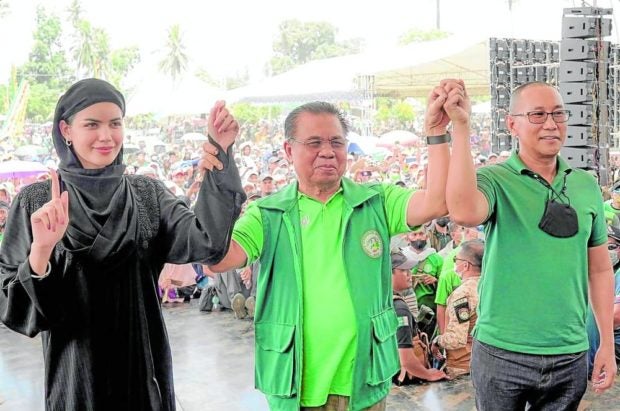 KORONADAL CITY, South Cotabato, Philippines — Miss Asia Pacific 2018 Sharifa Akeel-Mangudadatu said she got the best gift for Eid al-Fitr when the Commission on Elections (Comelec) en banc decided to cancel the certificate of candidacy (COC) of her rival for the governor’s seat in Sultan Kudarat province.

The former beauty queen and wife of Maguindanao Rep. Esmael “Toto” Mangudadatu is running for governor of Sultan Kudarat against Datu Pax Ali Mangudadatu, the mayor of Datu Abdullah Sangki in Maguindanao.

She earlier questioned the residency status of her rival, which she said fell short of the required one year in the province where he was running.

In its promulgation on Monday, the Comelec en banc denied Datu Pax Ali’s motion for reconsideration and affirmed the Jan. 18 resolution of the First Division.“The best gift [that I received] this Eid! Alhamdulillah,” Akeel-Mangudadatu wrote as she posted on her Facebook page the Comelec en banc’s eight-page decision.

Her rival’s camp, however, said it was still too early to celebrate.

Cyrus Torreña, Datu Pax Ali’s lawyer, said they were saddened by the decision of the Comelec en banc but they would seek a temporary restraining order from the court. “The fight is still on,” he said in a radio interview.

Torreña said the Comelec order was not final and they could still appeal before the Supreme Court.

He urged supporters of Datu Pax Ali Mangudadatu to still vote for him in the May 9 polls, reiterating that the high tribunal would have the final say.

Datu Pax Ali’s father, incumbent Sultan Kudarat Gov. Suharto “Teng” Mangudadatu, is a cousin of Representative Mangudadatu, but the family has been locked in an intense political feud for years.

“Datu Pax Ali’s one-year residency status in Sultan Kudarat province as a requisite for a candidate was not met. He fell short by eight days,” he said in a telephone interview.

Their lawyers, he said, received an electronic copy of the decision Monday afternoon.

Unless Datu Pax Ali could get a temporary restraining order from the Supreme Court, Representative Mangudadatu said his wife “would be unopposed in the May 9 polls.”

—WITH A REPORT FROM EDWIN O. FERNANDEZ