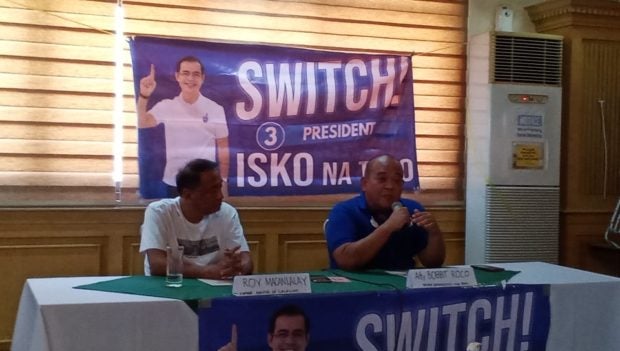 CALASIAO, Pangasinan — The campaign group of presidential candidate and incumbent Manila Mayor Francisco “Isko Moreno” Domagoso on Monday said they remain hopeful about his chances in the May 9 elections despite lagging behind the frontrunners in the latest Pulse Asia survey.

Robbie Roco, vice president of Aksyon Demokratiko, Moreno’s party, said they have seen this scenario before.

According to Roco, a week before the 2019 elections for the Manila mayoralty race, Moreno was a “poor third” in surveys, which were dominated by former President Joseph Estrada.

“(Estrada) was leading at 51 percent. Isko was a poor third,” Roco said at a press briefing.

Former Manila Mayor Alfredo Lim ranked second in the survey that year. Roco did not mention the pooling body or the group that commissioned the survey.

Roco, son of late Senator and Aksyon Demokratiko founder Raul Roco, expressed confidence that Moreno could make it to the top, adding that their internal survey shows different results from the “commercial” ones.

Based on the latest Pulse Asia survey held from April 16-21, Moreno dropped to fourth place with four percent. He was overtaken by Senator Manny Pacquiao, who obtained seven percent.

“We are running under different survey results with broader respondents,” Roco said.

The Moreno campaign group is also banking on the “silent majority,” which it claims would carry him to victory in elections next week.

Roco cited the “silent majority” in the US who came out to vote for then-presidential candidate Joe Biden “because they did not like Trump anymore.”

“In the same manner, the silent majority in the Philippines will come out when needed,” Roco said. INQ