newsinfo / Headlines
Headlines
STILL AT LOW RISK OF ANOTHER OUTBREAK 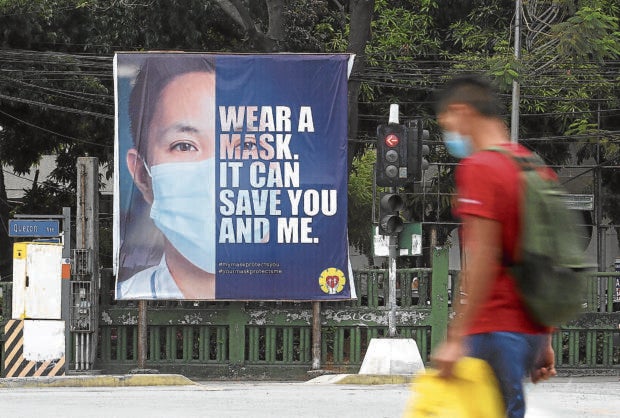 MANILA, Philippines — Metro Manila saw a slight increase in new COVID-19 cases over the past week, although it remained at low risk of another outbreak as of April 30.

The independent monitor group OCTA Research said the seven-day average in new cases in Metro Manila rose by 7 percent to 85 daily infections for the period April 24 to 30, from the previous week’s 79 cases.

However, OCTA Research fellow Guido David said on Sunday the rate of infection and hospital admissions have remained at low levels.

The reproduction number, which indicates how many people can be potentially infected by a COVID-19-positive person, increased over the same period from 0.66 to 0.79.

A reproduction number of less than 1 indicates a downward trend in reported cases.

An average of 11,544 laboratory COVID-19 tests are conducted daily in Metro Manila with the latest positivity rate of 1.4 percent for those who were tested for the virus.

The ideal positivity rate according to the World Health Organization (WHO) is 5 percent and below.

The country’s COVID-19 death toll rose to 60,341 with 36 more deaths confirmed by the Department of Health (DOH) that day.

The number of active cases, or people who are still infected with the virus, has gone down to 7,165, the lowest since May 1, 2020, or about two months into the pandemic.

With the spread of new Omicron subvariants, however, COVID-19 cases in the Philippines could reach 5,000 to 10,000 a day, according to OCTA Research.

“We are seeing a possible increase in cases. Actually, it could happen anytime, we can’t say when it will reach us. The reason is that we are seeing a surge in South Africa and in India, and these are countries that have similar characteristics to the Philippines,” David said at the Laging Handa briefing last week.

Based on the group’s preliminary projections, David said active COVID-19 cases in the country could hit 100,000 “anytime.”

Data from the DOH showed that for the period April 11-17, the number of new cases averaged 209 a day.

OCTA fellow Ranjit Rye said a jump in COVID-19 cases in the country would be “inevitable” because of the further opening of the economy and the threat of the Omicron subvariants.

“What we are saying is that there is a very big possibility of cases going up so our call, like the call of everyone who spoke before us, is for us to be vaxxed to the max,” Rye said also at the Laging Handa briefing.

But David said the possible spike in COVID-19 cases would not be as severe as the surge in January this year, adding that he was not expecting a high hospitalization rate should there be a spike.

While the new COVID-19 subvariants could “spread quickly” and “increase rapidly,” he pointed out that infections could also drop as fast due to the high level of vaccination in various areas in the country.

But health experts have been urging the government to ramp up the delivery of booster shots as less than a fifth of fully vaccinated Filipinos have been inoculated with their third dose of COVID-19 vaccine.

The health department also earlier warned that a 50-percent decrease in compliance with minimum public health standards could lead to nearly “half a million” active infections in Metro Manila by mid-May.

The DOH, however, has clarified that its warning was only a projection and was not cast in stone.

Concerns about a resurgence in COVID-19 infections arose after many parts of the country were placed under alert level 1, the most relaxed quarantine restriction allowing business establishments to operate at full capacity.

The campaign season for the May 9 elections also caused fears of political rallies becoming “superspreader” events.