Leni to Batangueños: I won’t fail you 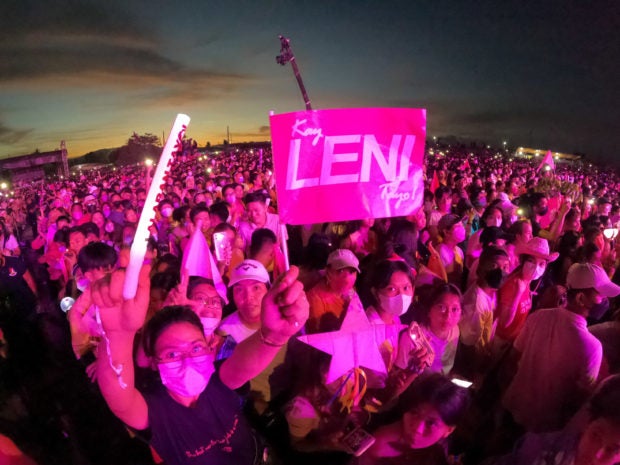 LEMERY, Batangas — I will not fail you.

Vice President Leni Robredo on Saturday made this assurance to her supporters as she and her running mate, Sen. Francis Pangilinan, toured two cities and six municipalities in vote-rich Batangas province.

The opposition tandem attended a multisectoral gathering just hours after their successful campaign rally attended by about 225,000 of their supporters, more known as “kakampinks,” in Santa Rosa City, Laguna, on Friday night.

“Why do we work this hard? First of all, we want to show you that if [Pangilinan] and I got elected, this is the kind of government that you can expect from,” Robredo told supporters who flocked to the municipal grounds here.

“It’s the government that will go to the people. This is what I promise you: I will not fail you,” she vowed, drawing loud cheers from the crowd.

This was the third visit of Robredo and Pangilinan to the country’s seventh vote-rich province, which has over 1.8 million registered voters since the campaign period started.

They kicked off their campaign with a dialogue with various sectors in Nasugbu town, before visiting the adjacent towns of Tuy, Lemery, Taal, and Sta. Teresita. She had meetings in Lipa and Batangas cities.

Robredo, Pangilinan, and their senatorial slate were scheduled to hold a grand rally in Bauan town in the evening.