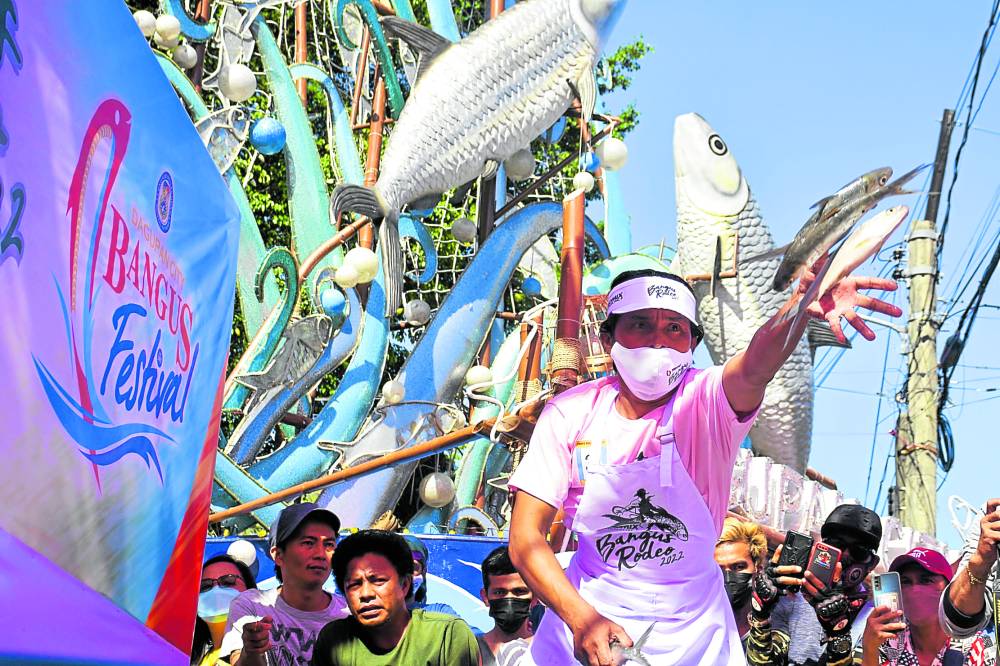 CLASSIFYING ROUND “Bangus” (milkfish) grower Fernando Doria Jr. wins the milkfish classifying contest, where participants sort the fish in four different weight categories during the Bangus Rodeo on April 28, one of the events in this year’s Bangus Festival in Dagupan City. —WILLIE LUMIBAO

DAGUPAN CITY — A local competition showcasing the skills of local “bangus” (milkfish) growers and fishpond workers made a comeback here on Thursday as one of the top attractions in the revived annual Bangus Festival, which was canceled in the last two years due to the pandemic.

The Bangus Rodeo has been a traditional event of the festival since it was launched by the late Mayor Benjamin Lim in 2002 to feature the city’s top product and the families engaged in fish culture.

Dagupan bangus have been dubbed as the “world’s tastiest” because of their juicy and tender flesh, which operators say is acquired because of the quality of water in the aquaculture areas, and because of “lablab,” a kind of algae found at the bottom of fishponds.

The Bangus Rodeo contests were dominated by the Caguiao family of Lucao District, winning the first and second prizes in the prettiest category, first in the longest, and third in the heaviest, according to organizers of the event sponsored by leading integrated aquaculture company Feedmix Specialist Inc.

Like in other “beauty” contests, their entries went through an intensive selection process, said Adela Caguiao, the family’s matriarch.

Caguiao said the night before, the family harvested some 8,000 pieces from their pond in Lucao District and chose the best that they would enter into the contest held in front of the city plaza.

What it takes to be the prettiest

According to the contest mechanics, a “pretty bangus” must have clear and well-rounded eyes; fine, smooth, and orderly scales; and a small, beautifully crafted head. It must also have red and fresh grills, a bulging belly, and firm and soft flesh, and must not weigh less than half a kilo but not more than a kilo.

Caguiao’s entry for the prettiest bangus obtained a score of 99 percent to clinch the first prize, and 96 percent to win the second prize.

For the longest bangus, the Caguiao entry, which measured 87.5 centimeters, won the first prize, while the top prize for the heaviest one was obtained by Marcos Discipulo, whose entry weighed 6.24 kilos.

Imelda Santillan, also of Lucao District, won in the fastest bangus “deboner” category when she set a record of one minute and 33.43 seconds.

In the fastest bangus eating contest, Jaime Bucao was able to consume two pieces of grilled bangus in two minutes, 14.31 seconds, to top the contest.

The fastest bangus classifier, or sorting the bangus into four different weight categories, was won by Fernando Doria Jr.