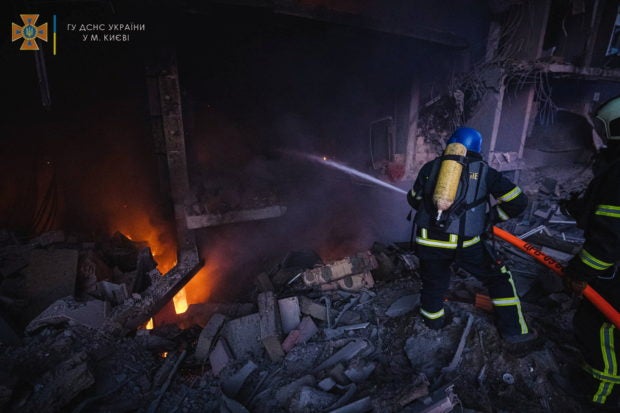 Rescuers work at a site of a residential building damaged by a missile strike, as Russia’s attack on Ukraine continues, in Kyiv, Ukraine, in this handout picture released on April 29, 2022. Press service of the State Emergency Service of Ukraine/Handout via REUTERS

KYIV — Ukrainian rescue workers on Friday recovered a corpse from the rubble of a building in Kyiv that was hit by a missile, Mayor Vitali Klitschko said.

The death was the first reported in Thursday’s missile strike as the head of the United Nations visited Kyiv. Ukrainian officials said two Russian missiles had struck the capital. Russia has not commented on the incident.

Russia’s defense ministry said also on Friday that its forces had destroyed the production facilities of a space-rocket plant in the Ukrainian capital of Kyiv with high precision long-range missiles.

“The armed forces of the Russian Federation continue the special military operation in Ukraine,” the defense ministry said.

“High-precision long-range air-based weapons destroyed the production facilities of the Artem rocket and space industry enterprise in the city of Kyiv,” it added.