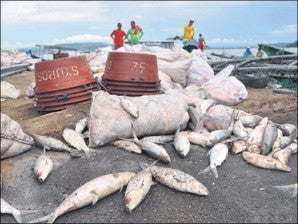 FISHKILL In this Inquirer file photo, workers bring to port tons of milkfish (“bangus”) killed in the Taal Lake in Batangas following a drop in temperature in May, 2011. This year’s intense summer heat, the same environmental problem poses danger to fishermen’s livelihood around the lake. ARNOLD ALMACEN

MANILA, Philippines—As the summer heat reaches its peak, Taal Lake fishermen should be prepared for possible fishkill due to temperature changes, the Bureau of Fisheries and Aquatic Resources (BFAR) has warned.

Perez said fisherfolk should check for physical abnormalities in their catch as well as columns of gas bubbles in the lake that could be a sign of carbon dioxide eruption.  They should also watch out for any discoloration of the lake waters which could indicate sulphur upwelling, he added.

“These naturally occurring phenomena are usually affected by temperature changes especially in the warm months of April to June and during the rainy months when typhoons occur,” he said.

Perez urged Taal Lake fisherfolk to follow sustainable fish farming practices so as not to compromise the health of the lake’s waters, an important source of food for Metro Manila and Southern Luzon. BFAR said the lake provides fish, mostly farmed tilapia and milkfish to as many as 1.6 million Metro residents. Fish catch from its open waters feeds some 200,000 people who each consume at least 39 kilos of fish a year, BFAR said.

To avoid a repeat of the massive fishkill in Taal Lake last year, Perez appealed to the Taal Lake Aquaculture Alliance, Inc. and feed millers to police their ranks and to comply with the guidelines embodied in the Taal Volcano Protected Landscape Management Plan of 2009.

“The overcrowding of fish cages, overfeeding, and the wilful disregard of the prescribed fish cage size have been found as major causes of serious oxygen depletion resulting to fishkills,” Perez said.

Taal fishermen last year suffered huge losses from fishkills that occurred from May to June. According to the BFAR, the phenomenon affected more than 2,000 tons of farmed fish with damages pegged at P148.5 million.

Subsequent investigation also showed that the lake was teeming with illegal fish cages. The agency said it dismantled over 7000 illegally-operated fish cages in compliance with the scientifically-determined environmental limit of only 6,000  fish cages in the entire lake.

This year, Perez said, the BFAR is conducting an awareness campaign to remind fish operators of the dangers of unsustainable fish farming methods. The BFAR will also provide technical and regulatory support to municipal governments in realigning and re-zoning fish cages. The agency, he said, will  monitor as well the water quality of the lake and patrol its waters.

Perez said they will hire additional manpower and deploy at least two patrol boats in the area to help determine the compliance of fish cage operators to the Management Plan. “Of importance are the prescribed limits for fish cages sizes of 10 m × 10 m × 6 m, the stocking densities and feeding regimen,” he added.

Agriculture Secretary Proceso Alcala meanwhile directed all heads of his department to be more proactive in addressing the impact of climate change on agriculture and fisheries. He noted that the present administration puts a high priority on the need to provide enough food for the country’s growing population while protecting the livelihood of small farmers and fishermen.

Read Next
Ignacio ‘Iggy’ Arroyo laid to rest, finally
EDITORS' PICK
A delightful blessing!
Gov’t plans to open COVID-19 vaccination for 5- to 11-yr-olds by January 2022
Gov’t eyeing COVID-19 vaccine booster for essential workers, indigents by Dec. 10
Villar Group gears up for AllValue Shopping Party on Dec. 3; around P 1-million promos and discounts up for grabs
Omicron variant detected in more countries as scientists race to find answers
Legarda: Ending Violence Against Women, a cause for all
MOST READ
Quiboloy warns of ‘much worse than Omicron virus’ if his ‘persecution’ is not stopped
Suspected Omicron cases mild, says leading S. Africa doctor
Bongbong Marcos’ conviction in tax case not a crime involving moral turpitude — lawyer
Marcoleta defends pol ads on ABS-CBN
Don't miss out on the latest news and information.