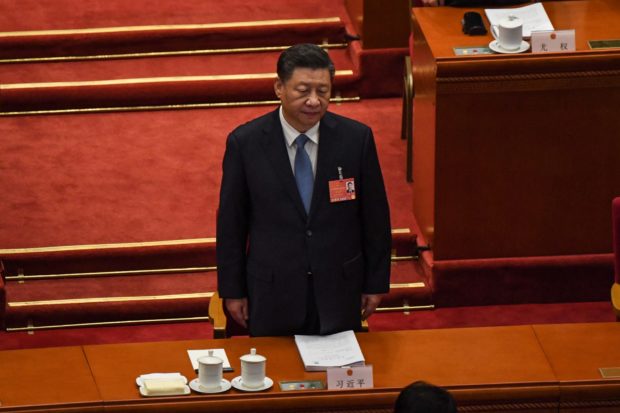 China’s President Xi Jinping attends the opening session of the National People’s Congress (NPC) at the Great Hall of the People in Beijing on March 5, 2022. AFP

BEIJING—China’s Xi Jinping has called for an “all-out” campaign to build infrastructure, according to state media, marking the latest attempt by leaders to boost growth in the Covid-battered economy.

Despite struggling to defeat the country’s worst outbreak in two years, the leadership is digging in its heels with a strict zero-Covid policy that involves lockdowns in the biggest cities and mass testing.

But the measures have snarled supply chains and hammered business morale, sending shockwaves through the global economy and markets.

“Infrastructure is an important support for economic and social development,” Xi said at a high-level meeting on Tuesday, according to the official Xinhua news agency.

And the Central Committee for Financial and Economic Affairs added that China’s “infrastructure is still incompatible with the demand for national development and security”.

The meeting identified several sectors such as transport and energy where an infrastructure boost was needed, including the construction of ports and airports.

Recent lockdowns have clogged supply chains and transport networks — including in the economic dynamos of Shanghai and Shenzhen as well as the northeastern grain basket of Jilin.

Xi’s comments are the latest in a series of statements and steps aimed at boosting confidence in the economy and reassuring markets.

Shares in infrastructure firms rose Wednesday on the back of Xi’s comments, including construction company Sany Heavy Industry and China State Construction International.

A major spending push, however, could also reignite debt worries.

After the 2008 financial crisis, Beijing launched a stimulus package worth hundreds of billions of dollars — including massive infrastructure investment — but that piled on the debt for local governments and state enterprises.

“Lockdowns make the task of ramping up infrastructure investment more difficult due to… travel bans and shortage of construction workers in… (affected) areas,” he told AFP.

It would also “be unrealistic to expect much faster infrastructure investment growth, and its pace… would only fill a small part of the gap left by slowing export growth, the large property sector contraction and the rising costs of China’s zero-Covid strategy,” Nomura said in a recent report.