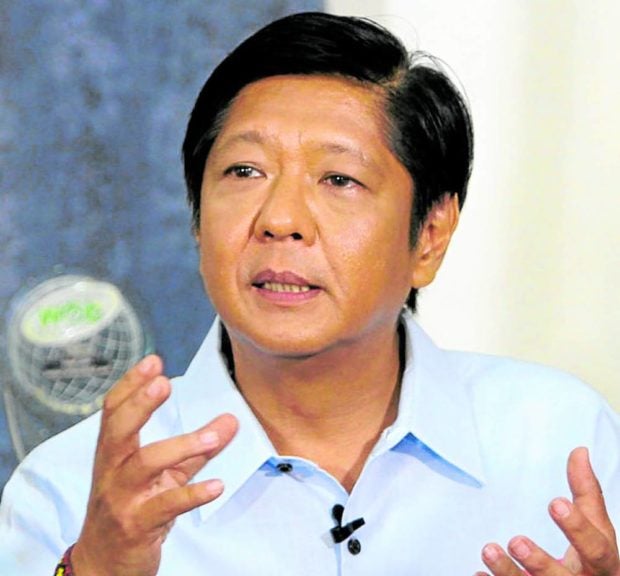 MANILA, Philippines — Presidential candidate Ferdinand Marcos Jr. said the country’s “dire” situation in 1972 made it necessary for his father and namesake, the deceased dictator and former President Ferdinand Marcos, to declare martial law.

“We were fighting a war in two fronts. We had the secessionist movement in the south. We had dissident [Communist Party of the Philippines-New People’s Army] in the countryside. And these were people who wanted to bring down the government and the government had to defend itself,” Marcos said in an interview on CNN Philippines on Tuesday.

He is the perceived frontrunner for the May 9 election, where a victory would cap off a three-decade political fightback for a family driven from power in the 1986 uprising against its notorious 20-year rule marked by human rights abuses and corruption.

Not just his family

Marcos vowed to fight graft and corruption at every level of the bureaucracy should he become president by strengthening the Presidential Commission on Good Government (PCGG), which was specifically created to recover billions in missing Marcos wealth.

“We’re talking about graft and corruption—that’s their job. Then strengthen it: Give them a bigger budget; give them more staff so they can go after all (who are corrupt) and file a case in the Office of the Ombudsman,” he said.

Reminded of the P100-billion unrecovered ill-gotten wealth of his family, Marcos claimed he was not familiar with it.

He only said that instead of going after the “Marcoses only,” the PCGG should also crack down on other people involved in corruption.

Asked how he would fight graft and corruption, he said, “Leading by example is very simple. You don’t tolerate any kind of … act by some of taking money from government.”

Marcos called his father his idol but said that his mother, Imelda, was the “supreme politician in the family.”

“My father is the statesman, he is the political genius, he is all that,” he said.

The deceased former president ruled for two decades, almost half of it under martial law during which thousands of his opponents were beaten and tortured, and disappeared or were killed.

He and Imelda were accused of stealing billions from state coffers, allegations they continue to dispute.

‘A little spoiled, well-attended to’ – Marcos Jr. on Palace life