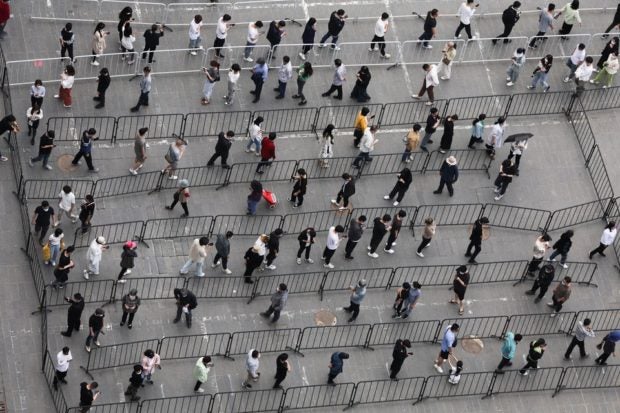 Residents line up at a makeshift nucleic acid testing site during a mass testing for the coronavirus disease (COVID-19) following the outbreak, in Beijing, China April 25, 2022. REUTERS

BEIJING — China’s capital Beijing swiftly expanded its COVID-19 mass testing from one district this week to most of the city of nearly 22 million, adding to expectations of an imminent lockdown similar to Shanghai’s.

Beijing began testing the residents of its most populous district Chaoyang on Monday. By the end of the day, even though only a fraction of the results had come out, the city decided to conduct tests on 10 other districts and one economic development zone by Saturday.

The Chinese capital reported 33 new locally transmitted cases for April 25, the city’s health authority said on Tuesday, of which 32 were symptomatic and one was asymptomatic. That was slightly higher than 19 community infections reported a day earlier.

Beijing’s decision to now test roughly 20 million people came just days after tens of infections were found. In contrast, Shanghai waited for about a month and more than 1,000 cases before launching a city-wide mass testing drive in early April.

“To resolutely curb the risk of the spread of the epidemic and effectively maintain the health of the citizens, it was decided to further expand the scope of regional screening on the basis of the tests done in Chaoyang district,” a spokesman of Beijing’s municipal government said on Monday night.

Three rounds of PCR tests will be conducted from Tuesday to Saturday in the districts Dongcheng, Xicheng, Haidian, Fengtai, Shijingshan, Fangshan, Tongzhou, Shunyi, Changping, Daxing, as well as the Beijing Economic-Technological Development Area.

Asian markets suffered their worst day in over a month on Monday on fears that Beijing was about to enter such a lockdown. Chinese shares slumped to a two-year low.