newsinfo / Headlines
Headlines
INITIAL TARGET AMONG MOST VULNERABLE: 7,000 TO 13,000 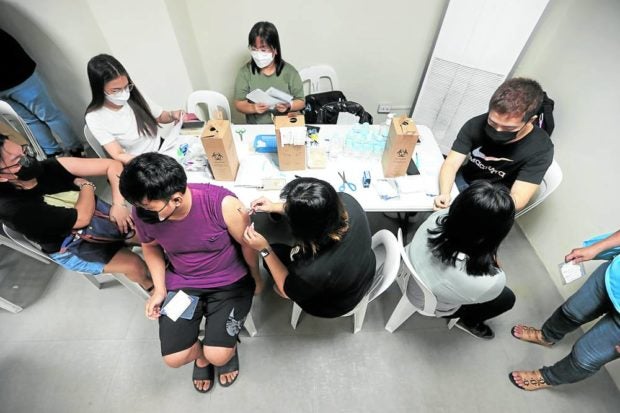 VAX GOES ON | People continue to get their COVID-19 vaccine shots in Marikina City on Monday as the government begins administering the second booster dose to the most vulnerable members of the population. (Photo by NIÑO JESUS ORBETA / Philippine Daily Inquirer)

Of 690,000 Filipinos deemed most vulnerable, between 7,000 and 13,000 have initially been targeted for the second round of boosters to increase protection against COVID-19 and its variants.

“Because of increasing vaccination coverage, while COVID-19 is still there, in the near future we can consider this as an endemic disease,” Health Secretary Francisco Duque III told a public forum.

“They only need to coordinate with their local government units. For those in Quezon City, our vaccination site there is open on Thursday and Friday for the booster doses,” PMA president Dr. Benito Atienza said at the Laging Handa public briefing.

“If there will be a surge, they will be first to be affected so the immunocompromised are prioritized. Their immune system is vulnerable,” he added.

Under this category are people with immunodeficiency, HIV, active cancer or malignancy, and other conditions as certified by health professionals. They may also be transplant recipients, bedridden, currently receiving steroid treatment, or have a poor prognosis.

The Department of Health (DOH) said more vaccination sites would be open in the coming days.

Earlier, the Food and Drug Administration granted the amendment of the emergency use authorization for specific COVID-19 vaccines to be used as second booster shots for senior citizens, the immunocompromised and front-line health-care workers.

The dose, however, should be given at least four months after the administration of the first booster, since immunity may wane in these priority groups.

As of April 18, some 66.9 million Filipinos had completed their primary doses of the COVID-19 vaccine. However, only 12.9 million had received their first booster shot.

Atienza encouraged those who had yet to get a booster dose to do so, especially the elderly. Barangay Health Workers party-list Rep. Angelica Natasha Co, meanwhile, suggested that DOH and local governments allow walk-ins and offer incentives to encourage more people to get boosted a second time. She also batted for the inclusion of barangay workers in the priority groups.

With 3.68 million cases overall and more than 60,000 deaths, the Philippines has suffered one of the worst COVID-19 crises in Southeast Asia, although new daily infections have fallen significantly.

This was 12 percent lower than the previous week’s 1,674 new cases or 239 average daily cases.

Hospital admissions due to COVID-19 generally remained low, although the number of severe and critical patients went up this week.

—WITH REPORTS FROM JANE BAUTISTA, JEANNETTE I. ANDRADE AND REUTERS

2nd booster shot: Continuing the fight against COVID-19 in PH

DOH: Half of healthcare workers yet to receive COVID-19 booster shot