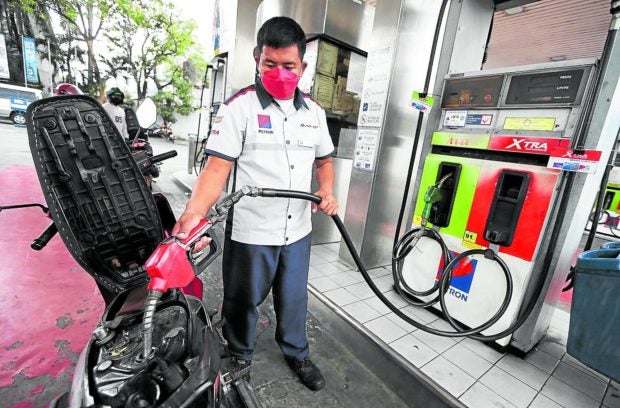 MANILA, Philippines — Candidates for the 2022 national elections should unite behind the call to suspend excise taxes on fuel products as another wave of oil price hike approaches, activist group Bagong Alyansang Makabayan (Bayan) said on Monday.

In a statement, Bayan secretary general Renato Reyes said that candidates must speak on the issue of oil prices continuously rising, along with the provision of social aid, as effects of the hikes have started to spillover to other industries.

“We call on all presidential, vice presidential and senatorial candidates to rally behind the call to suspend oil taxes NOW in light of another big time oil price increase,” Reyes said.

“This is an issue where unity is needed to press the Duterte regime to provide immediate relief for consumers,” he added.

According to Reyes, while candidates are busy campaigning for the 2022 polls which is less than two weeks away, people have been bearing the brunt of high oil prices.

“The elections may be near, and candidates are busy, but the people have been battered no end by these price increases. The Duterte regime must act now,” he noted.

READ: PH among the worst hit by steep oil prices

A big-time oil price hike is expected to be implemented starting Tuesday midnight, sources told several news sites on Saturday. Prices of diesel may increase between P3.80 to P4.00 per liter, while gasoline fuel may increase by P3.10 to P3.30 per liter.

This means that price of both diesel and gasoline fuel may either go near P80 per liter or even past the P80 mark for premium variants.

This is not the first time that oil prices in the country increased.  At one point in March of this year, oil prices went up between P8 to P10 per liter, as an effect of global unrest due to the Russian invasion of Ukraine.

While oil prices went down by a huge percentage the following week after, prices returned to the P70 range due to upsurges in April.

There have been several calls also to suspend the excise taxes, but the Department of Finance shot down these suggestions, offering a monthly subsidy for hardest-hit families instead.

RELATED STORY:
Consumers get relief as oil firms cut down prices of fuel