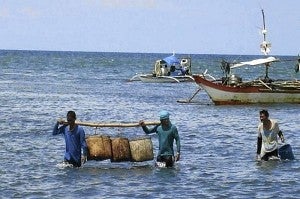 ROXAS CITY—Two decades ago, Roxas City in Capiz almost lost its prized shellfish “diwal” due to overharvesting. Only the thorough comprehensive rehabilitation program in 1997 saved the bivalve from near extinction.

Now, diwal, also known as “angel wings,” is one of the tourist-drawers of the city and the much sought-after delicacy is partly responsible for its recognition as the country’s “seafood capital.”

Measuring 3 to 5 inches, the shellfish are mostly found in Barangays Barra, Libas, Cogon and Punta Cogon, growing at a water depth of 20 to 25 feet. Six to seven months from spawning, divers harvest the diwal, using improvised gears.

Prices of diwal range from P150 to P300 per kilogram, skyrocketing to P800 to P1,000 per kg during the nonharvest season when the shellfish are brought to restaurants on Boracay Island and in Manila.

Gathering of diwal started in the 1970s, but the demand for the shellfish rapidly grew in the 1980s, according to Belinda Garrido, Roxas coastal resource management coordinator.

Overharvesting resulted in the rapid decline of volume in 1987 and the bivalve had since remained scarce for almost a decade.

Garrido said the city government implemented a rehabilitation and regulation program to save the diwal from extinction. The program involved, among other components, a research conducted by marine scientist Dr. Liberato Laureta of the University of the Philippines- Visayas, which became a basis for the four-year moratorium on diwal harvesting. 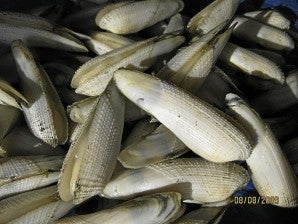 DIWAL is a sought-after and expensive delicacy in Roxas City, Capiz.

In 2004, gathering and harvesting resumed. Fifteen tons of diwal worth P2.25 million were taken from a 1-hectare area. The next year, volume went up to 65 tons valued at P9.542 million.

Harvesting, however, had to be stopped from 2007 to 2008 as excessive volume and bad weather again depleted the diwal stocks in 2006.

Garrido said that in 2006, the city government installed the first of around 3,080 concrete jackstone-shaped barriers in the breeding grounds to prevent trawling and illegal gathering. The barricades, which cost P1,000 each, also serve as protection for diwal breeders and against sand drifting.

The industry bounced back from July 2009 to December 2010 with a 300-ton output from a 5-hectare area. Two years after, volume again dropped to 43.76 tons due to unfavorable weather.

Sustaining the industry has been critical to the livelihood of around 200 diwal divers and boat operators.

“When harvesting was unregulated, it took years (for the shellfish) to recover and there were times when we did not have any harvest. Now, we can harvest yearly,” said

Harvesting is done by four divers per motorized boat. A third of the income goes to the divers while the rest goes to the boat operator.

Divers can earn up to P1,000 per dive, which lasts four hours at most, each day, three times a week.

Harvesting is suspended when the volume falls below 300  tons, Garrido said. This is to ensure that there will be enough breeders for the next season.

During the lull, the divers turn to fishing for their livelihood. “We need an alternative and extra source of livelihood because income from diwal-diving is unstable and dependent on the weather,” Agana said.

How to sustain the rehabilitation of a still fragile industry is a major challenge.

Rizalde Astrolabio, a fishing regulating officer, said that aside from strictly implementing harvest regulations, the city had deployed Bantay Dagat patrol boats to guard against illegal diving for diwal. The patrols focus on a 4,000-square-kilometer area where the diwal areas are concentrated.

Violators are slapped with  a P5,000 fine per offense and the confiscation of boat and diving equipment for repeated offenses.

Astrolabio said illegal harvesting had continued because divers were tempted by the high demand and price for the delicacy.

“As long as there are breeders, spawning will continue. But these have to be protected and regulations should be strictly imposed,” she said.

Abnormal and unpredictable weather patterns also pose a challenge to the industry. Strong water currents, drifting sand and silt carried by heavy rain from the upland areas could suffocate the shellfish, Garrido said.

But with continued vigilance and commitment from the community, the diwal industry would continue to develop as Roxas’ most exotic delicacy, she said.