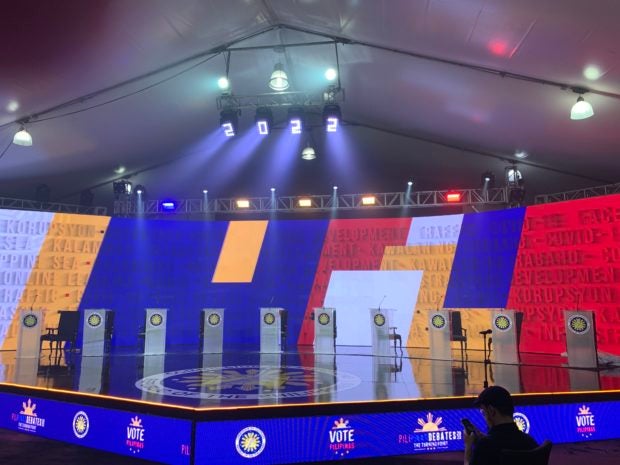 The Commission on Elections places 10 podiums for its “PiliPinas Debates” scheduled on Saturday, March 19, 2022, at the Sofitel Hotel in Pasay City, even if only nine presidential candidates signified their participation in the event. (FILE PHOTO BY JOHN ERIC MENDOZA | INQUIRER.net)

MANILA, Philippines — The Commission on Elections (Comelec) is investigating the possible criminal liability of its executives involved in an allegedly “grossly disadvantageous” deal with Impact Hub Manila, the private firm tapped to organize the presidential and vice presidential debates sponsored by the poll body.

The Comelec on Friday was forced to postpone by a week its final debates scheduled on April 23 and April 24 after its event organizer was unable to pay some P14 million to the hotel used as the venue.

On the eve of the scuttled April 23 vice presidential debate, the Sofitel Philippine Plaza Manila disclosed that Impact Hub’s checks have repeatedly bounced.

Last Saturday, Impact Hub said in a statement that there were some “misunderstandings” with the management of Sofitel that led to the postponement of the last round of the debates.

Comelec Commissioner Rey Bulay, Manila’s former chief prosecutor who is leading the internal probe, expressed surprise that Comelec allowed Impact Hub to profit from the debates by selling airtime for commercials, and that the poll agency nearly paid the organizer P15.3 million without any legal basis.

“The commission is conducting an investigation to determine the liability of Impact Hub and others who are also liable in this transaction, which now appears to be manifestly and grossly disadvantageous to the government,” Bulay said in an interoffice memo dated April 21.

Bulay warned that Comelec officials would face criminal liability if they release the P15.3 million in supposedly “counterpart” money to Impact Hub.

Bulay urged his fellow commissioners to sever ties with the company “considering that Impact Hub’s actions … are tantamount to incurring criminal liability.”

“Eventually, the commission should consider the filing of the corresponding charges against those found liable,” he pointed out.

Unlike in the 2016 presidential elections, Comelec this time took it upon itself to organize the televised presidential and vice presidential debates called PiliPinas Debates.

In his memo to top poll officials demanding an explanation, Bulay asked why, despite Sofitel’s letter on March 31 that Impact Hub’s checks have repeatedly bounced, Education and Information Director James Jimenez guaranteed that Impact Hub would be able to pay up.

Jimenez had assured Sofitel that “under the MOA [memorandum of agreement with Comelec], Impact Hub Manila will receive a total budget of P15,300,000 for the staging of the said debates.”

“In full support of the team behind Impact Hub Manila and its founder Celeste Eden Rondario, I would like to offer my vote of confidence that the provider will honor the checks due to Philippine Plaza Holdings Inc. (owner of Sofitel Hotel),” Jimenez wrote the hotel general manager on April 1.

Comelec has yet to categorically say whether or not the funds were released.

No expense to Comelec

However, the MOA dated March 7 signed by then acting Comelec Chair Socorro Inting and Rondario, with Jimenez and Lawrence Libo-on from Impact Hub Manila as witnesses, did not provide for any P15.3-million counterpart money to be paid to the organizer.

Bulay demanded an explanation from poll officials “whether there is any intention or internal arrangement to set up the chair and commissioners for liability, especially for graft and corruption.”

He said the Comelec had no obligation to pay Sofitel since it was Impact Hub that entered into a contract with the hotel.

“We all know that the debates are done without any expense from the Comelec. Nowhere can we find any resolution or contract which properly underwent the rigorous review of the legal department and the stringent requirements of Republic Act No. 9184 (government procurement law) … Thus for any release of public funds on this matter, I vehemently object as it would be criminal,” he warned.

Bulay also unearthed a letter from Kapisanan ng mga Brodkaster ng Pilipinas to Pangarungan dated April 7 reporting that the media organization had offered to organize the debates at no cost to the Comelec, but it backed out because it was required to air 15 minutes worth of commercials potentially worth millions of pesos “solicited by the commission and/or organizers.”