At least 3 people shot near preparatory school in Washington, DC 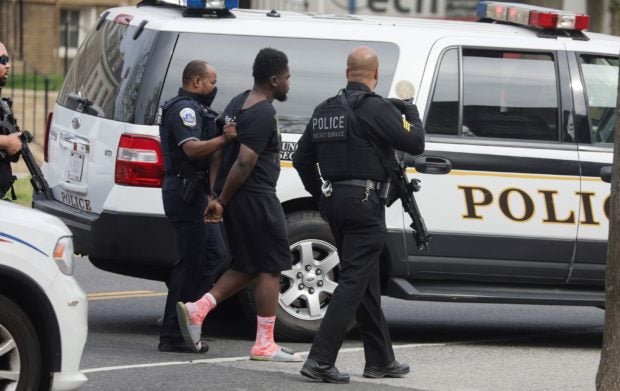 Police were called to the scene of a shooting near a preparatory school in Northwest Washington, D.C., on Friday where at least three people were wounded by gunfire, police said on Twitter.

There was no immediate official word on details of the shooting or on the condition of the victims.

An eyewitness told local television station WUSA-TV he heard a burst of rapid gunfire lasting about a minute, and saw one woman running out of a building who appeared to have been grazed by a gunshot, followed by other individuals who were apparently wounded.

The eyewitness said he saw other people on the street taking cover behind parked cars and pointing up to a balcony where they presumably believed the gunshots originated.

A WUSA reporter posted a short video on Twitter of another witness identified as Austin Bittle who said he was in a nearby coffee shop when he heard more than 20 gunshots ring out in quick succession before seeing police officers racing toward the scene.

A separate video clip tweeted by WUSA showed two officers escorting a man along a sidewalk with his arms behind his back, apparently in handcuffs, but it was not clear whether the individual was involved in the shooting.

Police said on Twitter that two male victims and one female victim were located at the scene, but their conditions were not described.

According to the District of Columbia’s Metropolitan Police Department, the shooting unfolded in 4100 block of Connecticut Avenue in the city’s northwest quadrant, adjacent to the Edmund Burke School, a private college preparatory academy.

“I was in the building and I was getting ready for track practice, but then I heard loud noises and glass was shattering behind me. A bunch of us just got out of the building and ran,” one unidentified student told local ABC affiliate WJLA-TV in an interview from a liquor store, where the youth had taken cover.

News footage on local television showed Connecticut Avenue, a major thoroughfare, blockaded by emergency vehicles. Dozens of police vehicles, with flashing lights, were parked outside the school building, as police in full tactical gear and some in camouflage assembled nearby.

“It was madness. I mean, it’s just unbelievable,” Jade Moore, an Edmund Burke parent, told WJLA of the incident, which she said left her daughter huddled inside a classroom until police escorted her and other students to a safer part of the campus. “You know, you think they’re safe, but you’re not safe anywhere.”

The upscale neighborhood also is home to several foreign embassies, Howard University, and the Van Ness campus of the University of the District of Columbia, which said on Twitter that it had been placed on a security lockdown.

A second well-known prep school, the Sidwell Friends School, also was reported by local media to be on lockdown.