PH tourism rising on its feet as COVID rules ease 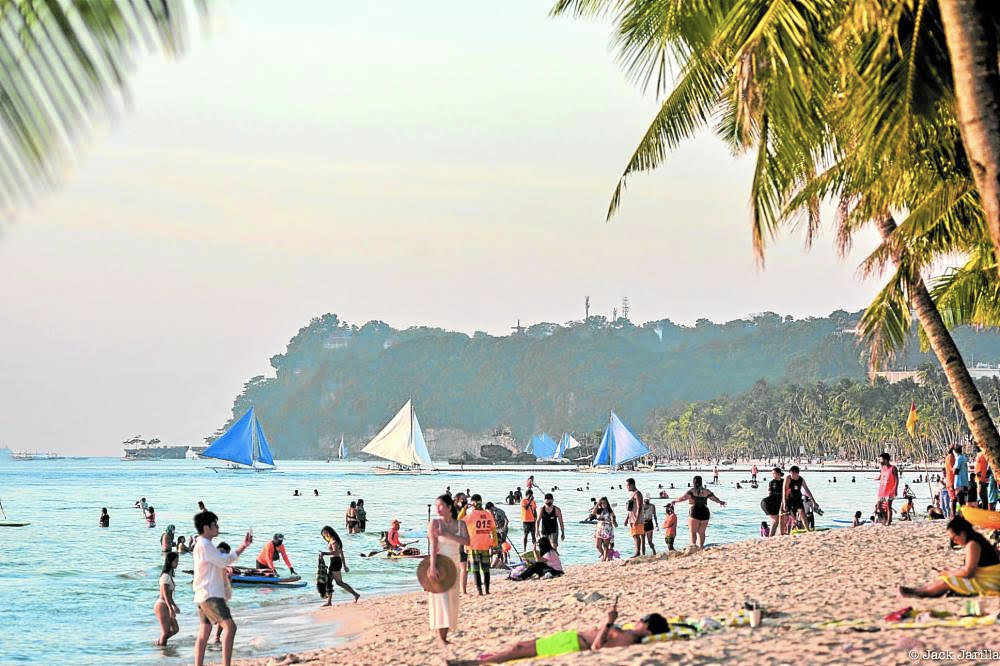 TOURISM IS BACK. Tourists return to Boracay as COVID restrictions are eased. JACK JARILLA/FILE PHOTO

MANILA, Philippines—While the last two years have been tough because of COVID-19 lockdowns, this year, the tourism industry is “firmly” on the road to recovery, the World Tourism and Travel Council (WTTC) said.

This, as the WTTC’s Economic Impact Report (EIR) revealed on Wednesday (April 20) that the Philippine tourism industry generated $41 billion or 10.4 percent of GDP in 2021.

WTTC President and CEO Julia Simpson, who stressed that the growth was because of domestic travel and relaxed restrictions, said the tourism economy has passed through the critical point and is getting better. 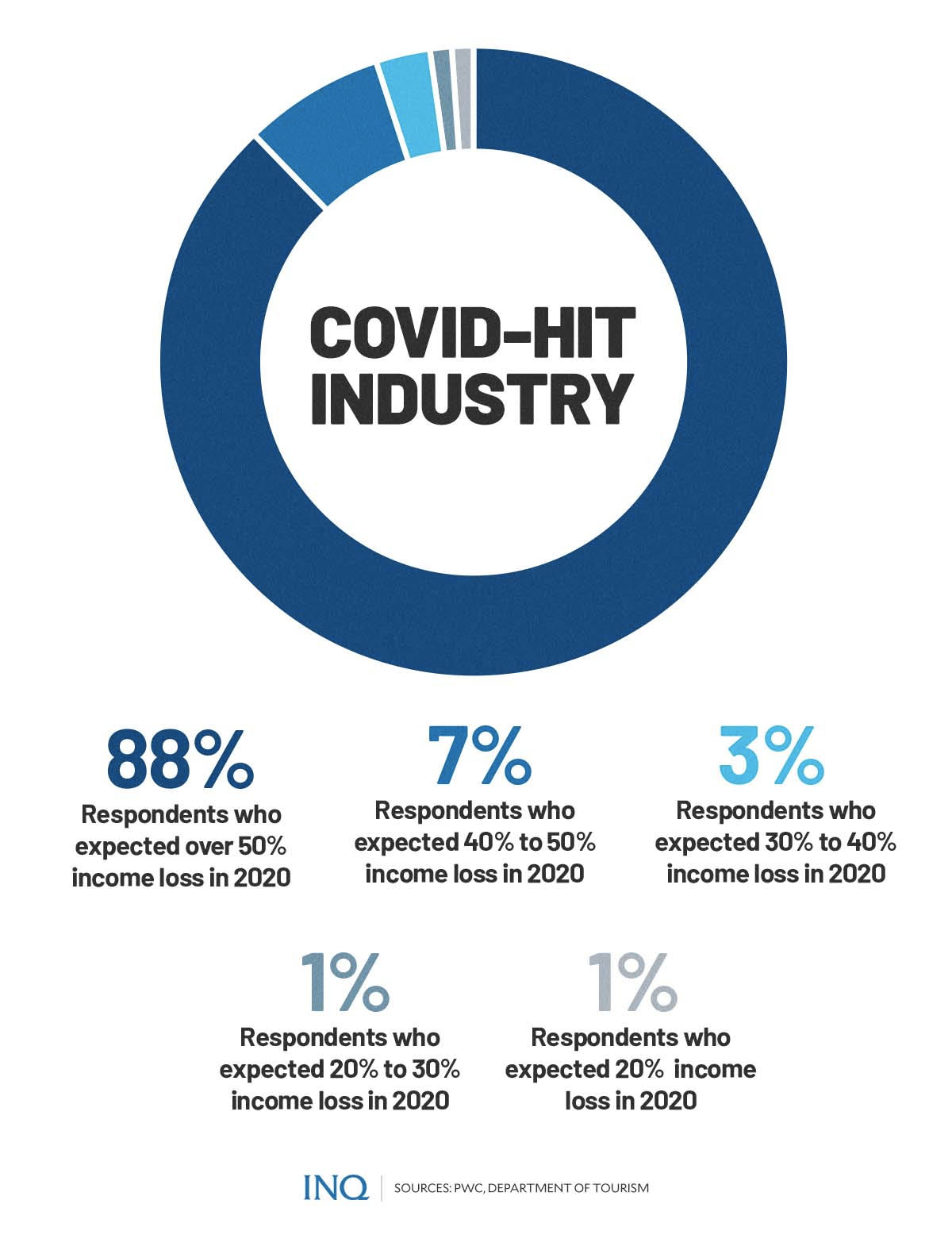 Back then, the study of the PwC and DOT said 78 percent and 61 percent of tourism-related businesses had decided to close temporarily because of COVID-19 restrictions and lack of demand. 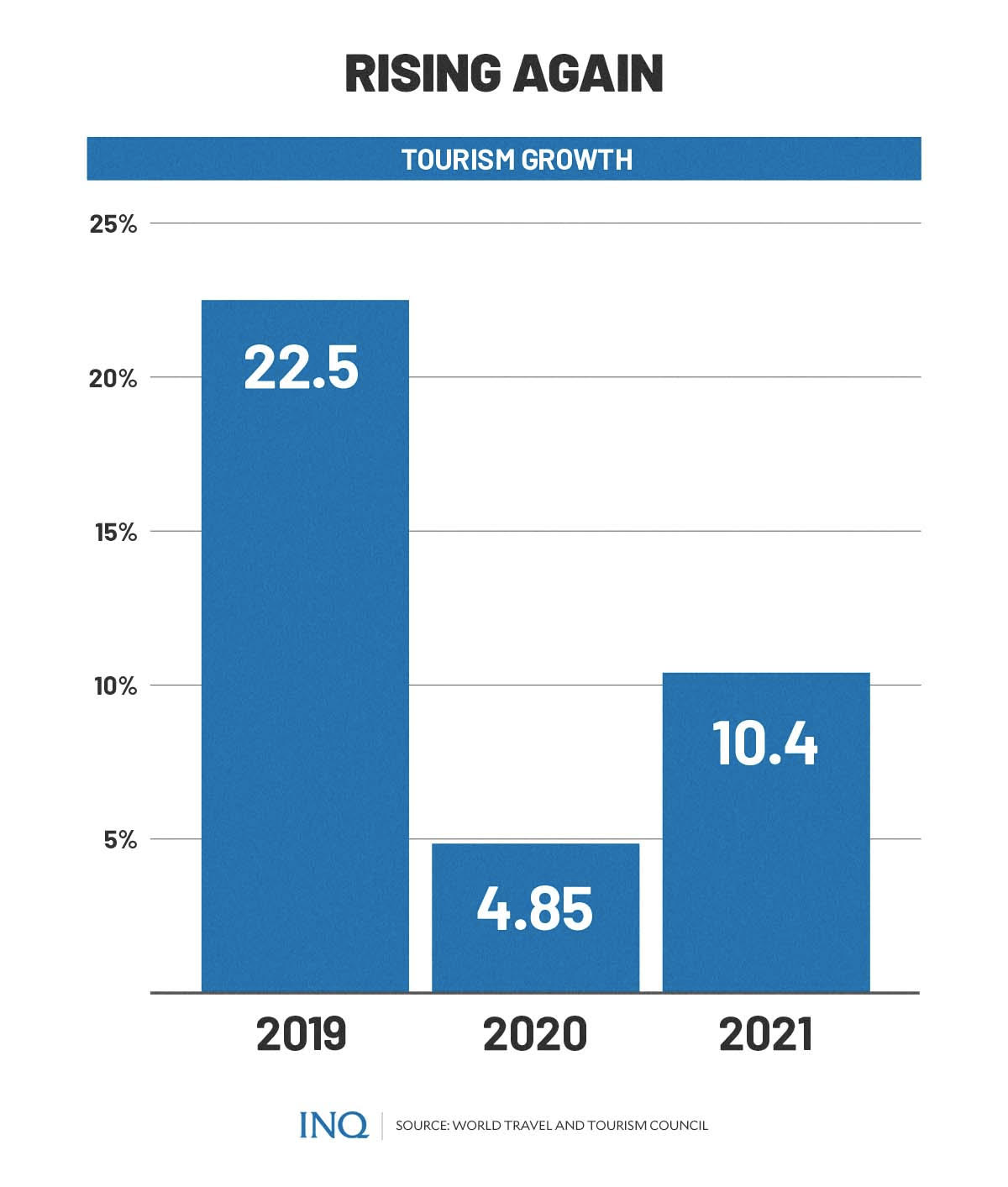 Last year, the Philippine Statistics Authority (PSA) revealed that the share of the industry to the gross domestic product (GDP) fell from 12.8 percent in 2019 to 5.4 percent in 2020, the lowest in 20 years.

The DOT said the PSA data was a reflection of the immense challenge to the tourism industry, stressing that the “severe damage” caused by the COVID-19 crisis was unexpected and not preventable.

Tourism Secretary Bernadette Romulo-Puyat said in 2020 that she has “high hopes” that the industry will recover: “We will come out better from the present challenges that we face.”

The EIR, the WTTC said, was based on constant 2021 prices and exchange rates from the Oxford Economics and the United Nations World Tourism Organization. 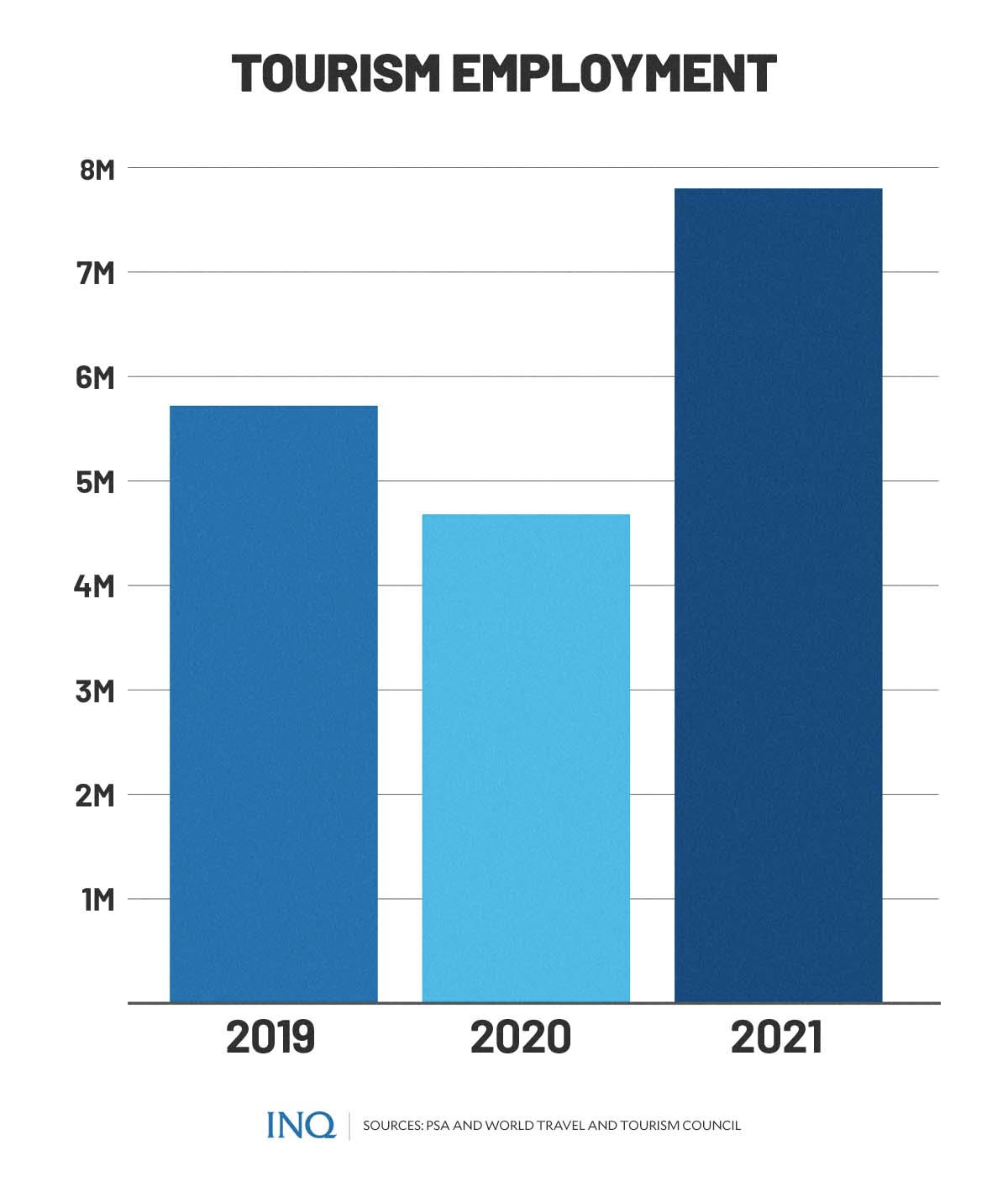 Puyat said the DOT is working on making travel easier and seamless for all. “We’re getting there,” she said, stressing that with the relaxed restrictions, especially on travelers, the “industry will recover”.

Simpson said the $41 billion share of the tourism industry to the economy even helped the Philippines to be the world’s fourth fastest-growing economy in 2021.

Last Sunday (April 17), the DOT revealed that there are already 272,000 international arrivals.

This, as the Philippines was ranked 13th in Asia’s Travel-Ready Index 2022 of the UK-based The Economist Intelligence Unit (EIU) with an overall score of 3.75. The EIU said a lower score indicates advantageous conditions for recovery. 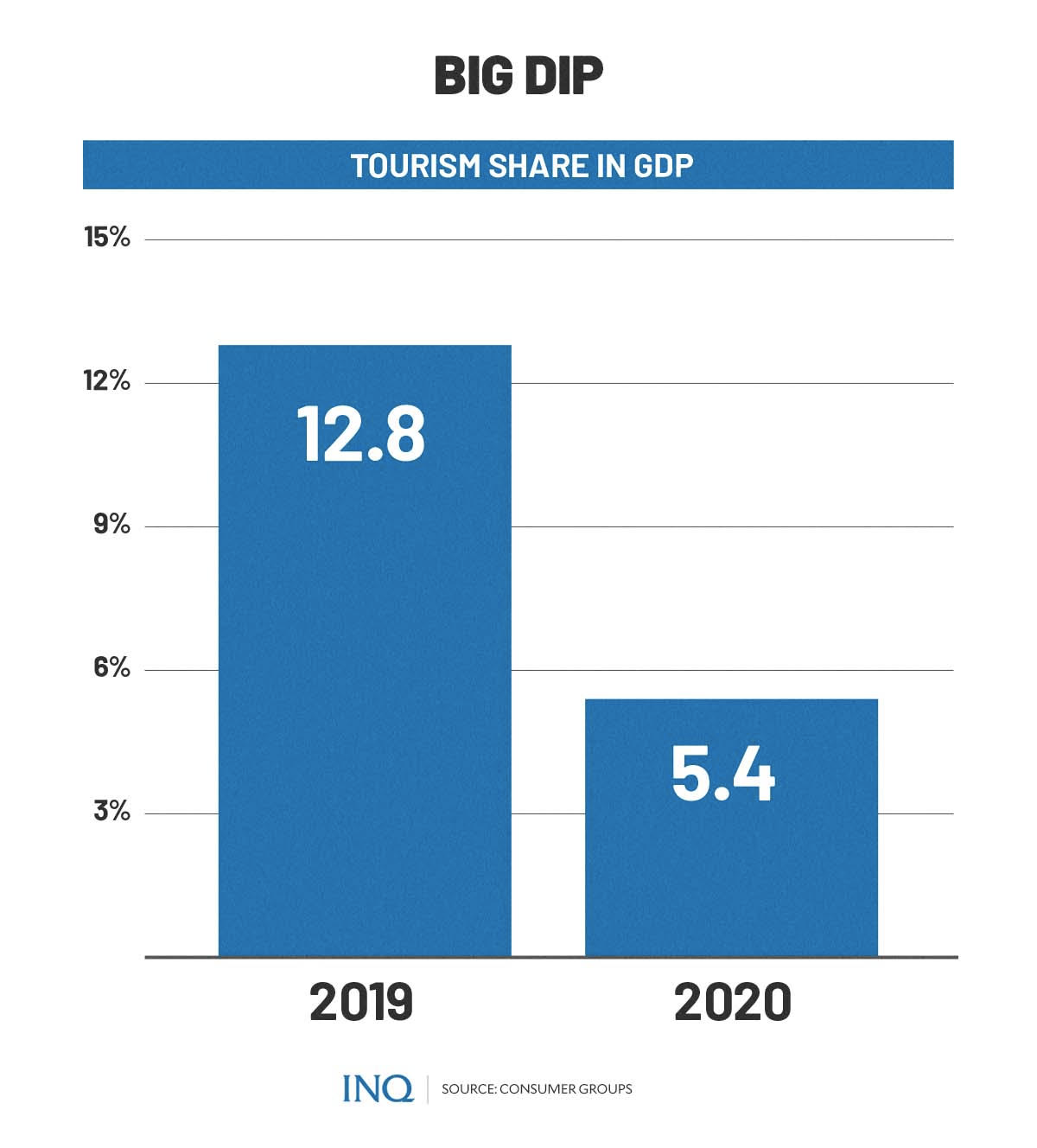 Simpson said that by 2032, the industry is seen to grow by 6.7 percent, higher than the 5.6 percent, which is the expected overall economic growth rate.

In 10 years, the WTTC said the tourism industry’s GDP share could be worth in excess of $155 billion or 21.4 percent of the economy.

Likewise, employment is expected to rise yearly by an average of three percent over the next 10 years, generating a critical 2.9 million or 21.5 percent of all employment in the Philippines.

Puyat said she was glad that the Philippines was finally open: “We’ve been open since Feb. 10 and to all since April 1. I believe that in Asia, we have the least restrictions.”

However, she told dzBB on Tuesday (April 19), that “we should not compromise health and safety because if COVID-19 cases rise, people will lose their livelihoods again.” 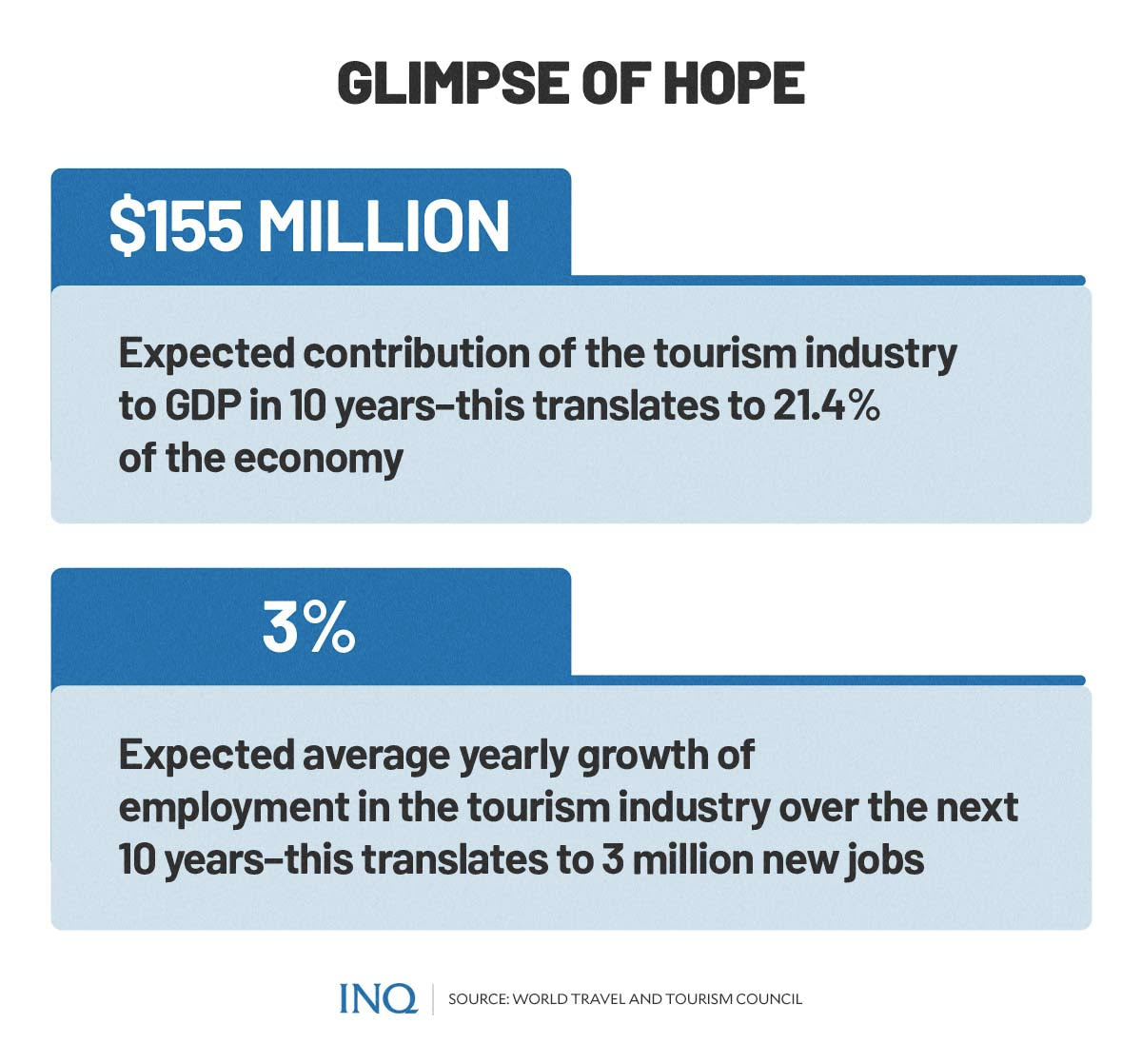 She stressed this as the DOT said Boracay had 21,252 travelers on Holy Thursday (April 14), higher than the island’s daily carrying capacity of 19,215 set by the Department of Environment and Natural Resources.

“I was begging local governments, before, to open, now, I am asking them to follow minimum health and safety protocols because there’s a possibility that COVID-19 cases will rise again,” Puyat said.

She said she was confused because the local government of the island, before, was so restrictive that it even required people to wear masks while swimming.

However, the local government said there were no clear guidelines or rules on how to control or limit tourists on Boracay Island when arrivals breach the daily limit.

The World Health Organization said the Philippines may have as much as 300,000 active COVID-19 cases by the middle of next month if the public lowers its guard against the virus.

READ: WHO: 300K active COVID-19 cases in PH by May possible if health standards neglected