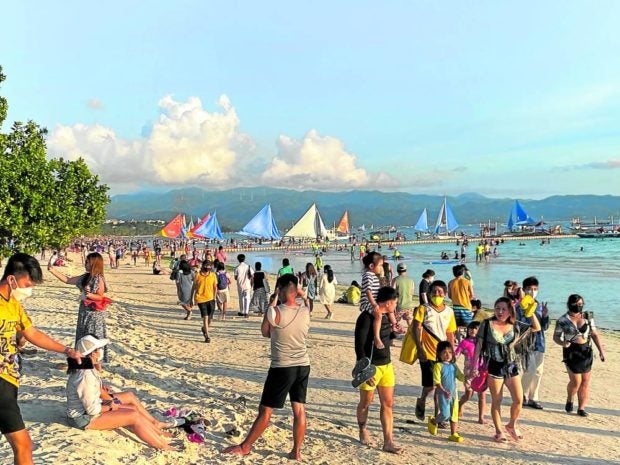 SUNSET CROWD | Tourists gather at the main beach on Boracay Island on Good Friday to watch the sunset. The resort island in Malay, Aklan, hosted its biggest number of visitors amid the pandemic during this year’s Holy Week as the government started relaxing travel restrictions. (CONTRIBUTED PHOTO)

But local officials also pointed out that there were no clear guidelines or rules on how to control or limit tourists on Boracay Island when arrivals breach the daily limit.

“We cannot just tell resorts to stop accepting tourists. And do we distribute the allowable number of tourists among hotels and resorts? How do we do that?” Acting Malay Mayor Frolibar Bautista told the Inquirer in a telephone interview on Tuesday.

The DOT, in a statement on Monday, said the island’s daily carrying capacity, pegged at 19,215, was breached during the Holy Week.

“The [DOT] has apprised both the Department of the Interior and Local Government (DILG) and the Department of Environment and Natural Resources (DENR) of the breach in carrying capacity. We continue our coordination with them, especially the DILG, which has jurisdiction over the [local governments], to address this concern and prevent similar incidents from happening in the future,” the DOT said.

Data from the Malay municipal tourism office showed that 12,266 visitors arrived on April 14, Maundy Thursday, with the total number of tourists that day reaching 21,252, including those who arrived earlier and had not left the island.

But Aklan provincial administrator Selwyn Ibarreta, who also supervises the province’s tourist validating team, said the total number of tourists on April 14 and April 15 were 10,921 and 11,140, respectively, which were within the island’s carrying capacity.

He said the much higher figures of the municipal government was due to the absence or exclusion of data on tourists who left the island from April 9 to April 11. 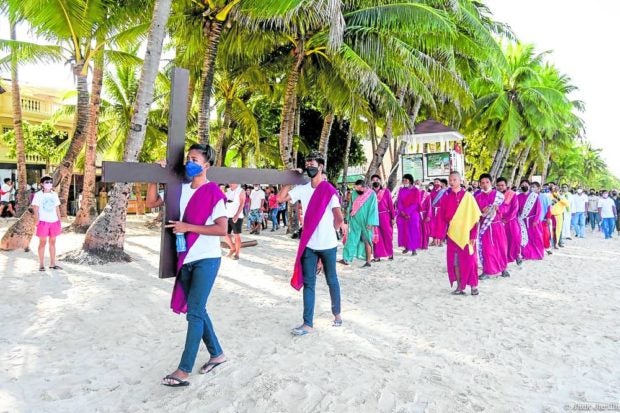 Martin Jose Despi, general manager of the Boracay Inter-Agency Rehabilitation and Management Group, said the carrying capacity was also breached on April 15, Good Friday, with tourists reaching more than 22,000, based on data of the municipal government.

Arrivals last week were considered the highest in two years before the COVID-19 pandemic restricted travel. Bautista said Holy Week was traditionally a peak period for tourism in Boracay.

The provincial government, he said, processes applications of tourists for entry into the island and issues quick response (QR) codes.

Boracay’s carrying capacity of 19,215 tourists at any given time was set by the DENR and other agencies as the government closed the island from April 26 to Oct. 25, 2018, to pave the way for its environmental rehabilitation.

The average daily tourist arrivals should be around 6,405 to avoid exceeding the island’s carrying capacity, according to government agencies. Before its closure in 2018, the island’s population, including tourists, was 70,781 per day.

Ibarreta said there was no existing mechanism or policy that would stop or limit the entry of tourists when the carrying capacity was reached.