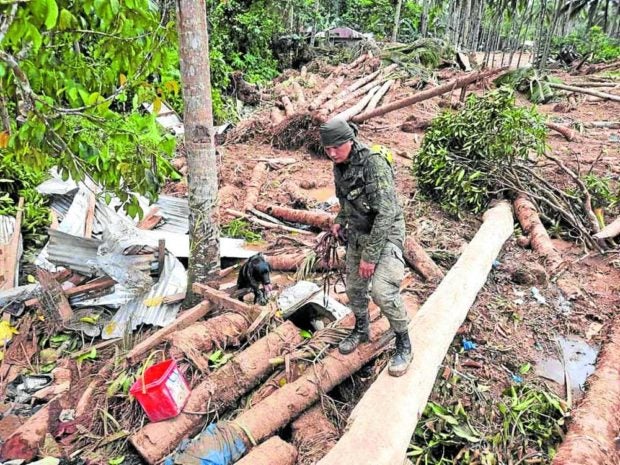 SEARCH CONTINUES | A soldier and his dog on April 18 search through the rubble hoping to find residents who went missing after a landslide hit Barangay Kantagnos in Baybay City on April 10. (Photo courtesy of the Army 802nd Infantry Brigade)

TACLOBAN CITY, Leyte, Philippines — The government has declared the village worst hit by the April 10 landslides in Baybay City, Leyte, to be unfit for occupancy.

Celestina Caranza, chief geologist of the Bureau of Mines and Geosciences (MGB), said her team recommended to the city government of Baybay to close Barangay Kantagnos and prevent residents from returning there because it was “too hazardous.”

The landslides in Kantagnos, the area worst hit by Tropical Storm “Agaton” (international name: Megi) were water-induced due to the huge volume of rainwater that the storm dumped, she said.

“Our recommendation is not to allow the community to reside there because it is now too hazardous. [In fact], our recommendation was for the city to also close all areas which were classified as moderate to high risk to landslides,” she said.

Kantagnos is a farming village with more than 600 residents and located about 15 kilometers away from the city center of Baybay.

As of Tuesday, the city disaster risk reduction and management office said the death toll in Baybay stood at 120 with Kantagnos having the highest number of fatalities at 59. At least 63 residents in Baybay remained missing.

Caranza said the city government should revisit its comprehensive land use plan to avoid similar incidents.

Barangay Kantagnos Councilman Alex Toongo said they were not disputing the MGB report and recommendation.

“I have no intention to return to Kantagnos because I am afraid of what would happen, considering the cracks seen at Mt. Mastalisik,” he said.

Toongo, 57, said he was grateful that his wife and three children managed to escape the landslides.

Reports from the National Disaster Risk Reduction and Management Council (NDRRMC) on Tuesday showed the death toll from Agaton rising to 175.

Albay Rep. Joey Salceda said the deaths in the wake of Agaton were “unacceptable” and “frustratingly avoidable.”

“That kind of casualty level is unacceptable. We knew this typhoon was coming. We knew areas that were vulnerable. Those deaths were neither completely unpredictable nor unavoidable,” he said, as he pushed for the creation of a Department of Disaster Resilience as the first order of business in the next Congress.

“More could have been done, but institutional handicaps are [there]. And those handicaps kill,” he said.

The NDRRMC said the number of missing persons remained at 110, mostly from Eastern Visayas with 104.

Search, rescue and retrieval operations in the villages of Mailhi and Bunga in Baybay have been terminated, while operations continued in Kantagnos, the NDRRMC said.

Damage on crops caused by Agaton has breached the P1-billion mark, the Department of Agriculture (DA) said.

The DA has prepared at least P662.5 million in financial assistance to affected farmers and fishers.

The Chinese government has donated P10.2 million to the Philippine government to support relief efforts for storm victims.

“Our hearts go out to all the Filipino families who were devastated by Tropical Storm Agaton,” Chinese Ambassador Huang Xilian said in a statement.

36 die in Leyte landslides due to ‘Agaton’