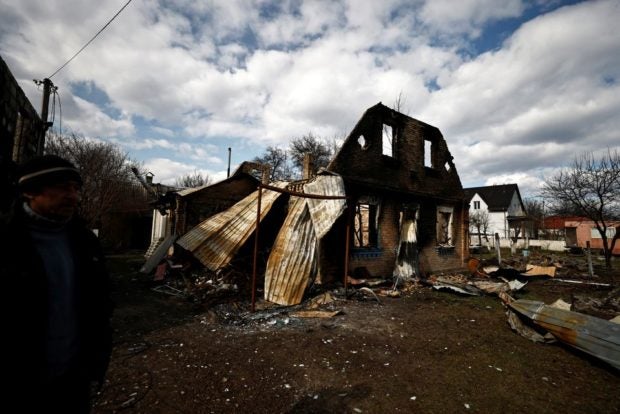 A view of a house that was destroyed by Russian shelling, amid Russia’s invasion of Ukraine, in Bucha, in Kyiv region, Ukraine April 4, 2022. REUTERS/Zohra Bensemra

KYIV — The aim of Russia’s new military offensive in east Ukraine is to grab land, establish an overground link between territories in the east and Crimea, and crush Ukraine’s armed forces, Ukraine’s defense ministry said on Tuesday.

Ministry spokesperson Oleksandr Motuznyak said Russian forces were attacking along the entire frontline in eastern Ukraine, pressing their siege of Mariupol in the south and trying to encircle cities in the regions of Donetsk and Luhansk.

“The goal is to defeat the Ukrainian forces, to establish control over the territory of the Luhansk and Donetsk regions, and establish a land corridor to Crimea,” Motuznyak told a briefing.

Russian-backed separatists who rose up in 2014 have declared so-called people’s republics in a territory they control in parts of the Luhansk and Donetsk regions.

Ukrainian officials have repeatedly said Moscow wants to seize Mariupol and all the territory that Ukrainian government forces still hold in Luhansk and Donetsk to create a land link with Crimea, which Russia seized and annexed in 2014.

“The main efforts are to break through the positions held by Ukrainian troops and they have not stopped trying to gain full control over Mariupol,” Motuznyak said.

Summing up Russia’s tactics, he said: “Usually, they are: powerful artillery preparation, an attempt to storm particular positions, attempts to stymie the actions of units of Ukraine’s armed forces, attempts to surround our units, and to capture settlements. Russia is mainly waging war according to the textbooks of the Soviet era.”