Still no word on 34 missing in ‘e-sabong’ abductions 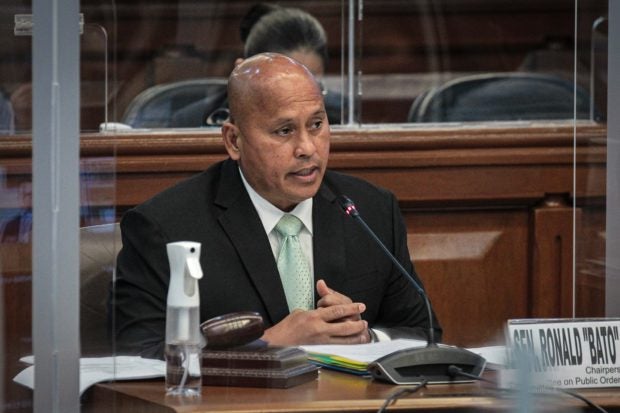 MANILA, Philippines — The Senate Committee on Public Order and Dangerous Drugs on Monday wrapped up its investigation of the abduction of 34 persons for their alleged involvement in online cockfighting (“e-sabong”) activities, but the inquiry gave little hope to families of victims about finding their missing loved ones while gambling activities in line with e-sabong continues to thrive.

Senators led by Ronald de la Rosa, committee chair, sounded frustrated over the outcome of the panel’s four hearings, beginning in March, with a resounding call for the stoppage of e-sabong operations, but only to be rebuffed by President Duterte.

“The testimonies of the witnesses as well as the other pieces of evidence presented to this committee is more than sufficient to speak for themselves,” Dela Rosa said.

The Senate launched in March its investigation of the then rising number of disappearances related to cockfighting and online cockfighting activities, which occurred in various periods but with stark similarities on how they were carried out.

In most of the cases, the victims were suspected of involvement in “paninyope,” or game-fixing, schemes; often, they were last seen being held by the cockpit arena’s security forces to shed light on “some problems,” witnesses had told the Senate committee.

Ang had denied involvement in the abductions, and cried “conspiracy” by his rivals in the gamefowl industry for what he termed as “trial by publicity.”

After the committee’s first hearing, the Senate came out with a resolution calling for a stoppage of e-sabong activities and the suspension of all issued e-sabong licenses, but this was turned down by Malacañang.

On Monday, Dela Rosa called on the Philippine National Police, the National Bureau of Investigation and the Department of Justice to hasten the filing of charges against those involved in the abductions, including members of the police force.

“I hope and I pray that even if Congress has already adjourned [the hearing], this case cannot go on [unresolved] forever; otherwise, people will think that we have other agenda in this investigation,” he said.

Gen. Eliseo Cruz, chief of the Criminal Investigation and Detection Group, which handles the investigations of the disappearances, said they had already filed kidnapping and robbery charges against five police officers and “several John Does” (unidentified persons) who were said to be involved in the kidnappings.

Dela Rosa felt displeasure at the involvement of police officers in the abductions, even as he expressed hope that the perpetrators will be brought to justice, including the “influential people” behind them.

“It pains me that you are being dragged into cases like these, when you are supposed to be my most loved unit of the PNP for your antidrug efforts,” he said, addressing PNP officers who attended the hearing after they were tagged by witnesses as having a role in the abductions.

In its initial recommendations, the committee called on Congress to create a law that will regulate the e-sabong industry, which includes limiting its operations only on Sundays and legal holidays.

The committee also pushed for the “immediate” collection of taxes from e-sabong operations and penalize those who fail to pay the correct taxes.

Dela Rosa said the committee was also recommending the mandatory imposition of installation of closed-circuit television cameras, not only in betting stations, but also in the actual cockfighting areas.