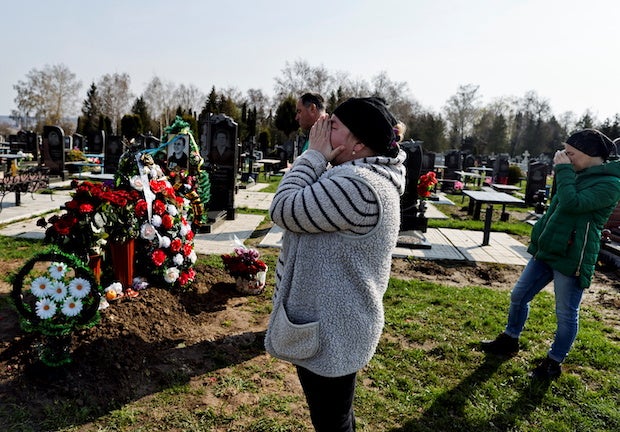 Natalia Evdokimova, 46, mourns her son Dmytro Evdokimov, 23, who was killed in a battlefield near Izium in Kharkiv region, beside his grave at the cemetery in Trostianets, Sumy region, Ukraine April 16, 2022.(REUTERS/Zohra Bensemra)

TROSTYANETS, Ukraine — The handmade sign on the gate warns “The cemetery is mined. Danger.” but residents of the formerly occupied town of Trostyanets in northern Ukraine still come to visit the fresh graves of family killed in the war.

The graveyard in this town in Sumy region has only been partly made safe since Russian forces planted mines there as they pulled back in early April, cemetery manager Olena Matvienko said.

“De-mining teams came later and de-mined it partially. Then they didn’t go further inside,” Matvienko said on Saturday, standing in the cemetery where a number of gravestones were shattered or riddled with bullet holes.

Some areas were still dangerous for people, she said.

Even so, mourners gathered around different graves, some clutching bunches of spring flowers.

One of those disregarding the warnings was Natalia Evdokimova, 46. She and her husband were visiting the grave of their son Dmytro, a Ukrainian soldier who was killed on the northeastern frontline on March 29 and buried back home soon after Russian forces left the area.

She said her son, who was fighting near the town of Izyum in the Kharkiv region, had been most worried about what might happen to his parents under Russian occupation.

“‘Mom, leave, it will be too dangerous in Trostyanets,’” Evdokimova recalled him saying, tears spilling down her cheeks. “And he went to hell himself, near Izyum. And died there.”

Her husband stood silently at the flower-heaped grave. Before they left, Evdokimova reached both her hands towards a framed photo of her son that was attached to the grave marker, as if trying to hug him.

Russia denies its troops are killing or targeting civilians or have carried out war crimes in occupied areas of Ukraine since the Feb. 24 invasion. Reuters could not independently verify casualty estimates or accounts of deaths in Trostyanets.

The cemetery manager said a further 20 people had recently been buried in the cemetery, who had died while Trostyanets was occupied.

Mayor Yuri Bova told Reuters that at least 50 people are estimated to have died or been killed while Russian forces controlled the town, which had a pre-war population of around 20,000.

“Some of them were just shot on the street, some were found with tied hands, eyes taped. We found people in villages shot in the head,” he said.