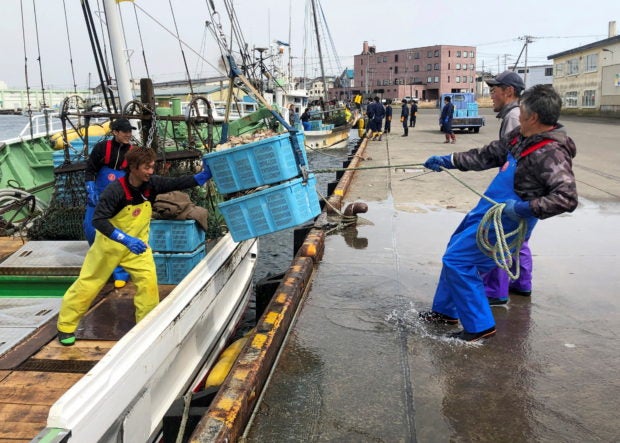 NEMURO, Japan — Japanese fisherman Tsuruyuki Hansaku was barely out of high school when he served 10 months in a Soviet prison, arrested at sea on his father’s boat for catching cod in what the Russians considered their territory.

The silver-maned resident of the northern Japanese fishing town of Nemuro, now 79, is still on edge because of the sway Moscow has over the fortunes of his family fisheries business, and of his hometown.

With Russo-Japanese relations unraveling over the crisis in Ukraine, no Japanese community has felt the fallout quite like far-flung Nemuro.

The concern this time is the fate of annually held talks between the two governments to set the quota for Japan to catch salmon and trout in the Amur River.

The so-called salmon-trout negotiations date back to 1957 and usually wrap up by March, leaving plenty of time before the traditional start of the drift-net fishing season on April 10. The talks have long been touted as the only diplomatic channel that remained between two nations even through the testy Cold War era.

This year, they have yet to conclude. Japanese government and industry insiders say the delay is a demonstration of Moscow’s anger over economic sanctions that Tokyo joined its allies in imposing following Russia’s invasion of Ukraine.

Japan’s fisheries industry also needs Moscow at the table for three other annual negotiations that cover products such as kelp and Pacific saury in some of the world’s richest fishing grounds.

“If we can’t fish, we can’t live here,” Hansaku, whose company now mainly catches and processes Pacific saury, told Reuters at his home this week.

“It’s a matter of survival for us.”

The annual drift-net fishing season for salmon and trout within Japan’s exclusive economic zone (EEZ) runs from April to June. Japan needs Moscow’s permission to catch the fish even within its own EEZ because of a mutual agreement that grants rights to the fish to the country of origin.

Japanese government ministers had no update on the ongoing talks which entered the fifth day on Friday.

The economy of Nemuro, a town of 24,000 at the far-eastern tip of the island of Hokkaido, is highly dependent on Russia, both for fishing and because of visits by Russian boats, despite decades of dispute over four islands in the region.

Following Japan’s defeat in World War Two, Moscow took control of the islands that stretch out from Nemuro in what Tokyo still considers an illegal occupation. Many former residents of those islands – known as the Northern Territories in Japan and the Southern Kuriles in Russia – settled in Nemuro. The territorial spat is the main reason Japan and Russia have yet to sign a postwar peace treaty.

Around town, reminders of Russia are everywhere: Cyrillic road signs and signboards demanding the return of the disputed islands. At Nemuro’s main Hanasaki port, Russian boats regularly dock to deliver sea urchins, crab and kelp to local importers. Before the pandemic, Russian fishermen could be seen venturing into town to buy TVs and other goods to take home.

Hansaku is the quintessential Nemuro denizen.

He was two in 1945 when his father, returning from the war, moved his family to Nemuro from Shikotan, one of the islands seized by the Soviets.

After his jailing at the age of 19, Hansaku took over the family business as most first-born sons were expected to. The work could be dangerous: Japanese fishing boats were captured with such regularity during the Cold War that the Soviets ran a Japanese-only prison on Sakhalin island that Hansaku said held more than 100 inmates, including his father and brother, when they were there in the early 1960s.

“It’s all part of the tragedy brought on by war,” Hansaku said. “We had to fish to put food on the table and you didn’t think about the dangers involved.”

Since the 2016 season, President Vladimir Putin has banned drift-net fishing for salmon and trout in Russia’s EEZ. Because of the reduced fishing grounds, Nemuro and two neighboring towns took a $200 million hit the following year, according to an estimate from the city and a local bank.

“My biggest worry is that all four negotiations will fail,” said Shigeto Hinuma, 71, a local fishmonger who saw revenues fall by 30% at his central Nemuro store in the wake of Russia’s drift-net fishing ban.

Hansaku, who had taken part in talks for a quarter-century until the ban – he counts more than 20 trips to Russia – was among those who gave up salmon-trout fishing altogether.

Now the fishing grounds in the Japanese EEZ are also in danger for those who are still in the game. Even if an agreement is reached in the ongoing salmon-trout talks, Hansaku’s Pacific saury trade remains at the mercy of Moscow.

The conditions for this year’s fishing for Pacific saury, which takes place from August, were agreed late last year, but Russia still needs to issue the permits, Hansaku said. With Japan expelling several diplomats and ending Russia’s most-favored-nation status last week, the fate of the permits, as well as the other bilateral talks, is uncertain.

“For the fisheries trade to disappear is unfathomable,” Hansaku said, adding that the spillover effect would spread to the rest of Japan.

“If we lose the industry, we’ll lose our culture with it. There’s no culture where there is no prosperity.”