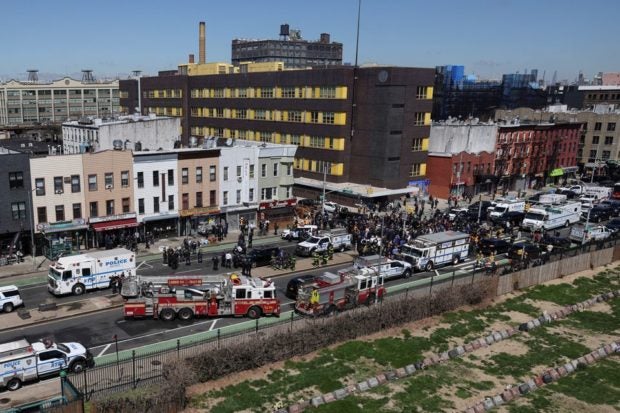 General view of the scene of a shooting at a subway station in the Brooklyn borough of New York City, New York, U.S., April 12, 2022. REUTERS FILE PHOTO

NEW YORK — Hourari Benkada said he was riding the New York City subway on his way to work on Tuesday morning when a masked man next to him discharged a smoke bomb and later opened fire.

Benkada, 27, said he rushed to help a pregnant woman as people pushed through the subway car to flee and was hit in the leg, blood gushing from the wound.

From his hospital bed Benkada told CNN the shooting “makes me not want to ride the train ever in my life.”

Benkada was among at least 23 people injured in the rush hour shooting in the Brooklyn neighborhood of Sunset Park. In addition to gun-shot wounds, some of the victims suffered from smoke inhalation, injuries sustained while fleeing the scene and panic attacks, according to officials. No one suffered life threatening injuries.

On Tuesday evening, New York Governor Kathy Hochul visited Brooklyn’s Maimonides Medical Center where she met the mother of a 16-year-old victim who had just had hand surgery to save his thumb.

“His mother does not speak English, she is Chinese, she is there alone and it was so sad to hear her from a translator talk about her anxiety,” the governor told reporters. “All she has is her son.”

The 62-year-old man suspected of setting off smoke bombs and shooting 10 passengers in the subway attack was arrested by police on Wednesday after a day-long manhunt.

Police said the gunshot victims were three women between the ages of 41 and 49 years old and seven boys and men aged 15 to 41 years old.

Videos captured by witnesses showed panicked passengers streaming out of the N line subway car as smoke pours onto the platform. Amid the fear and chaos, some rushed to aid the injured, applying pressure on wounds and calling for help.