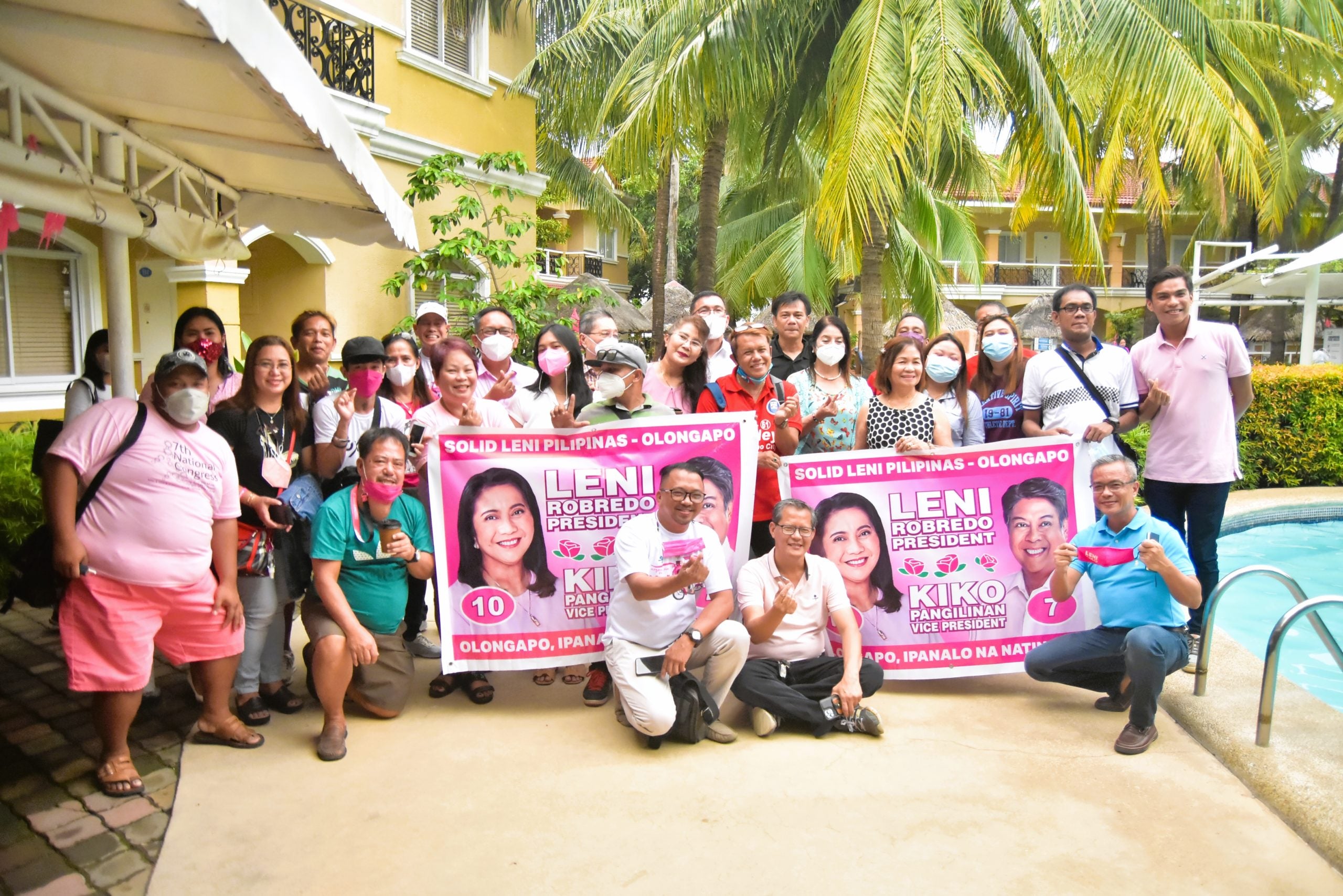 Despite their affiliations with different political parties, candidates in Olongapo City come together to throw their support behind the presidential candidate Vice President Leni Robredo during a political meeting on Monday in Subic Bay Freeport. (Contributed photo)

Patrick Escusa, Solid Leni Pilipinas Olongapo coordinator, on Wednesday said local candidates from at least three national political parties pledged their support for Robredo, pointing out that her victory in the coming polls is the “bigger interest at stake.”

On Monday, the SLP Olongapo movement organized a meeting at a resort inside the Subic Bay Freeport and was attended by several local candidates in Olongapo.

Among those who attended and expressed support for Robredo were the Liberal Party bet in the mayoral race, Anne Gordon; Olongapo Vice Mayor Jong Cortez, who is seeking reelection as an independent candidate; city councilor Kaye Ann Legaspi, who is running for another term under Aksyon Demokratiko; and several aspirants for a seat in the city government.

“This was the first time in recent history that politicians in the city banded together for a common presidential candidate,” Escusa told the Inquirer.

Escusa said five other Robredo supporters running for the city council were not able to attend the meeting due to other commitments. They are incumbent councilor Jerome Bacay and barangay captain Ying Anonat, who are both running under the Nacionalista Party; barangay chief Gilbert Piñero, who is affiliated with the Aksyon Demokratiko team; and independent candidates for councilor Edwin Esposo and Dante Hondo.

“Let us forget our personal politics and instead look to a higher calling—that is, to ensure that Vice President Leni wins,” Cortez said during the meeting.

“This is born of necessity,” Cortez added, referring to their support for Robredo. “We may have our political parties at the local level, but for VP Leni we should forget our differences and work for the sake of our country.”

Gordon, on the other hand, spoke for the local Liberal Party and expressed the common desire to elect a president who will put above all the interests of people at the grassroots.

“This is not for our interest, but for that of the country,” echoed Legaspi. “I may belong to a different political party, but I now stand here because of my love for VP Leni.”

At the same meeting, local Diwa Partylist consultant Rowena Quejada pledged her support for Robredo despite her portrayal of the character “Mosang” in some social media short films critical of Robredo.

Quejada said that while she had a contract with Vincentiments, which produced the “LenLen” series, she had decided to come out for Robredo.

“Hindi ko kayang ipagpalit ang prinsipyo ko—kahit hindi ko na siguro makuha ang bayad ko para sa dalawa pang shooting (I cannot just abandon my principles, even when I may not be able to get my pay anymore for the last two episodes),” she said.

Lawyer Angel Orozco, the lead convenor of SLP-Olongapo, said their group would continue to reach out to other candidates who support Leni despite their local party affiliation.