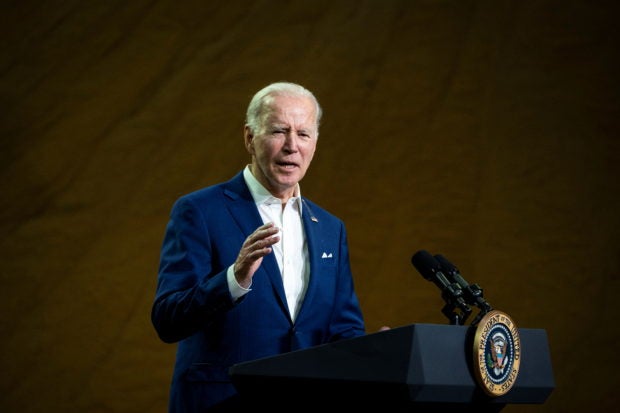 DES MOINES, Iowa — U.S. President Joe Biden said for the first time on Tuesday that Russia’s invasion of Ukraine amounts to genocide, a significant escalation of the president’s rhetoric.

Biden used the term genocide in a speech at an ethanol plant in Iowa and later stood by the description as he prepared to board Air Force One.

“Yes, I called it genocide because it has become clearer and clearer that Putin is just trying to wipe out the idea of being able to be Ukrainian and the evidence is mounting,” Biden told reporters.

He added: “We’ll let the lawyers decide internationally whether or not it qualifies, but it sure seems that way to me.”

“Your family budget, your ability to fill up your tank, none of it should hinge on whether a dictator declares war and commits genocide a half a world away,” Biden said at an event in Iowa on fuel prices.

Secretary of State Antony Blinken and national security adviser Jake Sullivan have both stopped short of describing Russia’s assault as a genocide in recent days.

“Based on what we have seen so far, we have seen atrocities,” Sullivan told reporters last week. “We have seen war crimes. We have not seen a level of systematic deprivation of life of the Ukrainian people to rise to the level of genocide.”

Shortly after Biden’s remarks, Ukrainian President Volodymyr Zelenskiy tweeted, “True words of a true leader @POTUS Calling things by their names is essential to stand up to evil.”

Under international law, genocide is an intent to destroy – in whole or in part – a national, ethnic, racial or religious group.

According to U.N. convention, this includes through killings; serious bodily or mental harm; inflicting lethal conditions and measures to prevent births, among other means.

Biden has made a handful of statements about the war that U.S. officials have later had to walk back. The president stirred controversy on a recent trip to Poland when he ad-libbed a line at the end of a speech and said that Putin should not be allowed to remain in power. The White House clarified that U.S. policy was not to seek regime change.

Genocide, considered the most serious international offense, was first used to describe the Nazi Holocaust. It was established in 1948 as a crime under international law in a United Nations convention.

Since the end of the Cold War, the State Department has formally used the term seven times. These were to describe massacres in Bosnia, Rwanda, Iraq and Darfur; the Islamic State’s attacks on Yazidis and other minorities; China’s treatment of Uighurs and other Muslims and this year over the Myanmar army’s persecution of the Rohingya minority. China denies the genocide claims.

At the State Department, such a determination normally follows a meticulous internal process. Still, the final decision is up to the secretary of state, who weighs whether the move would advance American interests, officials said.