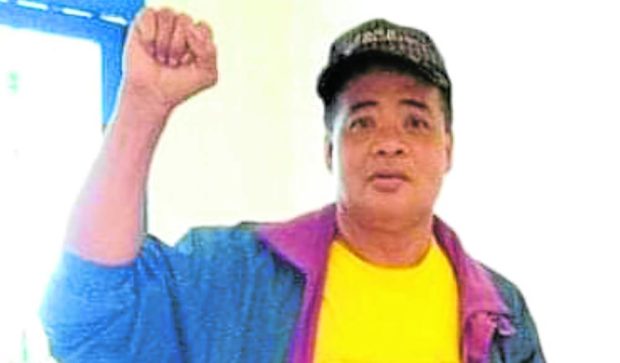 BAGUIO CITY, Benguet, Philippines  — Human rights and peasant groups are calling for the release of Anakpawis party list’s fourth nominee Isabelo Adviento, who was arrested on April 8 while eating in a fast-food restaurant in Bayombong town, Nueva Vizcaya, over a “trumped-up” case.

Adviento was taken around 8 p.m. by operatives from the military, police and the National Intelligence Coordinating Agency on the strength of an arrest warrant issued by Judge Pablo Manuel Agustin of Branch 10 of the Regional Trial Court in Tuguegarao City on June 17, 2021, for alleged illegal possession of firearms and explosives, the groups said.

Adviento, the Anakpawis coordinator in Cagayan Valley, is currently held at the police station in Bayombong town.

The peasant group Taripnong Cagayan Valley on Sunday insisted the case against Adviento was trumped up, claiming that soldiers and policemen who entered his home in the December 2020 raid allegedly “planted” the firearms and grenades found in his home.

The group added that Adviento was not around when the government forces raided his home because he was busy distributing relief goods to farmers at the time.

Members of Katribu Kalipunan ng Katutubong Mamamayan ng Pilipinas, a national alliance of regional and provincial indigenous peoples’ organizations, have held a protest action in front of the Commission on Human Rights (CHR) in Quezon City on Saturday to condemn Adviento’s arrest.

According to the protesters, Adviento’s arrest was part of the state’s systemic persecution of activists and human rights defenders. They reiterated their opposition to Red-tagging, filing of trumped-up cases, unjust arrests, harassment and all forms of human rights violations.

Anakpawis president Ariel Casilao, in a press statement on Sunday, said Adviento had endured continued harassment and Red-tagging for years prior to his arrest.

“Adviento, a known peasant activist, has been a constant target of Red-tagging, threat, harassment and intimidation by state forces. His arrest is meant to harass Anakpawis party list and its supporters,” Casilao further said.

Casilao said that for several years now, Adviento was subjected to nonstop Red-tagging, including posts on social media of various Philippine National Police pages. His name and photos were plastered on tarpaulin posters and fliers across Cagayan towns, unjustly branding him as an “NPA (New People’s Army) recruiter.”

The continued Red-tagging prompted Cagayan Valley activists to launch the “Hands Off Isabelo Adviento” campaign in November 2021 to seek assistance from the CHR, the Department of Justice and concerned groups to look into his case and “stop this dangerous pattern of Red-tagging and judicial harassment against activists and human rights defenders.”

In 2015, Adviento was also among 76 activists falsely charged with kidnapping and homicide.

Agnes Mesina, who was arrested on March 2 in Aparri by virtue of an expired warrant, and peace consultant Randy Malayao, who was murdered in a passenger bus on his way home in Nueva Vizcaya in 2019, were among the 76.

The case against Mesina, which also charged Cordillera People’s Alliance chair Windel Bolinget and four others, was dismissed by Tagum Regional Trial Court Branch 30 on July 12, 2021, her lawyers said.

The case stemmed from the killing of Garito Tiklonay Malibato, an indigenous leader of Karadyawan group in Kapalong, Davao del Norte, on March 22, 2018.