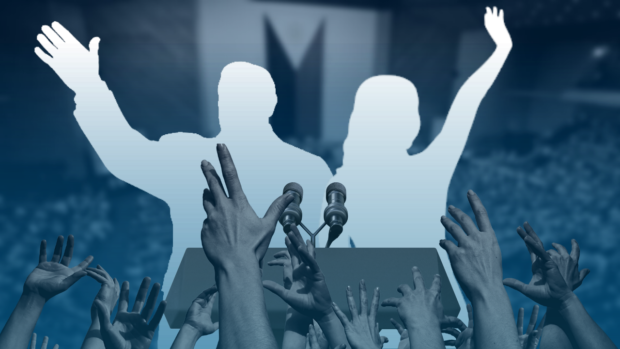 MANILA, Philippines — Following are some of the highlights of candidates’ activities on Week 9 of the presidential campaign for the May 9 elections.

– Proceeded to Gen. Mariano Alvarez, Silang, Carmona and Bacoor, where he met with residents facing eviction in Barangay Molino 4

■ April 8 – Sorties in Laguna started in San Pablo, then Calamba where he joined workers’ program outside regional wage board office calling for P750 minimum wage

Key message: “We’re not affected by the survey results, but the public should expect that we … will double or triple our diligence to reach out to the biggest number of workers, masses who are tired of a hand-to-mouth existence while elitist politicians wallow in the taxes that citizens labored for.” (April 7 statement)

– Received award as one of People Asia magazine’s “People of the Year 2022.”

– Lost the backing of the Cebu chapter of his volunteer network Ikaw Muna, which shifted its support to Vice President Leni Robredo; but another group of supporters launched initiative dubbed “Bus ni Isko,” going on tour in two buses to woo young voters into switching to Domagoso.

■ April 5 – Held Manila events, including inauguration of the Chinese-funded Binondo-Intramuros Bridge, during which he shared the stage with President Duterte

– The two men acknowledged each other but didn’t go beyond pleasantries; Domagoso later praised the President in a tweet after the event

– Rally at Jagna Baywalk with local candidates; revealed that it was a Boholano mayor, Joseph Rañola, who ignited his passion to scrutinize the national budget

– At town hall meeting in Bogo, noted that the town has vast tourism potential but still lacking attention from the national government.

■ April 9 – Faced some 15,000 supporters from Metro Manila and nearby provinces in rally at Quezon Memorial Circle; six senatorial candidates present

Key message: “[Filipinos] deserve nothing less. They have suffered for the longest time and need a break. Senate President Sotto and I are offering ourselves, with all our competence, qualification and experience, to improve the lives of our fellow Filipinos.” (April 9 press briefing)

– Met with 10 governors, led by Quirino Gov. Dakila Cua, president of Union of Local Authorities of the Philippines, at Mandaluyong campaign headquarters and discussed ways to protect his votes

■ April 4 – No public engagement scheduled, but received boost from former President Gloria Macapagal-Arroyo who, turning 75 that day, called on Pampanga voters to give Marcos-Duterte tandem a landslide win

■ April 6- Again no public engagements, but campaign team issued statement urging supporters to “refrain from complacency” after latest Pulse Asia survey showed Marcos as still the front-runner but dropping to 56 percent from 60 percent

■ April 7 – No public engagements this day

Key message: “The Marcos-Duterte tandem is the best symbol of unity because if the one from the North and the one from Mindanao can unite and come together, maybe we can unite the entire Filipino people.” (April 8 speech at rally in Catarman, Northern Samar)

■ April 3 – Flew back to Manila from Dumaguete for Comelec debate

■ April 6 – Scheduled sortie in Nueva Ecija postponed but held motorcade, forum in Caloocan, where for the second time in the campaign he was joined by mother Dionisia

– Said he wold still keep reelectionist Sen. Juan Miguel Zubiri in his senatorial slate, even though he was already dropped by Lacson-Sotto tandem

– Claimed that D and E classes were “misrepresented” in recent presidential surveys, where he lags behind; would accept getting zero vote from A and B crowd but expect strong support from the poor

– Was joined by Dionisia in his Batangas sorties

Key message: “I’m OK. For me, being careful, drinking plenty of water and eating right, having a strong immune system are enough. I’m being hugged by people, sometimes when I’m not even wearing a face mask. God is good all the time; no problem … The truth is, a strong immune system is your best booster shot.’’ (April 9 interview)

■ April 5 – Stumped in Rizal, with rallies in Tanay town and Antipolo City, the latter drawing an estimated 43,000 supporters

■ April 6 – In San Jose, Occidental Mindoro, spoke with “Mindoro 22,” or the fishermen from San Jose town whose boat was rammed by a Chinese vessel and who were left for dead in West Philippine Sea

– Met with Catholic priests from Apostolic Vicariate of San Jose; grand campaign rally in that town drew crowd of nearly 19,000

– Flew to Puerto Princesa City, Palawan, for another rally

– Spoke at education forum at University of Pangasinan; rallies in Bani and Villasis towns, then grand rally in Dagupan that gathered 76,000 supporters

■ April 9 – Sorties in Baler in Aurora, and then in Angeles and San Fernando cities in Pampanga

Key message: “Filipinos know how to respect everyone even if they have different views. What will save us is not our chosen candidates, but the unity of all of us. True unity is based on good character.” (April 9 message after Marcos supporters heckled her at rally in Villasis, Pangasinan)