Robedo rallies supporters in Pangasinan, says ‘harassment’ only serves to spark their enthusiasm 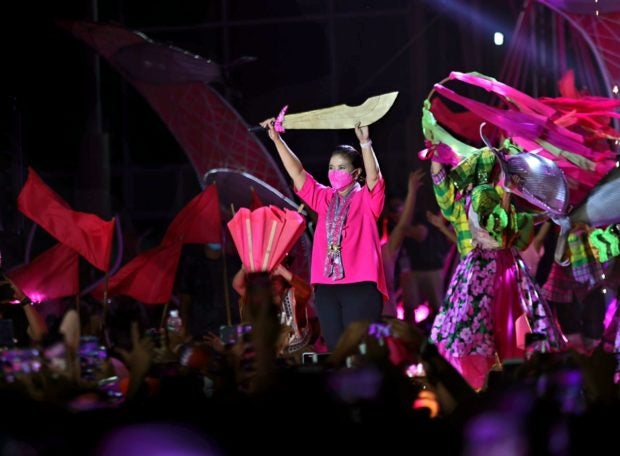 Presidential candidate Vice President Leni Robredo is a modern Princess Urduja in the production number prepared by Pangasinenses for Talindeg Pangasinan: Pangasinan People’s Rally on Friday, April 8, at the CSI Stadia, Dagupan City. Supporters showcased the story of the legendary warrior Princess Urduja, believed to have hailed from the province, through an interpretative dance. (VP Leni Media Bureau)

MANILA, Philippines — Different incidents of harassment during campaign sorties had only lit a fire under her supporters, presidential candidate and Vice President Leni Robredo said in Pangasinan on Friday.

Robredo, in an ambush interview, on Friday was asked about reports that public transportation like buses and jeepneys carrying supporters have been pulled over and stopped, as seen on videos spreading over social media.

She did not confirm whether reports are true, but noted that it would not be the first time that her supporters were harassed.

Different videos spreading on social media showed Robredo supporters inside public transportation being stopped in Dagupan, with several organizers calling on private transport owners for help to ferry people into the venue of the Grand Rally.

INQUIRER.net has sought the side of transport officials, particularly those from the Land Transportation Office (LTO), which was allegedly behind the vehicle stoppages. None of the officials contacted have replied as of posting time.

Senator Francis Pangilinan, Robredo’s running mate for the upcoming elections, mentioned LTO in his speech in an apparent reference to the incident.

Celebrity manager, actor, and rally host Ogie Diaz also poked fun at LTO, saying that the alleged harassment only led to a bigger audience at the Dagupan Grand Rally — with 60,000 attendees filling the spaces as of 7:00 p.m.

Robredo also thanked her supporters for coming despite the difficulties, saying that she was really concerned regarding how her supporters would be able to travel if the transportation methods were cut.

This is not the first time that Robredo’s supporters claimed that there were efforts to derail their participation in rallies.  In Cavite, several supporters accused the provincial government of scheduling road reblocking operations on the eve of Robredo’s rally to allegedly cause traffic.

In Robredo’s rally in Bacolod, several supporters blamed a bus transport company Vallacar Transit Inc. for supposedly canceling the trips at the last minute.  The company however clarified that they cannot just cut off trips as it would be against government regulations.