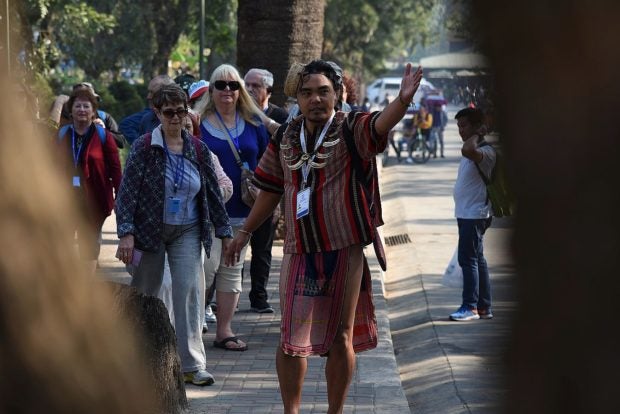 CULTURE GUIDE In this photo taken during the celebration of Ibaloy Day in 2019, a tour guide briefs a group of foreign tourists about the culture of the Ibaloy people, the original settlers of Baguio City. —EV ESPIRITU

MANILA, Philippines — The total number of foreign tourist arrivals in the Philippines have crossed the 200,000 mark, the Department of Tourism (DOT) said on Friday.

Tourism Secretary Berna Romulo-Puyat, in a statement, said the total number of tourist arrivals in the country is now at 202,700 as of Thursday, April 7.

Puyat said foreign arrivals from the United States topped the list with 43,744 visitors since the country reopened its borders to foreign leisure tourists in February.

“The sustained influx of tourists in the Philippines is a good measure of the industry’s success in its preparations to welcome foreign tourists in the new normal,” Puyat said.

The Philippines opened its borders to foreign tourists on February 10, after imposing travel restrictions for nearly two years due to the COVID-19 pandemic.